Before you get too excited (as I did) about the word "movie" in the title of this blog entry, no, this is not a movie made from Chandrayaan-1 Moon Impact Probe images as it descended to its crash into the lunar surface near the Shackleton crater at the south pole. I haven't seen such a movie yet. This is a very low-resolution movie made from data from Chandrayaan-1's high-resolution camera as it traveled in its 100-kilometer orbit over the south polar region of the Moon. Here's a link to the ISRO page with the movie (the animation does not work for me with Firefox, only with Internet Explorer) and here's a direct link to the .wmv file.

ISRO has also released two images from that high-resolution camera, the Terrain Mapping Camera. Here's one of them: 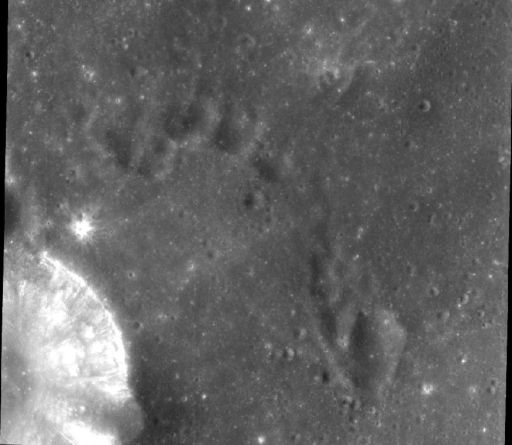 Chandrayaan-1's Terrain Mapping Camera snapped this image of the Moon shortly after entering orbit on November 13, 2008. In the lower left is a portion of the crater Torricelli C. Torricelli C (not all of which is visible here) is 11 kilometers in diameter. The entire image is approximately 20 kilometers across.
The caption on the ISRO website says that the crater in the lower left is Torricelli; thanks to Phil Stooke I know that it's actually a satellite crater of Torricelli called Torricelli C. Here's a Lunar Orbiter IV image of the same general area: 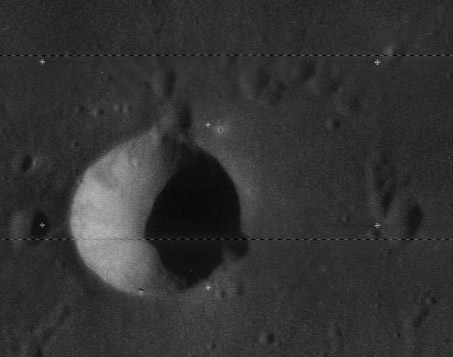 A small segment of a Lunar Orbiter 4 image of the Moon contains Torricelli C, an 11-kilometer-diameter crater to the northwest of Torricelli. The full image may be downloaded from the Lunar and Planetary Institute's Lunar Orbiter Photo Gallery here.
The biggest difference between these two images is simply the lighting angle. The Lunar Orbiter image has the Sun coming in from quite an oblique angle, which makes dark shadows and emphasizes topography (the shape of the landscape), which makes it difficult to see color variations across the surface. The Chandrayaan-1 image, on the other hand, is taken with the Sun much closer to being overhead, de-emphasizing topography and instead bringing out brighter and darker intrinsic colors to the surface. (Scientists are probably cringing every time I say "color." They want me to say "light-toned" and "dark-toned" because this is a black-and-white image with no color information. I'm sorry, more people will understand what the heck I'm talking about if I say "light-colored" and "dark-colored.)

Apart from that, it's hard for me to say much about this image. I don't even know it's the full resolution that the camera is capable of. I guess I'm just looking forward to more!

Here's a wider shot of the Lunar Orbiter image for context, and a map showing the names of the craters. 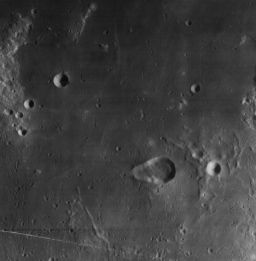 A small segment of a Lunar Orbiter 4 image of the Moon contains the oddly-shaped double crater Torricelli and several satellite craters. The full image may be downloaded from the Lunar and Planetary Institute's Lunar Orbiter Photo Gallery here.