Press conference on the Roadmap to Space

Lou sent me this report on how yesterday's press conference on the Roadmap to Space went. Thanks Lou! --Emily

Yesterday we presented The Planetary Society's new Roadmap to Space to a crowded press conference in Washington DC. Society President Jim Bell, and Board member Scott Hubbard and I conducted the conference at the National Press Club. Our past President Neil deGrasse Tyson, and Apollo 11 Astronaut Buzz Aldin joined us there for the question and answer session with reporters. 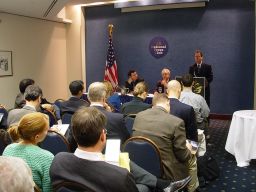 A briefing on The Planetary Society's Roadmap to Space was held at the National Press Club on November 13, 2008.
One question I was asked was whether we had presented it to the Obama Transition Team yet. I had to say, "I don't know." We have distributed the report widely among space program leaders and potential decision makers, but since the team members are not yet announced, I can't say whether we included any of them or not. We do of course intend to brief not only transition team members, but also Congress and Administration officials about the recommendations. We've started that process already, with meetings on Capitol Hill and with NASA and other current Administration people involved in budget formulation and decision making about future programs.[Lou also forwarded me this note he sent to a reporter who asked him to elaborate on one of the Roadmap's key components, separating the goal of getting humans to Mars from the goal of establishing a human presence on the Moon. --ESL]

Building the interplanetary capability will provide accomplishments of setting new records along the way to Mars, in a way that the Moon base does not. We have sent humans to the Moon before. We, and others, will do so again. That is a step to Mars, but still only one that keeps us in Earth orbit. The interplanetary steps: FIRST trip beyond the Moon, FIRST trip beyond Earth's gravity well; FIRST step into interplanetary space; FIRST mission to a Near-Earth Object; FIRST mission to the Mars gravity well, etc. -- these will all keep public interest and keep us going to Mars.

The Moon landing can and should be engineering step in this mix; but not until we have borne the costs of the interplanetary transportation development. Doing it the other way around will bog us down on the Moon, and could indefinitely delay the new accomplishments of getting beyond it.