The Outer Planets Assessment Group, or OPAG, is meeting this week at Arizona State University, primarily to examine the progress of the two major Outer Planets flagship mission studies, one of which will be selected by NASA and ESA in January. The two missions that are being considered are a Europa Jupiter System Mission or EJSM and a Titan Saturn System Mission or TSSM. Not long after the meeting is over, the presentations on these proposals should be posted to the OPAG website, so if you're curious about them, go check those presentations out.

I generally don't pay a lot of attention to missions that are still on the drawing board, because I have quite enough to keep me busy just following missions that are active or are just about to launch. So I've been actively avoiding learning about EJSM or TSSM -- I'll pay more attention when one of them gets selected. Still, my curiosity was piqued by a presentation that was on the OPAG schedule for yesterday afternoon: the proposal of a New Frontiers mission to Neptune. So I tuned in to listen to that. 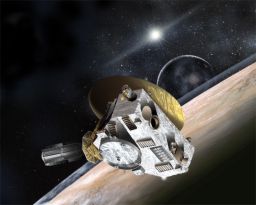 Artist's conception of the New Horizons spacecraft at Pluto and Charon.
First, some background: "flagship" means a more-than-one-billion-dollar mission, usually more like two billion, and there aren't ever going to be more than one of those sent to the outer planets per decade. Cassini's a flagship; the previous one was Galileo, and the one before that was Voyager. Next down the line is New Frontiers missions, which are in the ballpark of 800 million dollars. New Horizons, which launched in 2005 and is on its way to Pluto, and Juno, under construction for a 2011 launch, are the first two in the New Frontiers line; twice a decade seems to be the pace for New Frontiers. You can't do much to an outer planet for anything cheaper than that.

The next flagship mission to an outer planet will either be going to Jupiter or Saturn. That'll be active in the mid 2020s. There is some desire for the next flagship mission after that to go to the Neptune system. But, for a variety of reasons, it's not going to happen anytime soon -- not until the 2040s at least -- and there's no telling whether a compelling case will be made for the next flagship to go to the planet, Jupiter or Saturn, that didn't get a mission in the 2020s. So it could be a long, long, long time before we visit Neptune (nevermind Uranus). 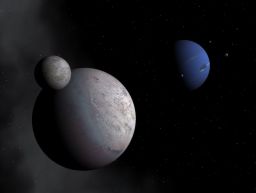 In this artist's conception, Triton and a possible binary companion approach Neptune. Such an encounter could have facilitated Triton's capture to its inclined, retrograde orbit around Neptune. Neptune may once have had other large moons, as in this picture, but they would have been destroyed through the mayhem caused by large Triton's capture to an originally ecentric orbit.
Yet the Neptune system is an increasingly interesting target, not only because Neptune itself is worth studying, but also because it has in its orbit a (likely) captured Kuiper belt object, Triton, and because astronomers are discovering more and more Neptune-mass objects orbiting other stars. We've done in-situ studies of the gas giant planets in our solar system, which inform our studies of large extrasolar planets, but we've only studied the ice giants Uranus and Neptune with the 1970s technology of Voyager.

What to do? Candy Hansen and Heidi Hammel are proposing a mission called Argo that could update our understanding of the Neptune mission at the much lower cost of a New Frontiers mission. But at that price, it would not be an orbiter; it would be a flyby mission. Would it really be worth sending just a flyby mission to Neptune?

If a Neptune flyby was all that we would get out of a New Frontiers mission, the answer would probably be no. But Argo proposes to study Neptune and Triton in a flyby, then go on to a couple of Kuiper belt objects, just as New Horizons is going first to Pluto, then to a couple of Kuiper belt objects. In fact, to keep costs in line, Argo's design would borrow a lot from New Horizons. 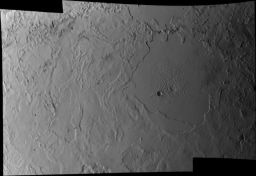 On its closest approach to Triton on August 25, 1989, Voyager snapped several high-resolution mosaics. Triton is considered to be a Kuiper belt object that was captured into Neptune orbit, an event that would have heated it and altered its surface through cryovolcanism. As a result, there are few large craters; a few small ones are visible in this mosaic.
There's a critical difference in the Kuiper belt phases of New Horizons and the proposed Argo mission, though. New Horizons' main goal in the Kuiper belt -- the site that the scientists chose to visit -- is Pluto. After that, it won't have a lot of choice about which other Kuiper belt objects it can visit. It will definitely fly by at least one, hopefully two, very small objects that happen to lie within the narrow, 0.9-degree cone of opportunity that it can get to following its flyby of Pluto. It will be interesting and valuable to study these objects, but they'll be chosen more by happenstance than by intention.

Argo, on the other hand, would be flying by Neptune, which is the third-most-massive planet in the solar system. Flying by Neptune opens up a huge cone of opportunity; with a gravity assist from Neptune, Argo could choose a course into the Kuiper belt that lies anywhere within 60 degrees of its Neptune trajectory -- a total breadth of 120 degrees -- and that's without using any propulsive assistance at all. The Argo mission could choose to visit any one of nine large (400 kilometers in diameter or larger) Kuiper belt objects, some of which are binary (two for the price of one -- like Pluto and Charon), or any one of 40 objects between 200 and 400 kilometers in diameter. I assume that, if the mission were to be selected, they'd eventually settle on a course that could take it past two or more objects of diverse types, trading among all the variables of interest to the science team -- size, surface properties, number of companions, and so on. 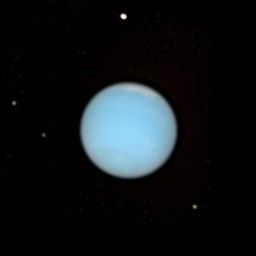 Neptune in natural color, with Proteus (top), Larissa (lower right), Despina (middle left) and Galatea (far left). The brightness of the moons has been enhanced to make them more visible.
And to get to Neptune, Argo would fly by Jupiter and Saturn first. Really, in a way, it's like doing another Voyager 2, except you'd exchange Uranus for a couple of Kuiper belt objects, plus you'd be doing it with technology that is three or four decades more advanced, and you'd be doing it at the cost of a New Frontiers mission instead of a flagship mission. We'd get an intermediate view of Neptune, to fill in the many, many decades that will separate our first look from the eventual flagship mission, whenever it finally gets there.

There was a funny moment in the presentation, when Hansen put up a grid identifying the positions on the science team that will eventually need to be filled. With the spacecraft not launching for a decade, and not reaching its first real science target for two decades, now might not be the best time to identify the science team. "It's not going to be any of us," joked someone from the audience. It's true; there will certainly be some people on that team who are now established researchers, but the majority would likely be people who are currently in graduate school or college. Maybe even high school. Are you in high school right now? Want to drive a spacecraft to Neptune? Argo might just be your chance.