Phoenix update: Not dead yet; still in "Lazarus mode;" one attempt at microphone use did not work

I chatted with project manager Barry Goldstein today, who filled me in on the current status of Phoenix. The bottom line: it's in a survival mode where it's depleting its batteries every afternoon, then waking up the next morning and trying to call an orbiter. The team is working on getting it into a slightly different mode where it does some science instead of continuously hailing an orbiter before it depletes its batteries each day. And, for those of you interested in the microphone: they tried to turn it on about two weeks ago, and it didn't respond; but hope isn't lost yet. Here's the full story.

It is now very early on sol 159. Phoenix has been in "Lazarus mode" since sol 153 (more on that below). Mission controllers have managed to at least confirm the existence of a signal from Phoenix every sol since 153 except for yestersol, sol 158. Barry said there's a lot of reasons why communication might not have worked yesterday. 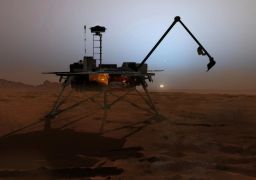 As the Sun sets on Phoenix and polar twilight begins, the spacecraft will no longer be able to charge its batteries and will shut down. Later in the winter, the spacecraft will become buried in ice.
In Lazarus mode, Phoenix basically depletes its batteries every afternoon, what Barry called "browning out." At some point the next morning, when the solar arrays start generating enough power, Phoenix boots up and tries radio communication for two hours. Then it goes to sleep, and depletes its batteries, and the cycle repeats itself. Actually, with the slow return of current from the power arrays each morning, Barry said that the spacecraft "motorboats" -- it attempts to boot, depletes its batteries, browns out, attempts to boot, gets a little further, depletes the batteries, browns out, and repeats until whatever point in the morning there is sufficient current coming from the solar arrays to get the computer all the way through its boot cycle.

The spacecraft's instructions, while in Lazarus mode, are to sleep for 19 hours, then wake up and attempt communications for two hours, and repeat. The 21-hour cycle is designed so that the two-hour comm attempt would drift around the Martian clock until it happened to coincide with a period in which an orbiter would be overhead. However, this is not quite how Phoenix is operating. Because it is browning out every afternoon, the cycle resets itself to zero every time Phoenix wakes up in the morning.

So this means that right now, Phoenix is only attempting communications session in the mornings, which is just about the worst time to be trying to talk to the two orbiters, which are both in afternoon orbits. It's only because of Phoenix' polar location that there's any chance of communications working at all -- the orbiters are in near-polar orbits, so they are reasonably close to the pole once every couple of hours, but the morning time of Phoenix' attempted communications means that the orbiters are low in the sky, so the geometry is not good.

They "totally anticipated" the current mode being typical of the end of the mission, Barry said; they just didn't anticipate that it'd happen quite so soon. It happened about three weeks sooner than expected because of the arrival of a dust storm late on sol 151, which also just happened to be a relatively power-heavy day including the final planned use of a TEGA oven. As soon as they got word of the approaching dust storm, the team "mobilized completely" to try to develop commands to shut down heaters quickly enough to prevent the spacecraft from browning out; they didn't quite make it, but, Barry said, the commands that did get sent up were probably instrumental in Phoenix still being functional now.

They are preparing a set of sequences that will command Phoenix into a "terminal science mode" in which they may still be able to do some science. That terminal science is an ordered list of commands that Phoenix would run through until it browned out; it would attempt to relay the data back to Earth more or less as it acquired it. Barry said I needed to ask mission manager Chris Lewicki for more detail on this, but gave me a simplified overview. First in the list are meteorological (pressure and temperature) measurements, followed by data from the Thermal and Electrical Conductivity Probe. After that, perhaps some attempts at imaging with the robotic arm camera (to see if there's any frost buildup around the probe). Then perhaps some imaging with the mast-mounted camera -- first, an image from whatever position the camera is in, then a try at slewing the camera to a new position, followed by an image. There's more in the sequence, he said; basically it progresses from lower- to higher-energy commands. On any day that it woke up, Phoenix would run through the sequence until it browned out, then wait until the next morning brought power back to the solar arrays, and restart the science plan from the beginning.

They attempted to use the MARDI camera, including its microphone, somewhere around sol 146 (give or take a couple sols). It did not respond. But Barry thought that perhaps they hadn't allowed sufficient time for the instrument to warm up before commanding it to take data. Barry said he has "become a true believer in trying to get the microphone on" ever since Veronica McGregor passed him a message that had been received on the Phoenix Twitter feed from a blind man who pointed out that he never had a chance to see the pictures from Mars; sound would allow him, and others like him, to experience a foreign planet for the first time. Barry said he has instructed the team to include an attempt to use the microphone somewhere in the terminal science mode sequence, but he wasn't sure where it fell. He said they had been planning to do a second try on sol 153, until, of course, they lost control of the spacecraft.

Barry is "very hopeful" that they will successfully command Phoenix out of Lazarus mode and into the terminal science mode. Once they have the sequence ready, it just requires one good communications session. He said that when they do communications sessions, the two orbiters are basically configured to "shove the sequence down the vehicle's throat."

But they don't get good communications sessions every day. There was no successful communication yesterday (sol 158). Sunday (sol 157) was just "aliveness," Barry said -- the link was closed, but not tightly enough for data to flow. The last good day of communications was, if he recalled correctly, Saturday (sol 156), when they got important data on spacecraft health like internal temperature measurements.

As for how the team is feeling: "no one is very depressed," Barry said. While they "do wish it would have gone another three weeks, the team is pretty pleased."

I've updated my sol-by-sol summary, and also the robotic arm camera images page. Here's hoping that this is not the last update to that images page!

Just for fun, here's the full Twitter conversation I mentioned above...