On its way to the Moon, Chandrayaan-1 photographs Earth, but flips the photo

The Indian lunar orbiter Chandrayaan-1 is still on the long loop of its latest orbit, but scientists on the mission aren't wasting any time; they've turned one of its cameras toward its erstwhile home, Earth. I love it when planetary spacecraft take images of Earth -- there's just something about using the eyes meant to study strange worlds to study our own that produces a fresh perspective on our home planet. Here's the image: 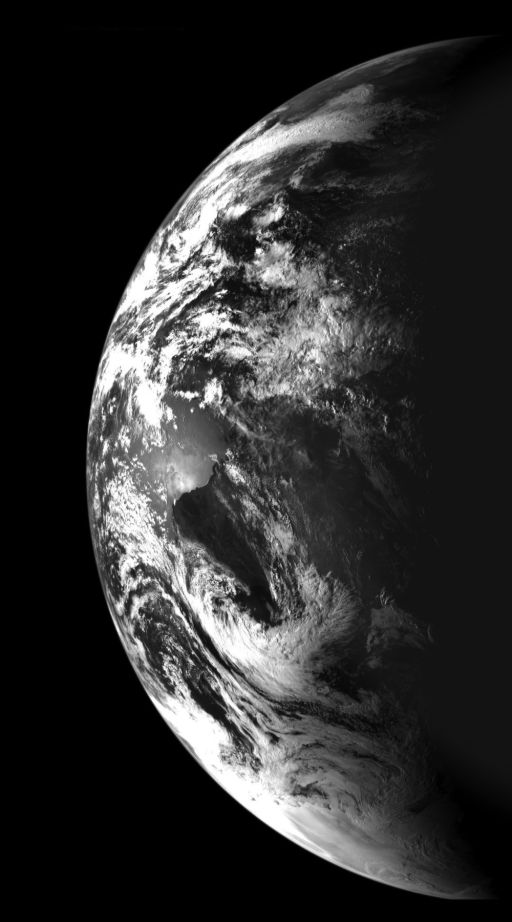 Chandrayaan-1 took this photo of Earth from Earth orbit on October 29, 2008 at 07:00 UTC. Near the center of the disk is the northwestern coast of Australia; the Sun glints off the Indian Ocean adjacent to that coast. This image has been flipped horizontally from its originally published version to match the proper orientation.
If you've seen this image posted on other websites and blogs, you may have noticed that this one is in a different orientation. For some reason, the version initially posted on the Chandrayaan-1 website was flipped horizontally (as though the image were held up to a mirror). What's most funny about that is that it's not the first time this mistake has been made with an image of Earth; the Rosetta team did the same thing with an image of Earth during their November 15, 2007 flyby.

I figured it out because I could not for the life of me make the visible coastline of Australia match up with a map of Australia. I thought we might be seeing Earth from an unusual perspective -- maybe from a high latitude or something -- and that's why I couldn't figure it out. So I decided to go check out what one of our geostationary weather satellites saw at the same time, because those satellites are parked over the equator, and thus have a perspective that's easy to recognize; I figured I could match the cloud patterns in the weather satellite photo with the ones in the Chandrayaan-1 photo to help me orient myself. Here's the image I found, taken by the Japanese satellite Himawari-6 (also known as MTSAT-1R), about an hour before the Chandrayaan-1 photo: 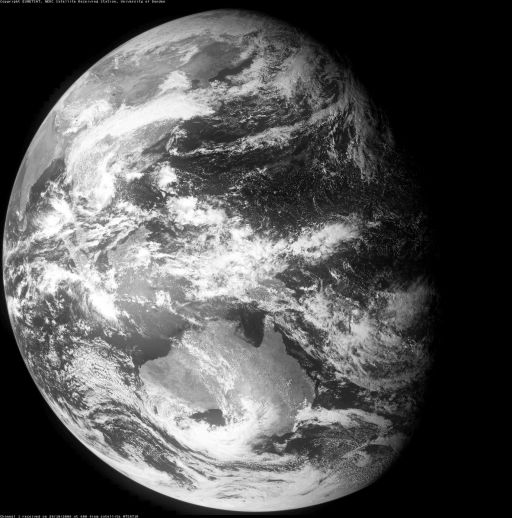 Earth from Chandrayaan-1 as originally published

When the Chandrayaan-1 image of Earth was released to the public, it was erroneously flipped (mirrored) horizontally.
How could they make such a mistake? It's like I said when I pointed out the error with the Rosetta image. Data doesn't come down from spacecraft in familiar formats like JPEG or TIFF; it's a stream of ones and zeroes, with a format unique to the science instrument, and scientists and engineers write their own software for translating that into raw image data. There are varying conventions for whether bits are written right or left, and if you take that raw image data and open it up in a piece of off-the-shelf image processing software, the image might be backwards. (I have this problem when I try to open up Mars Reconnaissance Orbiter CTX images.)

If you're in a hurry, and you don't yet have a lot of experience working with your spacecraft's data -- as is certainly the case for a newly launched spacecraft that you're trying to ballyhoo to your taxpayers with quick press releases and status reports -- it'd be easy to make that mistake. It's actually much more understandable for ISRO to have made this mistake with a spacecraft launched only a week before, and whose camera was being tested for the first time, than it was for ESA to make the mistake with Rosetta, a spacecraft that had been launched more than three years prior, whose camera had been used during two previous flybys.

The error is not really important. Kudos to the Chandrayaan-1 team; the image is absolutely gorgeous in its detail, and bodes well for the spacecraft's images of the Moon, which will be taken from a much closer distance.