The MESSENGER team has been releasing images daily since their October 6 flyby, and I've just been too busy to post any. I have, however, been keeping up with where the images plot on my map of Mercury. Finally, yesterday, they released one image that resulted an overlapping set of three, which I could mosaic together, so I thought it was time to post. (Other than that set of three, they've been doing a pretty good job of releasing images that don't overlap with any other images!)

Here's my map, indicating the locations of all the image releases to date (though it doesn't include a couple of the images they posted as part of their comparisons to Mariner 10 data). The strings of letters and numbers are the image file names, which encode which camera was used (N for the narrow-angle camera, W for the wide-angle camera), the time on the spacecraft clock when the image was taken (counting up in seconds roughly since launch), and, for wide-angle camera images, the color of the filter that was used (according to a letter code -- here is an explainer I wrote on the MESSENGER camera that decodes those letter codes). 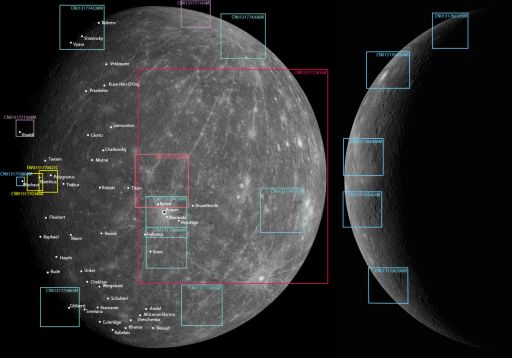 Locations of MESSENGER Mercury Flyby 2 detail images as of October 17, 2008

See in the middle, how there's three overlapping squares? Here, for your pleasure, is a mosaic of those three images, allowing you to examine the wonderful ray system of the crater Kuiper in great detail.

This mosaic is composed of three images captured with MESSENGER's narrow-angle camera as it departed its October 6, 2008 flyby of Mercury. They cover the crater and much of the extensive ray system of Kuiper, a relatively fresh impact crater.
But I think this is my favorite of the images released so far. There are bright rayed craters all over Mercury, and then one or two random dark-rayed craters. What the heck is going on there? It'll be a fun little puzzle. These images are the best available of this feature, at a resolution of about 500 meters per pixel. 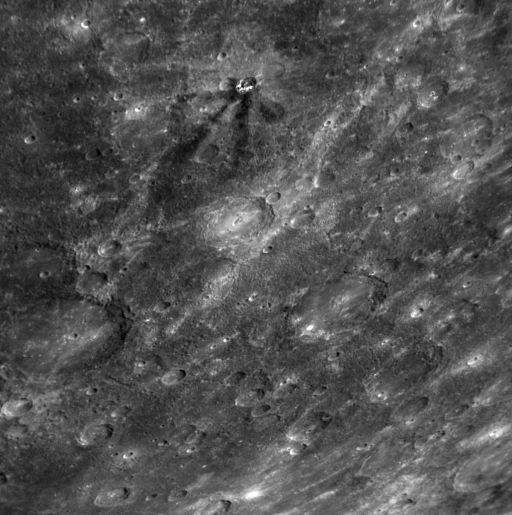 MESSENGER snapped this image as part of a huge, 9-by-11-frame mosaic of the disk of Mercury shot as it receded from its October 6, 2008 flyby of the planet. Near the top of the image is an odd-looking, relatively fresh crater with prominent dark rays. Most rayed craters on Mercury have bright rays; scientists hypothesize that the dark rays are related to an unusual material excavated from beneath the surface by the impact.
A detailed view of that dark-rayed crater: 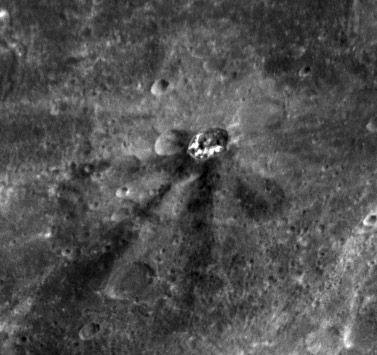 I don't expect to see much more than images out of the MESSENGER team until the end of this month, when they are planning to have a press briefing where they'll reveal their initial analysis of the new science data they acquired during last week's flyby.