I've had so many things to write about lately that I've given short shrift to the drama on the Hubble Space Telescope. In quick summary, on September 27 -- just two weeks before the final Hubble Servicing Mission was due to launch -- a critical component of Hubble's electronics failed. The Science Instrument Command and Data Handling Unit (SI C&DH, for short, though that's not much easier to type than the longhand term, so I think I'll call it the Data Handling Unit) is responsible for processing data from three of Hubble's four main instruments for relay to Earth; without it, only the Fine Guidance Sensors (which are used to precisely measure the positions of stars) remained functional. Fortunately, the Data Handling Unit is internally redundant, having two identical sets of electronics. Hubble has been using "Side A" of the Data Handling Unit since its launch in 1990; Side B has never before been turned on. 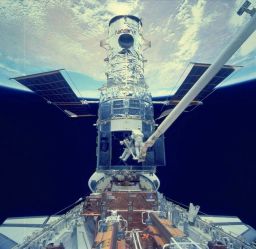 This view was shot from the bay of Space Shuttle Endeavour in December 1993. On this mission, STS-61, astronauts repaired the originally faulty vision of the Hubble Space Telescope.
The obvious task was to switch to Side B. However, it would take a few weeks to prepare, test, test, and test again the commands to do this, so the first thing NASA had to do was to postpone the launch of the Shuttle mission that was scheduled to service Hubble -- because they could always discover that Side B didn't work either, and then the service would be for naught. Finally, on Tuesday, they made a formal decision that they were ready to go ahead with the switch to Side B. They made the switch yesterday, and today they established that the other three instruments are talking to the Side B Data Handling Unit. (Those other three instruments include the Advanced Camera for Surveys (ACS), Wide Field Planetary Camera 2 (WFPC2) and Near Infrared Camera and Multi-Object Spectrometer (NICMOS)). After a few more calibrations are run and tests are performed, NASA states, "A full schedule of science observations with the WFPC2 camera, ACS' Solar Blind Channel camera, and the Fine Guidance Sensors will resume early Friday morning."

That's all good, but, unless they figure out a tricky way to repair Side A from Earth (and I am told that's not possible), it does leave Hubble without a backup Data Handling Unit. So now NASA needs to consider what to do about the next servicing mission. Are they going to need to send up a new Data Handling Unit? If so, will that crowd out so much time that they won't be able to perform some of the other repairs initially planned for the mission? And if they need to send up such a unit, it doesn't seem likely that they can build it quickly enough to have it ready for launch in a few months -- it seems that the launch of the Servicing Mission would have to be delayed much longer. Oops -- several readers, who are clearly much more up on the Hubble and the Shuttle program than I, have written to tell me that there's a spare Data Handling Unit available on Earth, which is going through testing now, and will probably be ready for launch by some time in January. It actually reached a record, I think, for both the number of corrections and the rate at which I received them! I should probably let others who are more expert on these topics write about Hubble and the Shuttle missions -- Phil Plait's been doing a thorough job of covering this particular story, and Astroprof has too.