Phobos: New gravity data and an update on the Phobos-Grunt landing site

ESA issued a press release today announcing that Mars' moon Phobos is a rubble pile because it has an anomalously low density, measured during a recent flyby by Mars Express. As far as I can tell from a bit of Googling, both the fact that it's likely a rubble pile and the low density were already known, though the Mars Express measurement is supposedly more precise than previous ones. They report the mass of Phobos to be 1.072 x 1016 grams (that's 10.72 million million kilograms, in case my superscript isn't working); dividing the mass by its volume gives you a density of 1.8 grams per cubic centimeter. For reference, ice has a density just under one gram per cubic centimeter; the rocks that make up the bulk of Mars' and Earth's crust are denser, at 2.7 to 3.3 or more grams per cubic centimeter. A density of 1.8 is common for icy moons in the outer solar system, but it's pretty low for a body which shouldn't contain any ice, so Phobos likely has a lot of open pore space, and is therefore a rubble pile and not a single chunk of rock. Another line of evidence tells you it's a rubble pile, and that's the size of its giant crater, Stickney; for an impact that large to have produced just a crater and not blasted the moon to smithereens, Phobos has to be a mostly cohesionless rubble pile. There's a nice explanation of that on Bill Bottke's web page.

One of the captions from one of the figures in the press release included some information on the planned landing site for Phobos-Grunt, the Russian Phobos sample return mission that is due to launch next October, carrying our LIFE experiment. "Based on Mars Express' image series, the Russian Federal Space Agency is now considering to move the landing location slightly to the north of the previous one, to a safer area located between 7°-21°S and 214°-233°W." Small body mapping expert Phil Stooke says they meant 7°-21°N. 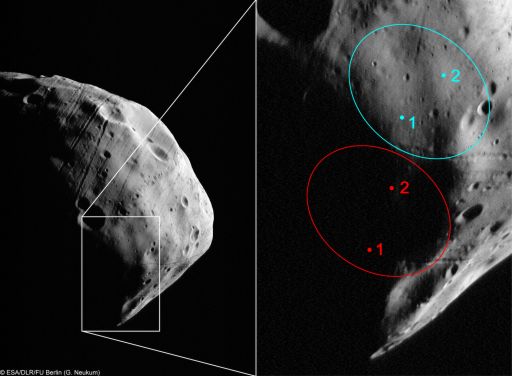 Based on Mars Express' imaging campaign of Phobos, the Phobos-Grunt mission has shifted their choice of landing sites from their original location, in the red ellipse, to the new locations, in the blue ellipse. The ellipse is located roughly from 7°-21°N and 214°-233°W.
Phil also posted to unmannedspaceflight.com this mosaic of two Viking 1 Orbiter images of Phobos, taken on February 21, 1977; he said that the Viking high-resolution images are still better than the available Mars Express image data (though of course the folks at DLR may now have higher-resolution stuff that just hasn't been released yet). 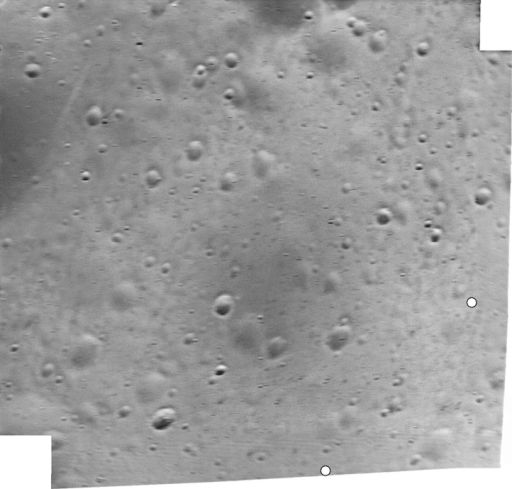 As of October 2008, the Russian space agency was considering two landing sites, marked by white dots on this map, for the Phobos-Grunt sample return mission. The sites are located near 7°-21°N and 214°-233°W on Phobos. This mosaic is made of two images captured on February 21, 1977 by Viking 1.