This time around DPS features three separate oral sessions on Titan, indicating just how much attention that moon is getting from the scientific community right now. From the first session, on Titan's lower atmosphere (including, apparently, its methanosphere), I'm just covering the two talks on Titan's lakes.

Roger Clark presented the results of some experimental, theoretical, and space-based data work that indicate that the VIMS (Visual and Infrared Mapping Spectrometer) instrument on Cassini is capable of detecting liquid ethane and methane sitting on the surface of Titan, even if the "lakes" are very shallow. Indeed, he reported detection of liquid methane and ethane in lots of places on Titan, generally the places that look dark in the 1- and 2-micron "windows" at which the cameras and VIMS are mapping Titan's surface. But, so far, the spectral data suggests that the liquid methane and ethane is a very, very thin layer, less than a millimeter thick. So these dark regions are more akin to mudflats or playas than lakes. In fact, he said, VIMS has detected nodeep lakes, but then they haven't yet had a chance to measure the north polar lakes. (Presumably they'll get some good chances to measure those lakes during the extended mission, as the Sun comes to the north pole of Titan with the coming spring.) 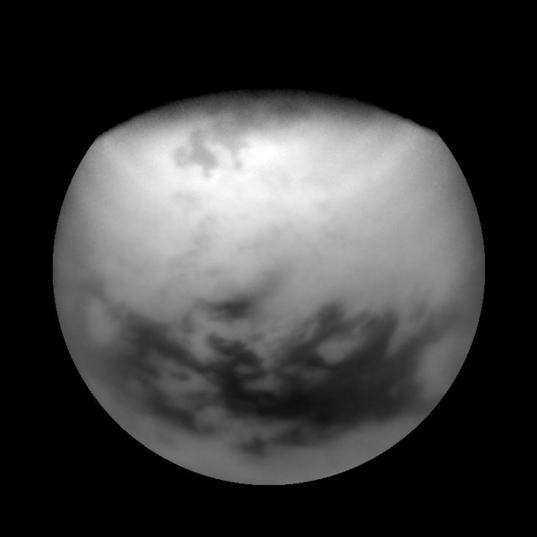 Special processing has revealed patterns in twilit near-polar terrain in htis view of Titan from 29 March 2007, as Cassini was approaching for the T27 flyby. To create this view, the imaging team ratioed two images taken through different filters. One of the two images was taken in a methane absorption band and mostly reveals details in the lower atmosphere and stratosphere of Titan. The other was taken in a "methane window," a wavelength at which methane gas is relatively transparent, so the surface was more visible, but still hazed by atmospheric effects. Processing the images by dividing one by the other cancels out the brightness variations due to the different angles at which the Sun illuminates the spherical Titan's surface. This processing reveals previously hidden dark patterns near Titan's north pole, which is nearing the end of winter. These areas are actually not receiving any direct sunlight at all; the lighting is only indirect, from sunlight scattered by Titan's thick atmosphere. The dark features may be lakes of liquid methane and ethane, which have recently been revealed in RADAR images of Titan's north polar region.

A commenter suggested the possibility that the lakes are deeper, but sunlight isn't penetrating because there's something floating in the lakes that is blocking the Sun. Another commenter suggested this could be particulate matter. Clark said that's a debate that's going on internally, within the VIMS team, but he asked: what floats on ethane? Ice doesn't. If the stuff sinks, then VIMS should be seeing photons of light that have traveled through longer paths of methane and ethane, and VIMS is just not seeing that. Clark also pointed out that although Earth lakes can look opaque at visible wavelengths because of small suspended particles, at the longer wavelengths at which VIMS is measuring Titan, Earth lakes look black -- the particles are too small to scatter longer-wavelength light. Later on in the session, Jason Barnes (who's also working with VIMS data) suggested that the light VIMS is seeing is actually light that was specularly reflected from lake surfaces, which would be utterly consistent with apparent path lengths of less than a millimeter. So it seems the jury is out on this lakes-are-less-than-a-millimeter-thick conclusion.

Zibi Turtle delivered a talk on lakes as seen by Cassini's main camera, the Imaging Science Subsystem (ISS). She showed that ISS is beginning to detect fields of lakes in the north, even though the Sun hasn't yet come to the north pole, because Titan's thick atmosphere, ordinarily considered pesky, is helpfully scattering sunlight beyond the terminator into Titan's nightside to illuminate those polar lakes. But the coolest thing in her talk was two side-by-side images of the south pole of Titan, one taken during the first, distant Titan flyby (known as T0) and one about a year later, on Rev 9. Both images showed clouds (in different places) and the foot-shaped dark feature now named Ontario Lacus. But on the Rev 9 image, there was a wholly new field of dark splotches that looked much like other lakes, suggestive of the possibility that a large storm had dumped lots of liquid on the surface in the intervening months. Zibi said there was evidence for some big outburst of cloud activity in the intervening time.

The one comment on Zibi's talk came from Roger Clark (the previous speaker), who said that the VIMS and ISS teams should really talk about this, and see if VIMS can see liquid in the same spot that ISS saw that new lake field. I was a bit surprised that they hadn't been talking already -- one would think that two optical remote sensing instruments on the same spacecraft that point in the same direction and often take data at the same time would be sharing data and interpretations with each other freely! I know that's just not how the Cassini science team operates, but still.