I'll be writing quite a bit about the annual meeting of the Division of Planetary Sciences (DPS) of the American Astronomical Society this week; see this post for an introduction. Now I'm going in to the talks from Sunday, where I faced a lot of conflicts, wanting to jump between rings, asteroids, and Titan talks. Watching the talks on the Web, I can catch up with all these different places in the solar system -- provided I can find the time to watch them all!

First up was a talk by Matt Hedman on the rings recently discovered in association with three small moons of Saturn that were themselves discovered in Cassini images: Pallene, Methone, and Anthe. 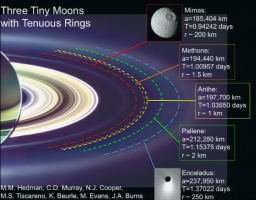 Methone, Anthe, and Pallene are very small moons that were discovered in Cassini images of the region between Mimas and Enceladus, in orbit around Saturn. Further investigation of these moons has yielded the discovery of rings associated with these moons -- ring arcs for Anthe and Methone, and a complete ring for Pallene.
"These are extremely tenuous rings. They are all at least an order of magnitude fainter than the G ring, which makes them really hard to look at. But the data we have are enough to show that there are differences in the detailed structure of these three rings, and that these differences have to do with the environment in which these rings live." Hedman said that the Pallene ring appears to be a complete ringlet -- it doesn't vary dramatically in brightness over 120 degrees of longitude. "This is in stark contrast to the ringlets associated with Methone and Anthe. Long-exposure, low phase images revealed ring arcs associated with Anthe and Methone, which do not extend more than 20 or 30 degrees away from the moons." 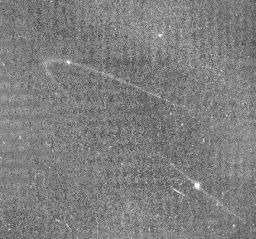 Methone and Anthe with their ring arcs

Arcs of material share an orbit with the tiny moons Anthe (top left) and Methone (bottom right). The arcs are confined by resonances with Mimas; the Methone arc only spans about 10 degrees of longitude, and the Anthe arc about 20 degrees of longitude.
"There's a very simple explanation," he said, though I doubt that most of you will agree that what's about to follow here is "simple." In short, the answer has to do with orbital resonances -- when you take the ratio of the orbital period of one of these tiny moons with Mimas, you get a rational number, a number that can be expressed as the ratio of two integers. Orbital resonances build many of the amazing structures within Saturn's rings. Here goes Hedman's explanation: "Unlike Pallene, both Anthe and Methone are in corotation eccentricity resonances with Mimas. These resonances are particularly good at confining material in longitude. If you're in a reference frame corotating with either Methone or Anthe, Mimas's orbital motion forms a closed loop. Because Mimas is in an eccentric orbit, it actually has an integer number of wiggles on it. Its gravity creates a series of evenly spaced pockets -- 15 in the case of Methone and 11 in the case of Anthe. The arcs are the right size to be fitting inside these pockets. The Methone arc is only about 10 degrees across...the Anthe arc is about 20 degrees across. The same process plays a role in the G ring and also in Neptune's Adams ring." Here's a diagram from his talk, a cartoon on the left depicting the resonance, and data on the right depicting the density of the ring arcs. 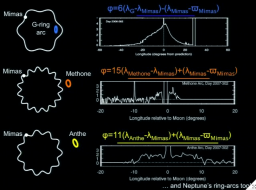 Resonances confine Methone and Anthe rings to 'pockets' within their orbits

An interesting question was whether there were arcs in others of those "pockets" associated with the Mimas corotation eccentricity resonance. Hedman said it was unlikely -- "We can't rule that out, but we haven't run across any 'orphan arcs.'