One of the first sessions at DPS was on results from the EPOXI mission, which is what they are calling the Deep Impact extended mission. There are two components to the extended mission: Deep Impact is on a long cruise toward a second cometary encounter, with Hartley 2 in 2010; but in the meantime, astronomers are using Deep Impact's defocused high-resolution imager to study known transiting exoplanets, and also to study Earth as though it were an exoplanet. What's a transiting exoplanet? It's a planet that orbits another star, which has been detected from Earth by the way it dims the light from its star as it crosses in front of the star on its orbit. In order for a planet to be detected this way, we have to be looking at the star system edge-on, so it's only possible for us to detect such exoplanets around the small fraction of stars whose planetary disks just happen to be oriented that way. 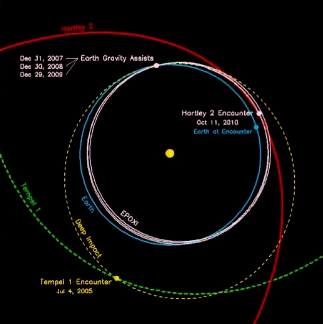 Orbital path of Deep Impact during the EPOXI mission

Deep Impact's extended mission is actually two: The EPOCh mission involves Extrasolar Planet Observation and Characterization and is performed while Deep Impact cruises, and the DIXI mission is the Deep Impact Extended Investigation, in which Deep Impact will fly by a second comet, Hartley 2, on October 11, 2010. Three Earth gravity assists are required to set up the Hartley 2 flyby, on December 31, 2007; December 30, 2008; and December 29, 2009.
Sarah Ballard showed some initial results of the EPOCh mission, which generally indicate that the mission is producing valuable data on transiting exoplanets. She explained why Deep Impact is so useful for such a study: "EPOCh takes advantage of the defocused point-spread function [of the high-resolution imager]. It spans about 4 arcseconds on the sky. That defocus is an advantage to us because we spread the light out on more pixels, thus enabling us to increase our exposure time and extend our duty cycle since we have very limited onboard memory. Each target was observed nearly continuously for several weeks at a time, stopping only for the spacecraft to downlink data back to Earth." They captured data from January to August of this year, observing seven different transiting exoplanets. They were looking to see if they could detect rings and moons, or if they could detect other planets in the same systems. She didn't have any such detections to report, but she did show a very nice-looking data set on a relatively small exoplanet, the only known transiting "hot Neptune" (a Neptune-sized planet in a tight orbit about its star), GJ 436. 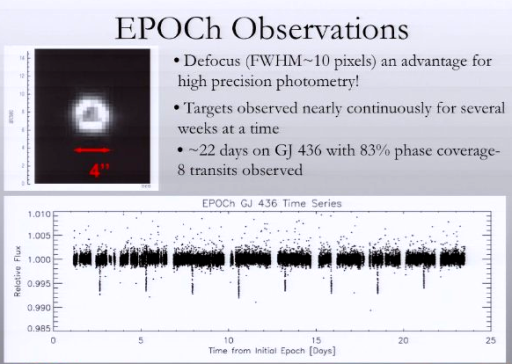 from Sarah Ballard's presentation to the 2008 DPS meeting

The upper left image shows what a stellar light source looks like to the defocused high-resolution camera on the Deep Impact spacecraft. This defocus was a problem for high-resolution imaging of the nucleus of comet Tempel 1, but it is actually helpful for Deep Impact's extended mission to study the light curves of transiting exoplanets. The defocus spreads the signal over many pixels, allowing much longer exposure times and increasing the sensitivity to the minute changes in stellar flux when a planet partially occults the star. The plot at the bottom shows 22 days of data from the hot Neptune GJ 436. Gaps in the data occur when Deep Impact had to turn to Earth to return data. 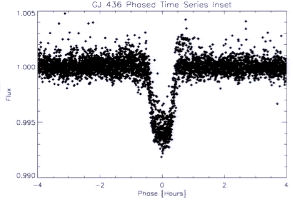 from Sarah Ballard's presentation to the 2008 DPS meeting

EPOCh data on the transit of GJ 436

Deep Impact's high-resolution imager is producing high-quality data on known transiting exoplanets.
Ballard then performed a statistical analysis indicating that if there were an Earth-sized planet in the same system as the hot Neptune, then they'd have about a 2/3 chance of detecting it and deducing its diameter to within 10% of the actual value. So stay tuned for Deep Impact to detect smaller planets in these systems. 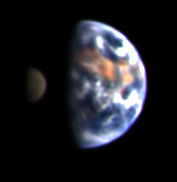 The Earth and Moon, from Deep Impact

This image of the Earth and Moon was taken by Deep Impact on May 29, 2008 from a distance of 49,367,340 kilometers (30,675,43 miles). The image was taken with three filters -- blue, green, and orange -- as part of a campaign to study Earth as though it were an extrasolar planet.
Timothy Livengood gave a presentation on Deep Impact's work studying Earth as though it were an extrasolar planet, which was mostly just to show that they have a good data set -- actually three separate sets of observations, conducted from one equinox to one solstice. One of the three included a transit of the Moon, which is pretty cool (and which I've written about before). His talk contained such humorous lines as "I just thought I'd let you know that the Earth is blue. You may not have known that." He showed data from Deep Impact's spectrometer, in which he could detect water (no surprise there) but also carbon dioxide, as well as some tiny features from methane, molecular oxygen, and ozone.

This pair of images represents the same viewpoint on Earth through two different sets of filters on the MESSENGER spacecraft. On the left, three filters in red, green, and blue wavelengths were combined to make an image that approximates what the human eye would see. The green mass at the center is the Amazon jungle of South America. The deserts of West Africa are just visible on the edge of the Earth's disk below and to the right of South America. The right-hand image is "pushed" into the near infrared; instead of red, green, and blue, it is composed of images taken through near-infrared, red, and green filters. Chlorophyll, the green pigment in plant leaves, is very strongly reflective at near infrared wavelengths, much more so than it is in red or green wavelengths, so the vegetated parts of Earth burst into bright red color.
One thing Livengood searched for in the Deep Impact data is the so-called "red edge." This refers to the shape of the spectrum of chlorophyll, the green pigment in photosynthetic plants. Chlorophyll is generally pretty dark, slighly more reflective in green wavelengths than blue and red (duh, that's why leaves look dark green). And that makes sense, because, after all, chlorophyll is what allows green plants to absorb solar energy to perform photosynthesis. But if you look at green plants in wavelengths of light slightly longer than the ones we can see, suddenly those leaves are brilliantly reflective. So one common way to study the photosynthetic productivity of a landscape from space is to look at Earth using a near-infrared filter; through such a filter, agricultural land, forests, and jungles glow brilliantly, while rocks, soil, water, and manmade surfaces are much darker. It's also common to make false-color images of Earth using three filters that are shifted slightly toward the infrared -- instead of using red, green, and blue-filter images to compose a true-color image, you use infrared, red, and green images to compose a false color image. In such images, vegetated areas appear bright red. The sudden jump in reflectivity of plants in the infrared is called the "red edge," and it's considered one way to detect Earth-like plant life from a long way away. Livengood demonstrated its presence in the Deep Impact data.

David Grinspoon presented the results of a similar experiment being performed by Venus Express. At Venus Express' distance from Earth, its highest-resolution VIRTIS instrument can't even resolve Earth -- it's always much smaller than one pixel -- which is actually a better analogue to future studies of extrasolar planets. If VIRTIS can't see Earth as a disk, it does get excellent data on Earth's spectrum, which is fun to study from a distance because of all of the different sources of variability: the spectrum changes as Earth rotates, bringing more continents or more oceans into view; it changes as weather patterns increase or decrease cloud cover and change their distribution; it changes with the seasons, as more or less ice covers the northern hemisphere (the southern hemisphere, having much less continent, shows much less seasonal ice cover variability); and so on. Again, the presentation didn't contain any real surprises; more than anything else it demonstrated that VIRTIS has captured a valuable, real-world data set that will be useful in developing models of what might be causing spectral variability on distant worlds that we will someday study with powerful telescopes. 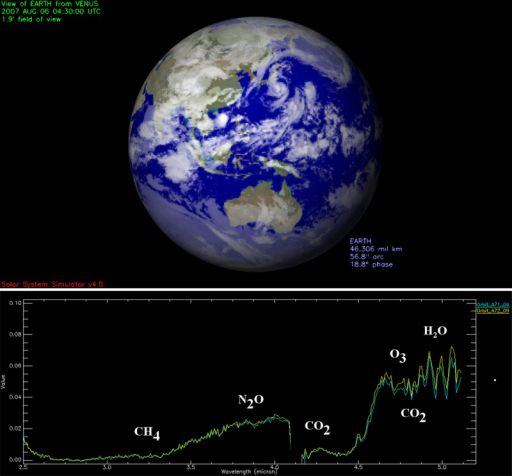 Periodically, Venus Express has turned its VIRTIS instrument to distant Earth. At Venus Express' distance from Earth, the planet is always much smaller than one pixel. However, VIRTIS is able to study the spectrum of the planet -- how it reflects light at different wavelengths -- and the wiggles and dips in the spectrum are diagnostic of the presence of several atmospheric gases. This data set is valuable for scientists who are searching for Earth-like planets around other stars.
There were a few more talks on actual exoplanets, but I think they were too technical for me to cover here. On to the next session...