MSL is still on target for a 2009 launch, no matter what anybody says

Last week an article in Aviation Week inspired rampant speculation about the fate of the next Mars rover mission, MSL, which is scheduled to launch in 2009. The article suggested that after a NASA Headquarters review being held today, Friday October 10, 2008, that the schedule could be so tight that they'd delay until 2011, or that budget overruns could be so great that Congress could choose to cancel the mission.

In response to this speculation, NASA held a press briefing today after the meetings, and the main message was pretty brief: The plan for MSL's development is to "continue unabated toward launch in 2009," said Doug McCuistion, director of the Mars Exploration Program. Despite ongoing budget and schedule "challenges," they seem to have reasonable confidence that they can meet the target launch date. So that's good news. 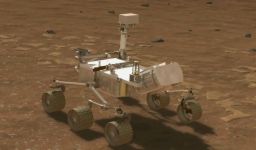 However, regardless of whether MSL sticks to its 2009 launch date or delays to 2011, it's going to cost more money. Originally budgeted at $1.6 billion, the cost has ballooned to $1.9 billion, and rumors suggest that JPL will need another $100 to $200 million on top of that to bring MSL to launch. A launch delay would cost another $300 million. However, the NASA officials would not go on record to state any of these numbers. McCuistion said, in response to repeated pressure from the members of the press, "We can't say where the money is going to come from yet because we haven't fully resolved that yet. We have to work this with the Office of Management and Budget and Capitol Hill before we finalize that." And, of course, until they officially say how much it's going to cost, they can't officially say where the money is going to come from: "Until we finalize that we can't discuss the sources."

Associate Administrator Ed Weiler did say this about where the money would come from: "We'll work within the Mars program first. If we can't find enough money there, the planetary program next. But before blindly canceling or delaying [missions], we look at other opportunities." For instance, he said, some missions don't spend all their money in a given year, carrying some over until next year; MSL could gobble that up. "There are certain accounting things you can do which can minimize the impact to missions. Not knowing the exact number [that MSL will need], I don't know if we can avoid hits to other missions, but that would be my first goal. As far as continuing the mission, Congress has always been very supportive. I can't tell you how many times Hubble ran into problems. If we made the easy decision to cancel, we'd've never launched Hubble, never launched Cassini, and a few others. MSL is a flagship mission in the Mars program, and as long as we think we have a good chance to make it we're going to do what we have to do."

Now, I don't believe for a minute that Weiler doesn't have good estimates of what they think it'll cost to solve all the problems MSL has now. I suppose, though, you still have to ask if there are yet more problems that may come down the pike. He doesn't want to have to go shopping for funds more than once if he can help it. There's a lot of speculation about where the funds could come from. If he's serious about sticking within the Mars program, there's really only one place to grab hundreds of millions of dollars from, and that's the recently approved MAVEN orbiter. Other people are speculating that they could go outside the Mars program and grab money from GRAIL or LADEE, lunar missions, or Juno, the next Jupiter mission. One reporter asked if they could choose to take money from the next outer planets flagship mission, and at least there was a reassuring answer to that one: although the next outer planets flagship will be, in the end, a two-billion-dollar mission, there's not very much money for it in fiscal year 2009, so that wouldn't be a place that could be robbed to fix the MSL budget. 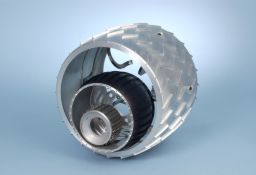 Comparison of three sets of rover wheels for Mars: Sojourner (smallest), the Mars Exploration Rovers (middle), and the Mars Science Laboratory (largest). Bigger wheels need much more robust motors.
What's the nature of the problems? As with all flagship missions, MSL is trying to do something that hasn't been done before -- put an instrument payload the size of Viking's on wheels -- so it's impossible to anticipate all the problems. And MSL has had its share of them, for sure. The biggest problem it has is its actuators -- the motors that move the joints in its arm, in the sample handling mechanism, and the wrist joints in the wheels. Originally, one of the ways they were going to make MSL robust to low temperatures were to use actuators that had a dry lubricant, which could operate at pretty much any temperature.

Unfortunately, the development of that dry lubricant failed, so they had to start over with the actuator design using a wet lubricant, the same as Spirit and Opportunity. (This happened a long time ago.) That means the actuators need to incorporate heaters, to prevent the lubricant from freezing at Mars temperatures, which also imposes a big hit to the power budget for the mission. And they couldn't just be scaled up from Spirit and Opportunity -- MSL is just so massive that the actuators have to be much more robust. They mentioned at today's briefing that the original design had titanium gears. The titanium gears proved unable to handle the stresses, so they had to switch to stainless steel. It's been one thing after another, and because actuators are important elements of so many parts of the rover, the fact that they haven't been delivered yet has been holding up the whole assembly process. They even said that JPL has sent staff to the company in New York, Aeroflex, to support the work there. Aeroflex is already working multiple shifts. They expressed hope that the actuators would be delivered at the end of November.

And that's just one of the problem elements. They had problems with parachute design that are now resolved. They found that the ablative material that was used on the Spirit and Opportunity heat shields would melt away in great gobs at the slightly higher speed with which MSL will be coming in, so they had to swtich to a different material -- the same ceramic tile stuff used on the Space Shuttle (and also, incidentally, used on the Stardust and Genesis return capsules). Some instrument development is late. They're still working out problems with the sample handling mechanism on the arm that will deliver samples to the chemistry labs. The new radar system for the landing cost more than they anticipated. None of these is unsolvable, but they all impose hits to both budget and schedule. 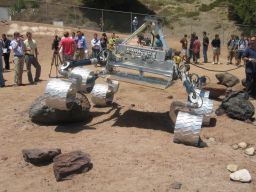 At the opening of the newly remodeled Mars Yard at the Jet Propulsion Laboratory on June 19, 2007, the "scarecrow" model of Mars Science Laboratory (so named because it "has no brain") is put through its paces. It was demonstrated to have no difficulty climbing meter-sized boulders, but to avoid risk the actual rover will not be driven over rocks taller than its wheels while on Mars.
Of course, it's frustrating that flagship missions almost always go waaayyyy over budget. [I had previously written here that they ALWAYS go over budget, but someone who worked on Cassini told me that mission, in fact, did not bust its budget -- though it was constantly under threat of cancellation, in a time when policymakers thought flagship missions were too expensive.] One of the reporters asked that question -- can't we do something to prevent these budget problems from always coming up? McCuistion gave a good answer to this one -- he said that yes, there is a way: that the thing to do is to spend more resources, outside of individual mission budgets, to develop the new enabling technologies that missions depend on. For instance, that dry lubricant problem is one that is important in space in general, and might have been handled through a separate technology development program, rather than being folded in to the MSL budget. That wouldn't necessarily have made the dry lubricant development work any better, but at least it wouldn't have been a big factor in imposing schedule delays (and therefore budget hits) on a whole big flagship mission.

In the end, the scientists and engineers I've talked with about MSL are pretty positive about its development right now. At the last landing site selection meeting in October of 2007, there seemed to be a lot of hand-wringing and worry going on. This time around, although there was still worry about money, there was a sense that a lot of the problems that had been nagging people last year had been solved. And the assembly is proceeding -- the cruise stage is nearly done, the descent stage nearly complete, the rover nearly assembled (except for those pesky actuators), two of the instruments (MARDI and DAN) are delivered and one of them, MARDI, already integrated; the mission is really taking shape, and now they're getting ready to stack everything together and start the environmental testing. There's a lot of work to do, but people seem to think it can be done.

The next one of these high-level Headquarters reviews happens in January. By then, the actuators should have been delivered, and also most of the instruments. Perhaps more importantly, the outcome of the presidential election will be known, and we may also then have a better handle on whether the current meltdown in world financial markets will cause the next president to make massive cuts in discretionary spending like NASA. Hopefully there will be no new problems before then, and MSL will get green-lighted for its launch next year, during a launch period that stretches from September 15 to October 15.