It seems that no one in Sudan was able to record the Whole-Earth views from Geostationary Satellites" web page. METEOSAT-8 was launched in August 28, 2002. In April of last year, it was relegated to backup status, replaced in active status by METEOSAT-9; both orbit Earth in a geostationary position near about 9°E, which puts all of Africa and Europe in view. As of May 13, 2008, EUMETSAT started using METEOSAT-8 in a "rapid scanning" mode, in which it scans the globe once every five minutes. So it was well positioned to spot the fiery atmospheric entry of 2008 TC3.

Okay, so here's the view of the fireball as seen through an infrared instrument on METEOSAT-8, which records the temperature of the surfaces it scans. The temperature scale on the right is in Kelvin; 273 Kelvin corresponds to 0 Celsius. Most of the land in this desert region of Earth is quite warm, with a few cold clouds to the southwest. And then there's the orange flare of the fireball. 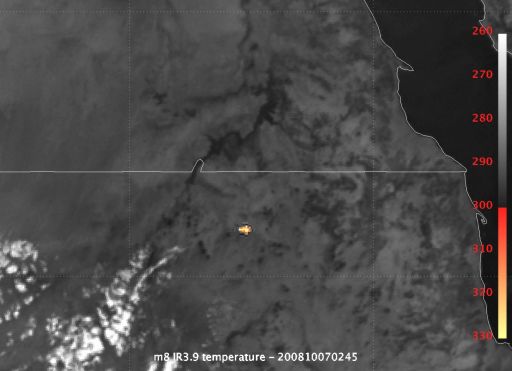 At 02:45:47 UTC on October 7, 2008, the first near-Earth asteroid to have been discovered before it hit Earth entered the atmosphere over northern Sudan. The flare of heat given off by the asteroid's passage through the atmosphere was recorded by the geostationary weather satellite METEOSAT-8.
But wait, there's more fun to be had with this data set. EUMETSAT released more data, taken in visible wavelengths. There's a flash there too. 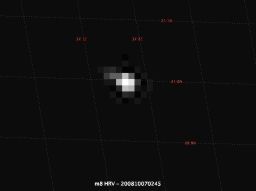 Image of the 2008 TC3 impact flash from METEOSAT-8

This view of the asteroid 2008 TC3 entering the atmosphere shows the visible-light flash associated with the entry.
But if you put the two images together, visible (flash) and infrared (heat), something funny happens. The two don't line up! The peak temperatures recorded by METEOSAT-8 are about 23 kilometers (14 miles) east-southeast of the brightest flash. 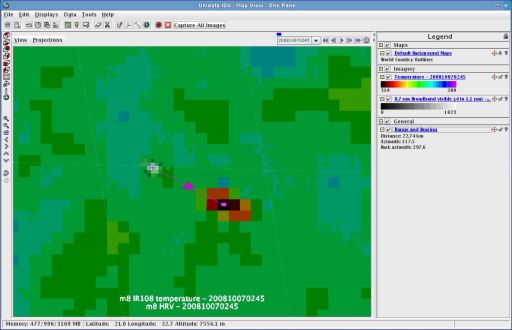 METEOSAT-8 recorded both the visible light flash and the peak temperatures of the fiery entry of asteroid 2008 TC3 into the atmosphere over northern Sudan. Oddly, the two signatures are offset: the peak temperatures are about 23 kilometers (14 miles) east-southeast of the impact flash.
The EUMETSAT page said that the entry velocity was 12.8 kilometers per second, so, without allowing for deceleration, that represents about 2 seconds' difference along the asteroid's path. (I don't know how much deceleration to allow for.) Two seconds isn't very much, but I'm at a loss to explain why the peak heating and peak flash would be so offset from each other within one satellite observation; maybe it just means that the two instruments weren't scanning quite simultaneously. I don't know enough about how the METEOSATs work to be sure.