Hot on the heels of MESSENGER's flyby of Mercury comes another big event, the closest-ever flyby of Enceladus by Cassini. This one is at an altitude of only 25 kilometers, or 16 miles. That's a low flyby! It's half the altitude of any previous Enceladus flyby. Moreover, it's 20 times closer than Cassini has ever got to any other target (it's done flybys of Hyperion, Dione, and Rhea at altitudes of about 500 kilometers), and 40 times closer than it's ever gotten to Titan (the atmosphere prevents Cassini from getting any closer than 950 kilometers from Titan). 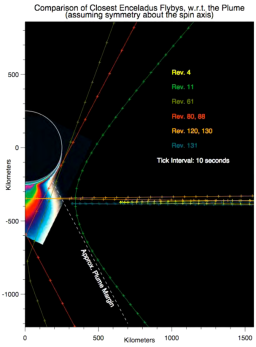 During the prime and extended missions, Cassini will have a total of eight very close flybys of Enceladus. This graph compares their geometry. The Rev 4, 120, 130, and 131 encounters happen when Cassini is on a near-equatorial orbit about Saturn; the other encounters happen with Cassini on more inclined orbits.

The press release associated with this flyby included some tantalizing new bits of information learned during the August flyby:

These two flybys might augment findings from the most recent Enceladus flyby, which hint at possible changes associated with the icy moon. Cassini's Aug. 11 encounter with Enceladus showed temperatures over one of the tiger-stripe fractures were lower than those measured in earlier flybys. The fracture, called Damascus Sulcus, was about 160 to 167 Kelvin (minus 171 to minus 159 degrees Fahrenheit), below the 180 Kelvin (minus 136 degrees Fahrenheit) reported from a flyby in March of this year.

"We don't know yet if this is due to a real cooling of this tiger stripe, or to the fact that we were looking much closer, at a relatively small area, and might have missed the warmest spot," said John Spencer, Cassini scientist on the composite infrared spectrometer.I expect to learn much more about the results from August -- and possibly even from tomorrow's encounter -- at the upcoming Division of Planetary Sciences meeting, which begins on Friday. Sadly, the Society couldn't afford to send me to the conference this time around, but I'm very happy to learn that many (all?) of the oral sessions will be streamed live over the Web. I plan to tune in -- if you can stomach the scientific discussion, you're welcome to also!

ere's a map of the best image mosaic we can expect from this encounter. It will be from the same point of view, with similar lighting, as the color mosaic from the last encounter, but will be slightly lower resolution, and will cover the whole visible disk instead of just part of it.