Over the last 24 hours it has been tiring but really fun to watch the drama of asteroid 2008 TC3. It has happened so quickly that it's necessary to convert all times to UTC in order to see how events have unfolded across the globe. Fortunately for my sanity, nearly all of the events are neatly collected on the Minor Planets Mailing List.

To briefly review: the night before last (my time), or at 06:38 UTC on October 6, astronomers at the University of Arizona discovered an object provisionally called 8TA9D69 that appeared to be on a collision course with Earth. Three other observatories reported sightings within the next few hours -- Sabino Canyon in Arizona and Siding Spring Observatory and a Royal Astronomical Society site, both in Australia. Together these four observers provided enough data on the object so that a Minor Planet Electronic Circular was issued at 14:59 UTC the same day, giving 8TA9D69 the more formal name 2008 TC3, and advising the astronomical community that "The nominal orbit given above has 2008 TC3 coming to within one earth radius around Oct. 7.1. The absolute magnitude indicates that the object will not survive passage through the atmosphere. Steve Chesley (JPL) reports that atmospheric entry will occur on 2008 Oct 07 0246 UTC over northern Sudan."

Eric Allen observed asteroid 2008 TC3 as it approached its impact on Earth on October 7, 2008 at 01:32 and 01:42 UTC. The fast motion of TC3 makes it stretch out as a dashed line in these two photos, which is made of several 10-second exposures, separated by 10 seconds each. The two images were taken only 10 minutes apart. In the intervening 10 minutes, under the influence of Earth's gravity, TC3 had noticeably sped up and shifted direction as it approached its impact at 02:46 UTC.
The object wouldn't be more than a big meteor, but even so, it represented the first time ever that an object had been observed before it was to hit Earth, and, clearly, astronomers around the world scrambled to their telescopes to observe it before it was to pass into Earth's shadow (and, therefore, invisibility) just before 01:50 UTC. The observations were partly for the thrill -- seeing an object in its last hours, before it met a fiery fate in Earth's atmosphere -- but they also had a more important purpose: to refine the orbit of the object, which would, in turn, improve the predictions of where it would hit. Over the next 11 hours, fully 24 Minor Planet Electronic Circulars were issued with further observations, pinning down 2008 TC3's final path with high precision. One terrific set of images, from Eric Allen, is shown at right. Like many of the amateur astronomers participating in the impromptu 2008 TC3 observing campaign, Allen's work has been aided by Planetary Society members, through the Gene Shoemaker Near Earth Object Grant Program.

With the object so close to Earth, the parallax of different observers on different parts of the globe allowed much greater precision than is usual, given the short observing arc. The initial impact prediction was confirmed by JPL scientist Paul Chodas at 01:45 UTC: "We estimate that this object will enter the Earth's atmosphere at around 2:45:28 UTC and reach maximum deceleration around 2:45:54 UTC at an altitude of about 14 km. These times are uncertain by +/- 15 seconds or so."

After positional information, the next challenge was to obtain spectral data -- information on the color of the object, which would help to classify it and determine its origin. The first I heard of such data being captured successfully was from this item on the MPML by Alan Fitzsimmons and coworkers at Armagh Observatory: "We obtained optical spectra of 2008 TC3 using the 4.2m William Herschel Telescope and ISIS spectrograph on Oct 6.93-6.94UT. The spectra cover the range 546-995nm at a resolution of 4nm. Initial analysis of the spectra via comparison with the solar analogue 16CygB reveals a featureless reflectance spectrum with no indication of the silicate absorption feature longward of 800nm." Presumably there were other observers who were able to obtain spectral data, though not as many as were gathering positional information.

Time quickly ran out to observe the asteroid, however. Astronomers in Spain recorded 2008 TC3's entry into Earth's shadow, hiding it from view for its final hour of descent. The image is below: 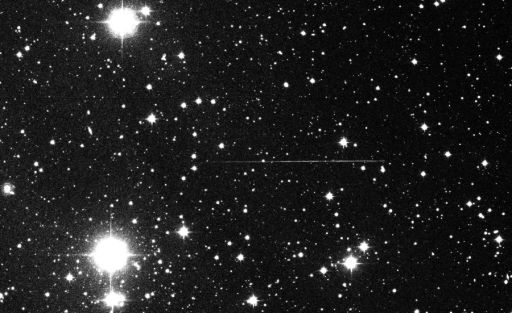 2008 TC3 disappears into Earth's shadow, on its way to impact

Traveling from right to left in this image, asteroid 2008 TC3 entered first the umbra (at 1:47:30 UTC) and then the penumbra (at 1:49:50) of Earth, disappearing into shadow for the final hour of its approach to burning up in the atmosphere over Sudan. The view is a six-minute exposure tracked at sidereal rate (so stars stay fixed). Exposure start time was October 7, 2008, at 01:45:23 UTC. The view is half a degree wide, comparable to the size of the full Moon. At the start of the exposure 2008 TC3 was at a distance of 29,600 kilometers, approaching at a speed of 7.61 kilometers per second. The periodic light variation along the early part of the trail indicates a fast rotation of the intruder around its spin axis.
The atmospheric entry occurred over an extremely remote location on Earth, just 20 hours after it was first discovered. As yet there are no confirmed images of the fireball -- it's possible there may never be any. There is one possible sighting: one resourceful enthusiast, Jacob Kuiper, the General Aviation meteorologist at the National Weather Service in the Netherlands, called an official of the Air-France-KLM airline at the Amsterdam airport to inform him "about the possibility that crews of their airliners in the vicinity of impact would have a chance to see a fireball. And it was a success! I have received confirmation that a KLM airliner, roughly 750 nautical miles southwest of the predicted atmospheric impact position, has observed a short flash just before the expected impact time 0246 UTC. Because of the distance it was not a very large phenomenon, but still a confirmation that some bright meteor has been seen in the predicted direction." (This via spaceweather.com.)

And there's more than one way to detect an asteroid impact. Even in relatively unpopulated areas, there are seismological stations scattered around the world, using infrasound to record seismic events. One such station seems to have detected a 1 to 2-kiloton blast associated with the impact. This is according to Peter Brown, of the University of Western Ontario [hey, that's the same university that's home to asteroid mapping genius Phil Stooke]. Brown said:

A very preliminary examination of several infrasound stations proximal to the predicted impact point for the NEO 2008 TC3 has yielded one definite airwave detection from the impact. The airwave was detected at the Kenyian Infrasonic Array, (IMS station IS32), beginning near 05:10 UT on Oct 7, 2008 and lasting for several minutes. The signal correlation was highest at very low frequencies -- the dominant period of the waveform was 5-6 seconds. The backazimuth of the signal over the entire 7 element array is shown in the attached map -- it clearly points to within a few degrees of the expected arrival direction. Moreover, assuming a stratospheric mean signal speed of 0 28 km/s, the arrival time corresponds to an origin time near 02:43 UT, which is consistent with the expected impact time near 02:45:40 UT given expected variations in stratospheric arrival speeds. The dominant period of 5-6 seconds corresponds to an estimated energy (using the AFTAC period at maximum amplitude relationship from ReVelle, 1997) of 1.1 -- 2.1 kilotons of TNT. The five other closest infrasound stations were briefly examined for obvious signals and showed none -- more detailed signal processing of these additional data are ongoing in the search for additional signals. 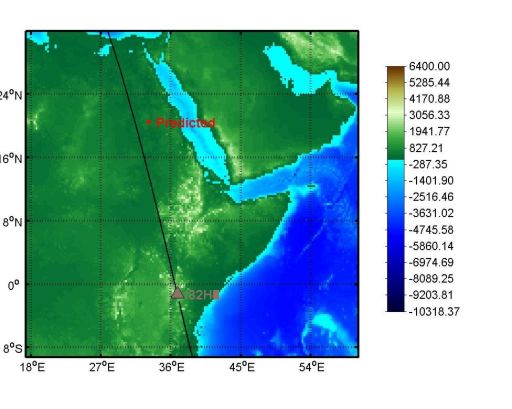 Detection of the 2008 TC3 impact by infrasound

An infrasound station (intended for the detection of seismic events) in Kenya recorded the blast associated with the atmospheric entry of asteroid 2008 TC3 over Sudan.
All in all, I think the episode of 2008 TC3 has proven that the world's astronomical community, at least, is prepared to respond when an object on a collision course is detected. Within just a few hours of its discovery, the digitally connected world knew exactly where and when the object would hit, and also that it posed no threat. It was a wonderful simulation of the first part of the call to arms when a truly threatening object is detected.

But of course we now have to ask ourselves: what would have happened if the object was much bigger than 2 meters in diameter? Reassuringly, the first thing that would have happened is that the detection most likely would have happened much earlier. The bigger and more hazardous an object is, the brighter it is, and the sooner we will detect it. We will likely have way more than 20 hours' warning of an incoming dangerous object. Still, though, the warning time for a tens-of-meter-diameter object could only be measured in days. If we'd had three days' warning of a dangerous impactor heading for Sudan, what could the world have done? The remote location of the impact would have been fortunate for humanity in general, but disastrous for the few people who lived out in that remoteness. Could the developed world have done anything to prevent yet another humanitarian disaster from befalling the Sudanese?The Planetary Society is seeking answers to these questions. We have joined the Association of Space Explorers and the B612 Foundation in their efforts to develop an international framework for planetary defense, and we plan to hold both an invited workshop and a public meeting on these issues in the summer of 2009, as a part of the International Year of Astronomy. When the time is right, we will push for action on this issue from the United Nations' Committee on the Peaceful Uses of Outer Space. A final plea to wrap up this story: if you'd like to support these efforts to protect our planet from hazards from space, please vote with your wallet by sending a donation our way. Any amount is helpful!