Without question, this is the money shot from MESSENGER's second flyby. I think this image provides an answer to all of those people who suggested that seeing Mercury again -- even if it was from a new perspective -- might be dull because it would be more of the same. To be sure, this shot of Mercury contains many of the same elements that were visible in the views from MESSENGER's first flyby -- but what a difference a few fresh impact craters make! 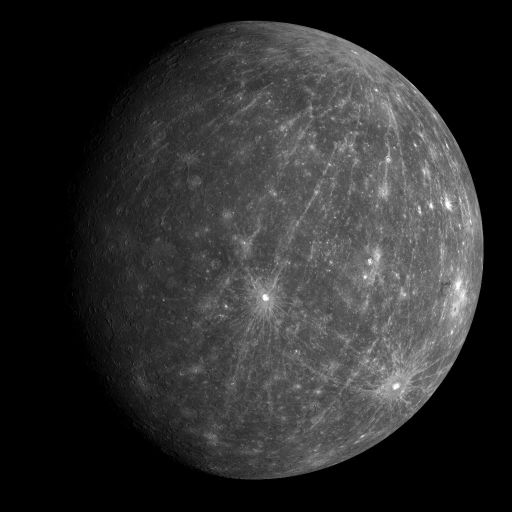 As MESSENGER sped away from its October 6, 2008 encounter with Mercury, it captured this view of a face of the planet mostly previously unseen by spacecraft. A recent impact near the north pole has left its mark on Mercury in the form of a spectacular set of rays stretching right around nearly to the south pole. Two other recent impacts have also left large ray systems. The ray crater nearest the center of this image was previously seen on the edge of the Mariner 10 images and is named Kuiper. All the terrain to the east (right) of Kuiper is new.
The striped or striated appearance of the planet from this point of view is mostly due to a set of rays from a single spectacular impact crater located near Mercury's north pole, near the upper right of the globe in this image. When that big boom happened, streamers of Mercury's crust sprayed in all directions from the crater; under the influence of gravity, they slammed back to ground, forming the bright rays. The rays traveled so far that they reached right around nearly to the opposite side of the planet, actually converging toward a point antipodal to (that is, on the point directly opposite the center of the globe from) the original impact crater. It's absolutely terrific. Every one of the craters that you can see in this image of Mercury would have produced such a ray system originally -- the rays from the larger craters would have been even more dramatic, if you can believe it -- but space weathering has erased all those rays except for the ones from the most recent impacts, like Kuiper just below center.

Along with that photo they also released a nice view of the inbound crescent, and three detailed shots. Two of those detailed shots -- this one and this one -- show terrain near the equator on the outbound part of the flyby, and are notable mostly because they represent just a small part of a data set that included multispectral imaging AND high-resolution imaging AND spectroscopy AND altimetry, making that area probably the best-studied part of Mercury to date (or it will be, as soon as the science team has time to wrap their heads around that data set).

My favorite of the detailed views released to date was this one, shot across the limb as MESSENGER came in for the flyby: 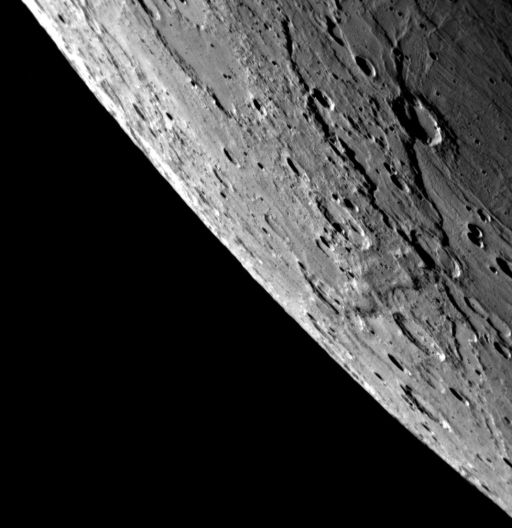 MESSENGER captured this view of previously unseen territory on Mercury as it approached for its second flyby on October 6, 2008.
It's a dramatic view, highly foreshortened, in which small craters form deep holes in the ground, but large craters are very flat-floored, indicating that they've probably been filled in by volcanic eruptions in the past. Near the right-hand edge of the image, there is a marvelous system of scarps that cuts across several craters. And then, to the right of that, is the oddest think about this image: there's a weird striated texture to the terrain there, which is on the otherwise flat floor of a large, flooded impact basin. Maybe that's part of a crater ray system that's centered off the image to the right, but it has more topography than I'd expect for a crater ray system. I'm not sure what could have created that texture.

To help in piecing together where the image releases go, here's a context map I've put together showing the locations of recent image releases, as well as names of craters previously seen by Mariner 10. There are other named craters in between the ones with white letters and Kuiper, but they are hard to spot on the MESSENGER image and I wasn't confident enough in their locations to mark them on the map. 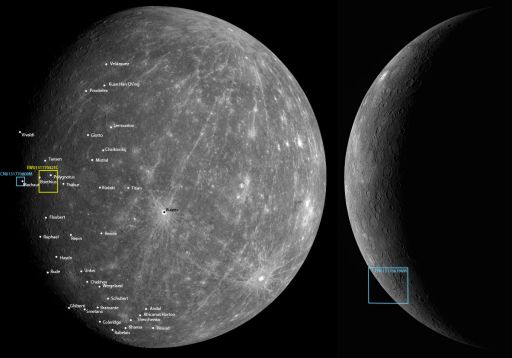 Locations of MESSENGER Mercury Flyby 2 detail images as of October 7, 2008