The MESSENGER mission issued a press advisory this morning stating that, following its closest approach to Mercury at 08:40 UTC today, "Initial indications from the radio signals indicate that the spacecraft continues to operate nominally." There are no images available from the flyby yet; MESSENGER is still too busy gathering data to be able to talk with Earth yet. Checking the flyby science timeline, I find that the first playback of the highest-priority images wraps up at 06:30 UTC tomorrow. So the MESSENGER team should have some great new pictures to ogle and then release early tomorrow morning, Eastern time.

Until then, this is the best view we have of Mercury from this flyby. Ordinarily I'd post the image and then wander around it, speculating about what the various bright and dark blotches might mean. But I was happy to see that the MESSENGER team indulged in a little preliminary description and speculation themselves. Scientists often don't like to do that in a public forum, because there's a chance they'll be wrong about their initial guesses. But it seems harmless in this circumstance. So I'll post what the real live science team had to say about this picture. 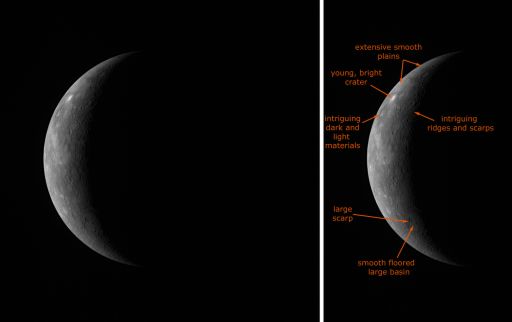 First view of a new slice of Mercury

"The newly imaged terrain shows a wide range of geologic features. Near the northern limb [edge of the disk] of the planet, extensive smooth plains, possibly volcanic in origin, are identified. A nearby crater is the brightest feature visible in the image, suggesting a relatively young age. In the southern region, a large basin is seen with a smooth floor, likely also a product of volcanism. A large scarp that appears to cut through this basin may have formed as Mercury cooled and contracted.

"Many more features in this image have also captured the MESSENGER team's interest. Hints of ridges and scarps are barely discernable near the terminator [day-night boundary], and a crater near the limb suggests the presence of intriguing dark and light materials. With the comparatively low resolution of this image, any insight that can be gained into these areas is limited. But that limitation will not last long. After all, this is just an optical navigation image. Early this morning, MESSENGER acquired a [narrow-angle camera] mosaic of this same area with a resolution ten times higher!