MESSENGER gets closer to Mercury

Here's the fifth of those optical navigation shots that MESSENGER's taking as it approaches Mercury (click to enlarge to see the details): 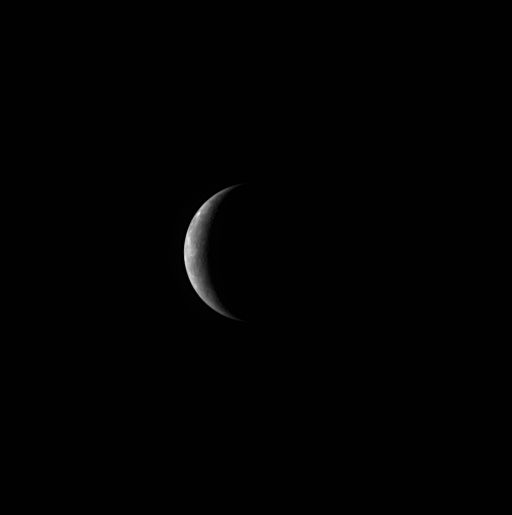 This is the fifth of MESSENGER's optical navigation images of Mercury during its approach to its second flyby, taken on October 5, 2008, from a distance of 690,000 kilometers.
Unlike the first one I posted, there's quite a lot of detail visible in this one -- and again, this is all territory previously unseen by spacecraft. There's a nice big basin near the bottom of the crescent, similar to (and maybe a little bigger than) the Tolstoj one that was visible below Caloris in the outbound images from the first flyby. That one may have a darkish ring like Tolstoj too, but it's a bit hard to tell with the low detail of these distant shots. There's also some very bright features closer to the equator. Clearly, there's diversity in the landscape of this unmapped terrain. One more day and all that detail will be revealed! Well, a little more than that -- we have to wait nearly a day after the flyby for the images to start coming down. 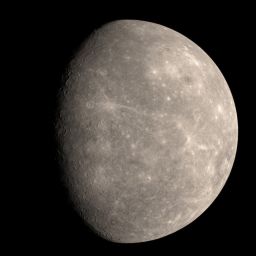 This approximately true color view of Mercury was created by manipulation of the color space of the false-color official release from the MESSENGER team. The image was captured as MESSENGER departed its first flyby of Mercury on January 14, 2008. Caloris is a large bright basin in the top half of the image. Tolstoj is a dark-ringed impact structure, highly foreshortened at about 4:00 on the limb.