Long drives at last for Opportunity (or, getting your kicks on sol 1,666)

It's been way, way, way too long since the view from either rover's cameras has changed very much. So I hope you'll join me in a shout of "woo hoo!" or perhaps "yippee!" as I show you the latest view from Opportunity, from sol 1,666, as automatically composed in Mike Howard's Midnight Mars Browser software: 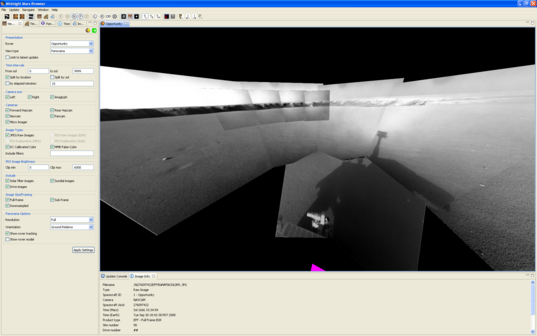 As of sol 1,666, Opportunity had driven about 250 meters south of Duck Bay, the point at which it had entered Victoria crater an Earth year before. In this panorama it is looking across Cape Victory toward the crater. Most of the panorama is built of larger Navcam frames; the smaller images in the center of the panorama are higher-resolution images taken with the Pancam, and indicate Opportunity's next likely drive direction.

If you aren't among the people who have given over 25 GB of your hard drive to Midnight Mars Browser, Mike has helpfully exported this view as a Quicktime VR panorama, on which you can click and drag your mouse to spin the view around.

That hole in the ground is, of course, Victoria crater, Opportunity's neighborhood for the last Mars year or so. We're about to leave it in the rear-view mirror, but not before taking one last parting view. You don't even need to read A. J. S. Rayl's latest rover update (although you should go read that!) to figure out what's going to happen next; the only clues you need are in the panorama above. At the end of any long drive, the rovers usually grab at least a partial panorama with their Navigation Cameras (Navcams) to get a good fix on where they are. The Navcams are black-and-white only and are the lower-resolution of the rovers' mast-mounted cameras; you don't need very many Navcam images to make a complete 360-degree view around the rover. In the panorama above, you can see parts of five Navcam frames tiling Opportunity's horizon, and a further two that fill in the space immediately in front of the rover's wheels. But on top of that, you see four much smaller tiles. Those are Pancam frames. Pancam has roughly three times higher resolution than Navcam; the tradeoff is that it takes more Pancam shots to cover the world around Opportunity. So at the end of a drive, they take Pancam shots only in the direction that they plan to drive next, giving the rover drivers a detailed view of the terrain at a distance from the rover. On any Midnight Mars Browser panorama, the location of the Pancam shots tells you where the rover drivers are aiming Opportunity next. In this case, they're aimed at the crater rim -- so they're planning on driving Opportunity toward the rim, presumably to get a good look back at the crater.

Here's a tidbit of the route map maintained by Eduardo Tesheiner, with the basic outlines of Opportunity's near-term future path (as articulated by Steve Squyres) marked in blue. 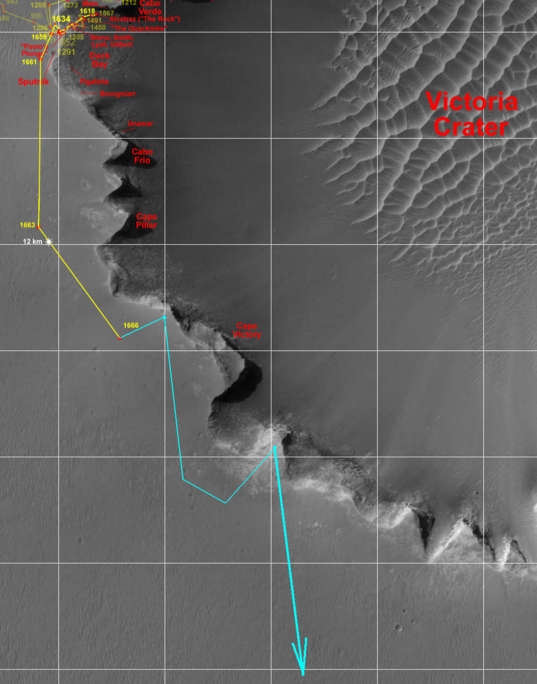 A close-up view of the path Opportunity's first two long drives after exiting Victoria crater, and the plans outlined by Steve Squyres for the upcoming sols of driving.

Here's a few snapshots from the recent spate of driving. 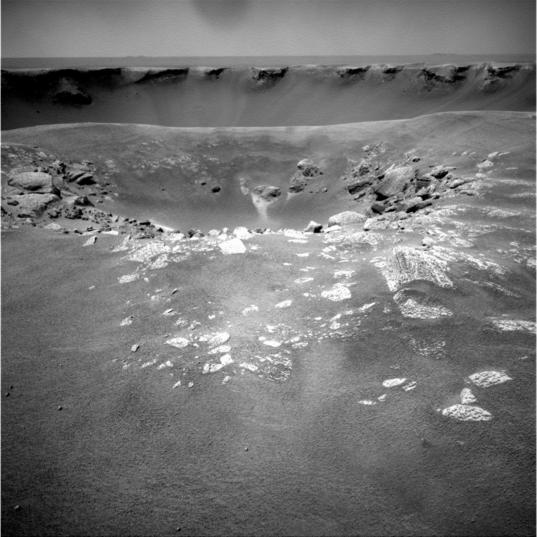 At the end of a drive on sol 1,661, Opportunity looked to the side over a small but unusually deep hole in the ground, named Sputnik, to Victoria.

Here's a view to the rear taken at the same time. 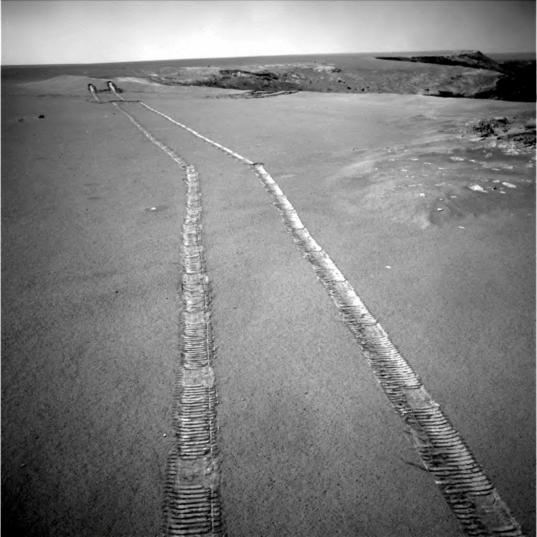 At the end of a drive on sol 1,661, Opportunity looked back to the location where it had driven into Victoria crater and out again a year later (visible as dark tracks cutting the crater rim at center in the background). Just after exiting the crater, Opportunity tried to climb a drift of dust called Bagnold, but retreated after encountering wheel slippage (bright tracks in drift at left background).

After that they quickly left Duck Bay behind. Here's the rear view after a long, long drive on sol 1,663. On the road again! 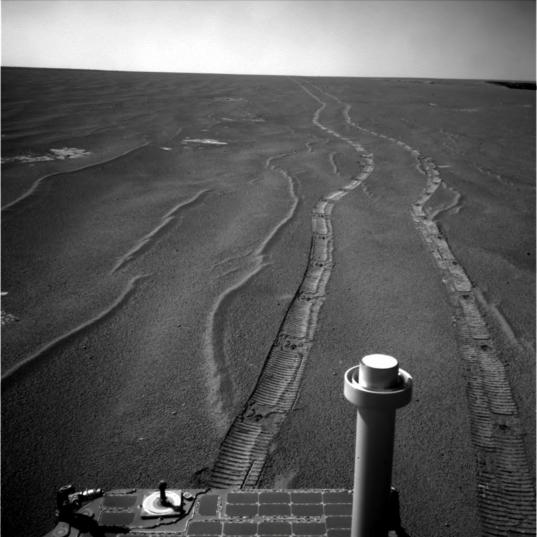 After a drive of more than 150 meters on sol 1,663, Opportunity took a day of rest to look around and contemplate its tracks on the rippled sand of Meridiani Planum.

A. J. S. Rayl's latest rover update will fill you in on the upcoming plans for Opportunity. There's a great quote from principal investigator Steve Squyres in there: "We could have decided to do just go noodling around out on the plains, sniffing at cobbles until the wheels fall off. But you know, that just didn't feel to me like the right thing to do. These are the Mars Exploration Rovers. We decided that it would be good to set a really challenging, maybe impossible goal for ourselves, then take on the challenge of trying to meet it." I would bet you a case of beer that there are scientists on the team who secretly (and maybe not so secretly) would prefer to "noodle around" checking out the various piles of cobbles. But that's not Steve's way, and I'm glad. Steve's taking a risk here -- the risk being that what Opportunity will find along its journey might not be as scientifically exciting as what it may have found with noodling. But the journey will be so much more fun. The view will change from drive to drive, and you never know what'll be over the next sand ripple -- I'm confident that both scenic and scientific surprises await, no matter how good the reconnaissance is from Mars Reconnaissance Orbiter. I, for one, will be following the mission a lot more closely now than I have been.