Opportunity's got a long road ahead

Mars Exploration Rover principal investigator Steve Squyres announced on National Public Radio's Science Friday show the next goal for Opportunity, and it's a long, long, long way away: a huge crater about 12 kilometers southeast of its current location, which the team is referring to internally as "Endeavour." That seems like a crazy distance for an old rover to drive. It's certainly been proposed as an eventual goal among rover watchers before (just do a Google search on unmannedspaceflight.com for the word "Ithaca," the name given to that crater by one particularly sanguine proponent of such a long drive, Rui Borges, a.k.a. Ustrax.) But it seemed a nutty idea to send a four-year-old rover on such a long trip.

I guess it's not so nutty though. I haven't had a chance to listen to the show yet, but Squyres apparently said that they've done the easy places so it's time to try to do something hard. (Ha, I wonder what the rover drivers think of Opportunity's 'easy' time so far.) And he predicts it could take a couple more years to make the trip. Even though Opportunity is aging, though, it may actually now have an easier time attempting such a long drive than it did in the past. For one thing, Opportunity is much smarter than it used to be. There have been many upgrades to its "brain," especially to its autonomous navigational abilities, based upon its long experience on Mars. For another thing, when Opportunity arrived, it had to navigate on its own, but now Mars Reconnaissance Orbiter's HiRISE camera is in the sky, ready and able to deliver the equivalent of aerial photos to the Opportunity science team, allowing the team to map out every traverse long in advance. So they can pick a good path from afar, and then Opportunity would only have to deal with the small-scale obstacles, which it's now smart enough to avoid on its own. They could easily go 100 meters a day, on good days. At that rate, it'd be four months to "Endeavour." Of course, it won't get that speed all the time. Still, let's say Opportunity only averages half that, and throw in the conservative engineers' rule of thumb that you lose one in every three days to an anomaly, and it'll still take Opportunity just a year to get there. That's about as long as the upcoming Martian spring and summer -- good times for a road trip!

The proposed drive is so long that I am having a terrible time coming up with a perfect context image, but the Mars Reconnaissance Orbiter Context Camera (CTX) does a very good job with one well-framed photo. It doesn't show you all of "Endeavour," which is the big crater cut off at the lower right corner, but it does encompass all of Opportunity's traverse to date, and all of the land it'll have to pass through to get to the rim of that big crater. Apparently HiRISE principal investigator Alfred McEwen was also on Science Friday, and said that on October 10 they'd be nabbing a new HiRISE photo covering the landscape in between Victoria and "Endeavour." 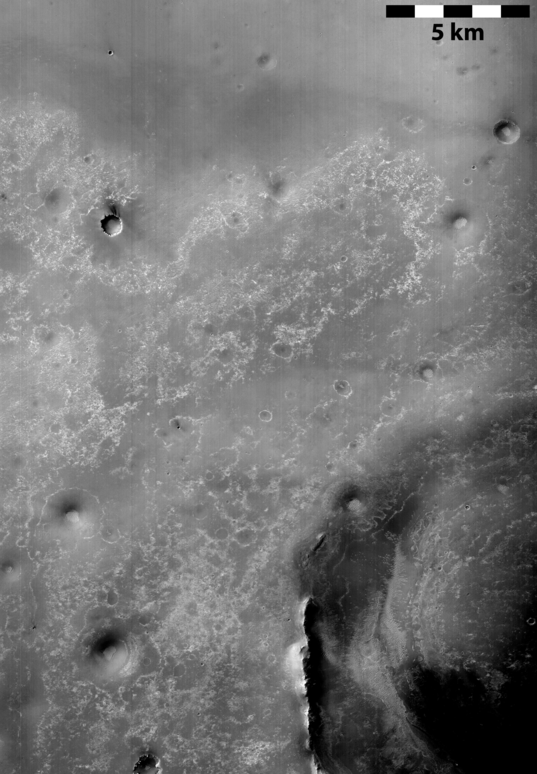 A base map for Opportunity's future travels

Opportunity's travels have taken it a long way, from its landing in Eagle crater (almost invisible in this image) to its next stop, Endurance (a tiny dark hole near the upper left corner), and on to Victoria, a fresh, sharp-edged crater that is visible above center, to the left of this image, with a prominent dark streaks fanning out of its northern rim. To date, the wheels have rolled through slightly more than 10 kilometers of odometry (though it's not been quite that long as the Martian crow flies). Now, Opportunity will be heading off to the southeast, on a journey taking it 12 kilometers across Meridiani Planum to a huge crater, cut off at the lower right corner of this image. This image was taken by the Context Camera on Mars Reconnaissance Orbiter.

As usual I'm thankful to ASU for hosting their Mars Global Data map interface, which helped me find this one quickly. I even located a couple of Viking photos covering the area, but none of them was quite good enough to show Victoria, unfortunately. There seems to be a really nice HRSC image available (preview here)...someone ought to download the data and make a pretty color version...

...and just to blow your mind, here's a gem for those of you old enough to remember Mariner 6 and 7's Mars flybys. 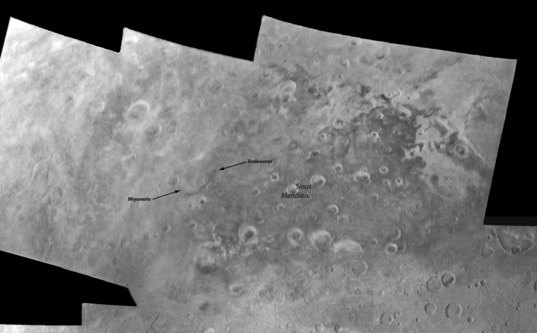