MAVEN will be the second Mars Scout mission

Congratulations are due to Bruce Jakosky and the University of Colorado at Boulder and its Laboratory for Atmospheric and Space Physics: NASA announced today that the second in the low-cost Mars Scout mission series will be MAVEN. MAVEN stands for Mars Atmosphere and Volatile Evolution; it's a mission designed to study Mars' upper atmosphere and its interactions with the Sun. (This is more or less what Japan's Nozomi would have studied, if it had succeeded.) One key scientific question will be how quickly Mars' atmosphere is currently escaping into space -- the current loss rate is an important variable that controls models of what Mars' climate was in the past. Here's the newly launched MAVEN mission website, if you want to find out more.

MAVEN will cost $485 million and will launch in 2013; it'll be the next Mars mission after MSL, currently slated for 2009. Originally, the next Scout was to have been launched in 2011, but it was delayed last December. So now there is no Mars launch planned for the 2011 launch window -- the first Mars launch opportunity without a mission since 1994, the gap between the failed Mars Observer and Mars Global Surveyor.

The instruments include: a "remote sensing package...that will determine global characteristics of the upper atmosphere" -- it's not clear if that includes a camera that will produce images of much interest to the public, but I think that probably it will not. There is a six-sensor fields and particles payload to study the solar wind, upper atmosphere, and ionosphere; and a neutral gas and ion mass spectrometer, which will scoop up atmospheric gases and ions and measure their composition and isotopic ratios.

It's exciting to know what the next mission is going to be. But it's hard to imagine that this one will be too exciting to the public. There's a gap in Mars excitement ahead of us now. 2011 -- no Mars launch. (Unless, of course, MSL or Phobos-Grunt gets delayed until then; there are constant worries of that, but so far, both missions are sticking to 2009 launch dates). 2013 -- an important but not sexy Mars launch. Here's hoping that Mars Reconnaissance Orbiter and MSL last a long, long time and can continue producing good material for Mars public relations through that time. And let's also fervently hope that ESA's ExoMars stays on track for its 2013 launch. 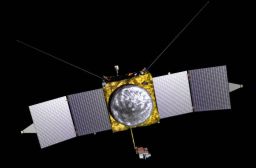