A recording of today's Ustream chat is now available; you can also read the chat log here.

One of the things I discussed in my presentation is the fact that Itokawa stands out from the other asteroids because it looks so different -- other asteroids look like reasonably solid bodies, with impact craters, while Itokawa looks like a collection of gravel. But I think that part of the contrast may result from the vastly different scales at which we look at Itokawa and other asteroids, since Itokawa is so much smaller. There's only one asteroid that has been seen at a resolution comparable to Hayabusa's views of Itokawa, and that's Eros -- NEAR landed on Eros and took pictures all the way down. Below are two photos, one of Itokawa and one of Eros, at a similar scale of about 2.5 centimeters (one inch) per pixel. The two still look different, but not as different as they look when you are considering the whole asteroids. 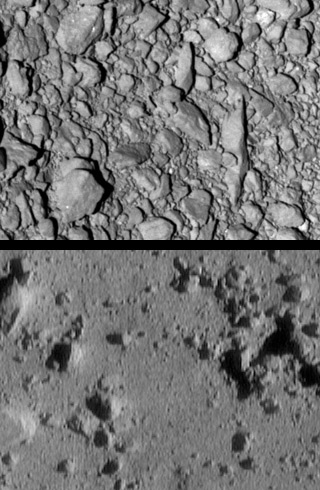 Itokawa looks very different from other asteroids that have been visited by spacecraft because of its gravel-covered surface and lack of craters. However, its different appearance may be partially to do with the different scales at which we typically look at different asteroids. Here are two pictures taken at a similar scale -- about 2.4 centimeters per pixel -- of Itokawa (top) and Eros (bottom). Both show gravelly surfaces. (Itokawa has other areas that are smoother, with finer gravel, like Eros does.) Although the two still look different, they are not as different as a direct comparison between whole-asteroid images would suggest.
For comparison, here's a look at all of Itokawa... 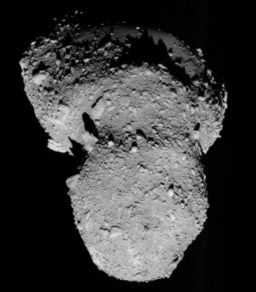 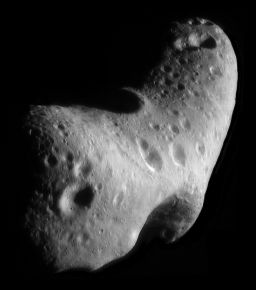