I'm sorry I skipped this roundup last week -- both for you readers and for me; now I have two weeks' worth of events to catch up on! Fortunately this appears to be a quiet week for space exploration.

The big news, last week, of course, was Rosetta's flyby of Steins; I posted images and my updated asteroid montage on Saturday. I do have notes from the press briefing to share; if I'm industrious I'll get to that today, if not, then tomorrow. (It'll probably be tomorrow.) There's nothing further on Rosetta's calendar until its third and final flyby of Earth in November next year, so it'll drop to my "just cruising" list from now forward.

The MESSENGER mission issued a cool press release last week, indicating that they were setting up for their next flyby of Mercury -- now only 27 days and 24 million kilometers away -- using solar sailing techniques. I'm trying to get more information on how this relates to our own solar sail mission from my boss, and will get back to you with more.Cassini has just exited solar conjunction, the period during which Saturn and everything that orbits it, including rings, moons, and spacecraft, are on the far side of the Sun as seen from Earth. With the Sun in the way, radio communications were limited, so Cassini couldn't gather a lot of data, and indeed there are only 25 images on the ground from the period of September 1 to 8, most of which look like optical navigation photos. But before conjunction there were a couple of cool imaging sequences focusing on both poles of the planet. How do you tell the difference between images of the south pole and images of the north pole? Because it's still summer in the southern hemisphere, the south pole is always in sunlight. So if you see an image where you see an "eye" encircling the pole, like in this image, that's the south pole. If you see really cool cloud patterns that get cut off by the terminator (day-night boundary), with no "eye" indicating a sunlit pole, like in this image, that's the north pole. We're pretty close to the equinox -- it's only an Earth year away -- so the Sun is rapidly encroaching on the north pole. Cassini will reach periapsis (its closest approach) of Rev 84, crossing to the sunlit side of the rings, on Wednesday; rev 84 ends at apoapsis on Sunday. Cassini is on a really high-inclination orbit now, oriented nearly 75 degrees above the ring plane. We're still on roughly once-per-week orbits, and that's not going to change until late this year.

On the surface of Mars, it is midwinter (first time I've said that!) in the southern hemisphere (Ls 125°). Today is sol 1,665 for Spirit, 1,645 for Opportunity. Opportunity really now has six wheels back on level ground, and is taking a look around in preparation to strike out again across the plains to look at some odd piles of cobbles (see the photo below). Spirit is still hanging out on Home Plate; according to A. J. S. Rayl's latest rover update, they're actually going to try to hike Spirit up on to Home Plate instead of driving off of it. But that's a move that likely won't happen for some time; they don't expect power levels to rise enough for Spirit to increase activity from its current schedule of a couple of hours every three or four days until mid-October.

This image is a bit more artificial than ones I typically include on the blog -- the color is made up, and the clouds are pasted in from a different set of images entirely -- but it struck me as being pretty enough for me to relax my usual strict requirements a bit. 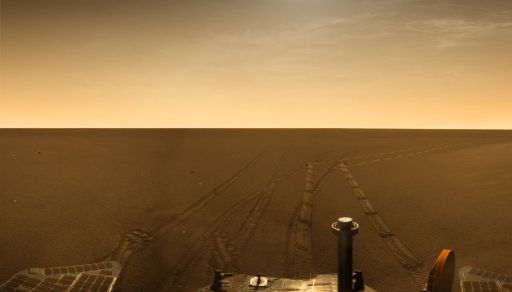 On sol 1,640, Opportunity contemplated its previous tracks near Duck Bay. The leftmost set of tracks originates on the horizon, the end of Opportunity's long journey across the Meridiani plains to Victoria crater and its arrival on sol 952, fully a Martian year ago. The next set of subdued tracks marks the beginning of Opportunity's journey around part of Victoria. The sharper tracks are from near sol 1,291, when Opportunity finally returned from its exploration of the crater rim to the brink of Duck Bay. Since then, it has been inside the crater, finally emerging again to begin a new journey across the plains.

The image is based on Navcam data, which is grayscale, and has been artificially colorized; clouds have also been added from images taken on a different sol, sol 1,621. One other piece of rover news: if you, like me, are a devotee of the Midnight Mars Browser software, you may recently have run in to problems getting your daily fix of images. They resulted from some server upgrades being done at the San Francisco Exploratorium, which serves the best archive of rover images that Midnight Mars Browser can access. Mike Howard has now updated the software to handle the changes at Exploratorium -- go to Help > Update software to get the latest version.

It's now sol 103 for Phoenix. They issued an interesting press release last week indicating head-scratching results from the Thermal and Electrical Conductivity Probe: there's lots of water in the air (as expected) but none of the evidence they expected for water being adsorbed onto soil grains (completely unexpected and totally inconsistent with the in-air measurement). On Friday there was a story on New Scientist indicating that an important capability of the TEGA instrument has broken down; I'm inquiring with the mission to find out whether they plan on issuing some more official report of what's going on with that. The New Scientist report also says that Phoenix is adopting a new strategy, for TEGA, of sample first, analyze later, apparently with the intent of getting all the arm activity over with as quickly as possible now that power levels are waning; I guess it's less power-consuming to operate TEGA's ovens than it is to operate the arm. Bear in mind though that this is just a report in one journal, not a statement from an official source. (I have to admit to being somewhat annoyed to be finding out stuff like this from New Scientist instead of from an official release or press briefing; I'll note there hasn't been even a phone briefing since the hastily-assembled press conference on the perchlorate kerfuffle, over a month ago. Obviously I could have been told the same things if I'd called to set up a phone interview after Thursday's press release, as New Scientist obviously did. But Rosetta was a higher priority, and anyway there was no hint of this stuff in that release, which otherwise did a good job of explaining the "vapor quandary.")

Here's one very cool thing from Phoenix, on sol 96: a photo of the solar panel that seems to show it "flapping," that is, it moved during the image exposure. See how the solar panel looks blurry while everything else on the deck, on the ground, and hanging in the air looks sharp? It was moving! The sharp-eyed folks on unmannedspaceflight.com who spotted this speculate that it was due to wind, and I can't think of anything else that would make the solar panel flap, though I also wouldn't have thought that Mars' air was thick enough to flap the panel up and down. But, as I write this, a dim memory is nagging at the back of my mind, that the usually stable camera platform of Spirit was somewhat disturbed over time as it was taking panoramas from the top of Husband Hill. But I don't believe any rover image has ever caught motion blur. If that's what this is, it's cool. 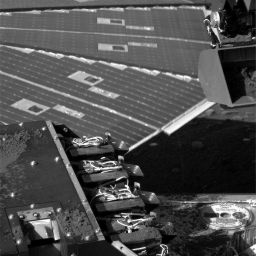 A windy day on Mars?

Phoenix took this photo of the spacecraft deck, including the MECA instrument with its four wet chemistry cells and the "Visions of Mars" disk, on sol 96. In the background, the solar panel is blurred, while everything else in the image (soil, rocks, MECA, and suspended robotic arm scoop) are sharply focused. That would seem to indicate that the solar panel moved during the image exposure -- perhaps as a result of a wind gust?
Mars Reconnaissance Orbiter's MARCI imager noted lots of cloudy skies near Mars' volcanoes this week, and also lots of small dust storms, but nothing that threatens any of the three landed missions; it noted cloudy skies particularly over Phoenix and Opportunity, both of which, in turn, saw the clouds from below.

The Mars Reconnaissance Orbiter HiRISE team recently released a slew of images titled "characterize surface hazards and science of possible MSL rover landing site." In other words, they are close looks at some of the areas being considered for MSL's mission, and are now being released to the community to aid in the final selection of a landing site. This is in advance of a meeting that will be taking place in Pasadena next week to hash out the recommendations of the science community. I plan to attend at least part of that meeting and will let you know what they decide.

There's several neat images on the Mars Odyssey THEMIS new image website this week; I'm particularly enjoying comparing and contrasting this one of overlapping lava flows on the flank of Olympus Mons (the solar system's largest volcano) -- channels carved by lava -- and this one of dendritic and most likely water-carved channels draining toward the interior of Moreaux crater.New Horizons is 10.8 AU from Earth and 20.6 AU from Pluto, and they have finally expanded the scale of their "Where is New Horizons Now?" graphic out to show the orbit of Uranus. It'll keep that scale for a while -- New Horizons won't cross Uranus' orbit until March of 2011. An update on the mission website reports that New Horizons has awakened from its slumber for its annual checkout, a prodedure to run it through its various paces, make sure everything is operating nominally, then put it back to bed for another several months of cruise. According to the mission's Twitter feed, they're going to take some time during this waking period to snap photos of Uranus, Neptune, and Pluto. All of these will be tiny, unresolved specks against the field of background stars. [Actually, New Horizons will be able to resolve Uranus and Neptune -- see this post.] Uranus will be more than 21 AU (3.2 billion kilometers) away; Neptune, almost 25 AU (3.7 billion kilometers) away; and Pluto will actually be the closest of all (but of course much dimmer, because of its small size and distance from the Sun), at 20 AU (3.1 billion kilometers away).

Over on the Japanese-language version of the Kaguya images website, they have recently released a pile of images of Kimura crater, named for a Japanese geophysicist (named in his honor the year he died, 1970). There is also now a red-blue anaglyph 3D version of their movie of a flyover of Tycho crater, which is very cool.

I don't have any news on the activities of Chang'e 1, Voyager 1 and 2, Deep Impact, Stardust, or Dawn. Genesis is in hibernation, and Ulysses appears to still be alive.