Rosetta's just a day away from Steins and now on target

There are new Rosetta images of Steins, still a faint speck among the background of stars. Here's an animation:

The Rosetta spacecraft fine-tuned its approach to the asteroid Steins using images from its navigation camera captured during the month prior to the encounter. The four images in this animation were taken daily from August 25 through 29. As the images were focused on Steins, background stars appear to move from day to day. Since the exposure was set for Steins, which is growing brighter as Rosetta approaches, the background stars get fainter with each day. Also visible (and not moving with respect to Steins) is some instrument noise. The star field observed within the camera images was compared to the catalog of stars developed by ESA's Hipparcos satellite. A total of 164 star matches was used to refine the mission's estimate of the location of Steins to within a millidegree.
I also found on the Rosetta blog an unusually detailed explanation for the need for a trajectory correction maneuver that they performed this morning. In the month before the flyby, the Rosetta team planned three opportunities to fire the spacecraft engines to correct the spacecraft's path. Such last-minute fine-tuning of an encounter distance is almost always necessary for flybys, especially for objects whose orbital paths are a little bit uncertain. This graphic explains where the navigation team calculated Rosetta was heading as of three different dates: September 1, 3, and 4. The largest ellipse is the earliest one, because as Rosetta approaches Steins, it's able to judge its apparent trajectory with respect to background stars at a much finer scale, improving the confidence with which the navigators can predict the relative positions of spacecraft and asteroid. Their last estimate, as of early this morning, put Rosetta close to but not exactly on its desired path, 800 kilometers away from Steins. (The estimate put Rosetta 14.9 kilometers from its targeted closest approach position and time, at a distance of only 791.4 kilometers, a little under 9 kilometers, or a little more than 1 percent, closer than they wanted to be.) So today they have taken advantage of one of the three planned trajectory correction maneuvers to change the velocity of the spacecraft by 11.8 centimeters per second in a direction toward that target point. 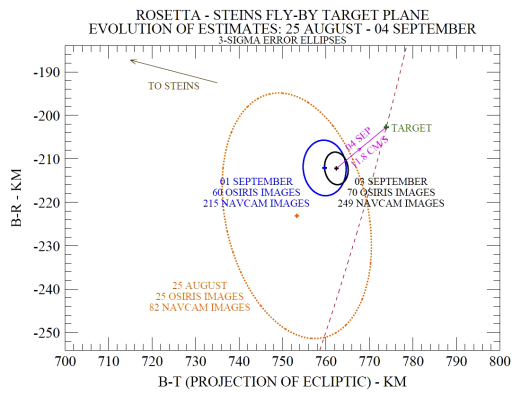 A later update on the blog indicates that this morning's maneuver was successful, and moreover that Rosetta's position may now be close enough to the desired target that the final maneuver slot, planned for tomorrow morning, just half a day before closest approach, might not be needed.

I've added a table of links to the top of our Rosetta page indicating where you can learn more about the status of the flyby. According to Daniel Muller's timeline, it looks like the ROMAP magnetometer and plasma instrument -- which is located not on the Rosetta spacecraft, but instead on its piggybacked lander, called Philae -- is just about to start a lengthy 10-hour set of observations of the space environment as the spacecraft zooms toward its encounter, now about 1 day and 1.5 million kilometers away. (Wow. 1.5 million kilometers per day is pretty fast.)