Catching up with Phoenix, through sol 91

We're now almost done with sol 93 on Phoenix. As I write, it's 21:45 at its landing site. I last checked in with Phoenix on sol 76, after it had spent two weeks doing a carnival of digging. It's been another two weeks, but there is less news for me to catch up on this time. It's not that Phoenix hasn't been busy, it's just that the work has produced fewer obvious changes to its landing site. For the sol 76 update I had to talk about several new trenches and new plans. In the subsequent two weeks, there have been no new trenches. All of the digging has proceeded in previously named places, like Stone Soup and Cupboard and Burn Alive. The work has been to prepare these sites for the acquisition of samples for the TEGA ovens and the MECA Wet Chemistry Lab. In this time, only one new sample has actually been acquired and delivered: "Burning Coals," taken from the trench called Burn Alive, to TEGA's oven number 7, on sol 85. This and the other detailed activities of Phoenix are now listed on my sol-by-sol summary page.

Almost all of what I'll talk about in this update is operational details -- where they dug, on which days, and so on. There's little science to report. I've received some comments from readers (and also my boss!) indicating frustration with the lack of results reporting. There is certainly more that the team could be telling us about what they think they see in their chemical analysis -- but it would be at the risk of having to retract it later, if their interpretations changed. I'll admit that I am as curious as anyone about what TEGA has seen in its ovens and what the Wet Chemistry lab has seen in its beakers and what the Optical Microscope is telling us about the shapes and sizes of Mars' ubiquitous dust grains. But I'm willing to be patient, to let the team focus their efforts on doing everything they can with this spacecraft during its limited life on Mars. There'll be plenty of time for explanations and interpretations after Phoenix has sent its last data bit to Earth -- an event that will happen all too soon. As long as the team is doing enough science analysis to guide their work with the lander, I'm happy; I'd like to ask you all to be patient, too.

This would probably be a good time for me to post an updated map of the "work volume," which is what they call the couple of square meters of Mars that are within the reach of the robotic arm. Helpfully, the Phoenix team spent part of sol 84 taking the photos necessary to build a new panorama of the work volume. You can compare this map with the one in my previous Phoenix post to see what's changed.

The Phoenix 'work volume' as of sol 84

Between sols 67 and 84 Phoenix was in a digging frenzy, opening up several new trenches from which it would later aim to acquire samples for its analytical instruments. Cupboard was opened on sol 67, Neverland on sol 68, Stone Soup on sol 74, and Burn Alive on sol 75.

Trenches Stone Soup and Burning Coals are being groomed for samples for WCL. The team is also working on obtaining an ice-rich sample from Snow White for TEGA.

As I explained in my previous post, when the mission went to an Earth-time schedule for its science team, they lost their rapid-planning ability (where they planned each sol's activities over Phoenix "night," between sols). For most of the calendar, then, the Phoenix team has to plan each sol based on images that are two sols old. That's why they opened up so many trenches at once -- they're alternating among the trenches so the lag between the work on Mars and the planning of the next activity on Earth doesn't eat into their precious few remaining days. The three main areas of activity have been at Stone Soup, Upper Cupboard, and Burn Alive.

I think they've accomplished their goal at Burn Alive now, having successfully delivered the "Burning Coals" sample from there to TEGA. This sample is from a depth of a couple of centimeters below the surface. It fills in the sequence of TEGA samples: one from the surface (Rosy Red 3), one from the boundary of the ice table (Wicked Witch), and now one in the middle. Once this sample is analyzed, TEGA will have accomplished all the work that is required for TEGA in Phoenix' mission success criteria -- and they still have four ovens to play with. Kudos to the team for that! Here's some images documenting the delivery of Burning Coals to TEGA oven number 7.

On sol 85, TEGA dumped a small sample of soil, called "Burning Coals," onto the open doors of TEGA oven 7. The before-and-after animation shows little soil on the TEGA instrument around oven 7 on sol 84, then lots of soil on it on sol 85. However, no soil is visible on the TEGA screen on sol 85, indicating that everything that landed there fell through the screen into the TEGA hopper. Burning Coals was taken from the trench called Burn Alive, and serves as an intermediate-depth sample, between the surface sample from Rosy Red 3 and the ice-interface sample from Wicked Witch.
Having completed the mission success requirements for TEGA, I think they are getting ready to return to the challenge of getting an ice sample into one of those as-yet-unused ovens. Their previous attempts to get ice samples resulted in the material getting stuck in the scoop, and they haven't yet solved the problem of how to get it out of the scoop and into TEGA. I was very confused when I updated the Phoenix robotic arm camera raw images page to see that the robotic arm was being poised over TEGA oven 0, one of the ovens that's already been used, and is now closed, unable to receive any further sample material -- what would they be doing that for? I asked found out that they are going to use one of the already-open ovens to test their ice-rich-soil delivery process, to make sure they can get a sample into and out of the scoop and through the screen, and once they are satisfied that the process works, they will move on to an unused oven.

At Stone Soup, they are trying to dig very, very deeply. Stone Soup is in a region that is a boundary between two polygons, and the ice table doesn't seem to continue across that boundary, so they're getting much deeper -- 18 centimeters, according to the latest press release. It looks like on sol 90 they decided they had done enough digging and tried to get a sample for the Wet Chemistry Lab, but they didn't get enough, so they are going to have to try again, maybe after widening the trench a bit. A previous press release said that they were hopeful that this sample would appear different to MECA than the Rosy Red and Sorceress samples did, because of its much greater depth from the surface. Apparently Rosy Red and Sorceress appeared similar to MECA.

At Upper Cupboard, they are trying to figure out whether there are salts present in the ice-rich material at the top of the ice table. If there are, they badly want to get those salts into the MECA instrument. Ray Arvidson explained the experiments they were planning to try for my last update; the images suggest they've been trying all those experiments, but I would guess that since they went for the Stone Soup sample, the experiments have failed to prove the existence of much in the way of salts in the soil there. It's hard to prove a negative -- there could definitely be salts present -- but they don't seem to have the positive evidence they need to proceed with using up a precious Wet Chem cell for a sample from Upper Cupboard.

In the meantime, there's been lots and lots and lots of imaging. They're proceeding with imaging, one "wedge" at a time, for the Happily Ever After Panorama. They've also taken several more images of Holy Cow, that area under the lander, including of the "moldy" lander legs. A lot of you have written in to me to ask if I know anything more about those moldy legs. I don't. But here's an updated animation, that shows (in my opinion) very little change in the appearance of the "mold" from sol 31 to sol 90. The illumination angle is quite different in those two images, by the way -- the sol 8 image was taken at 15:01, the sol 31 image at 14:40, and the sol 90 image at 09:42, much earlier in the day.

Eight sols after landing, Phoenix used its robotic arm camera to photograph the legs that support the lander. One of the lander legs was observed to be covered with bright splotches after landing. On sol 31, the image was repeated in order to look at the ice patches called Holy Cow. The splotchy lander leg had more splotches on sol 31 than it did on sol 8. Another look at it on sol 90 showed few, if any, changes in the splotches.
Another item from today's news release, which I'll just reproduce here without comment: "The team is currently working to diagnose an intermittent interference that has become apparent in the path for gases generated by heating a soil sample in the Thermal and Evolved-Gas Analyzer [TEGA] to reach the instrument's mass spectrometer. Vapors from all samples baked to high temperatures have reached the mass spectrometer so far, however data has shown that the gas flow has been erratic, which is puzzling the scientists." Hopefully they'll have more details to report on the problem and its implications after they have studied it a bit more. It has sure not been an easy road for the TEGA team.

Finally, a last item: "The mission's meteorological instruments have made daily atmospheric readings and have watched as the pressure decreases, signaling a change in the season. At least one ice water cloud has been observed and consistent wind patterns have been recorded over the landing site." That's another checkbox that can be ticked off for Phoenix' mission success criteria. Meteorological reports are going to become much more common on Phoenix as the season descends toward autumn. The mission is already seeing its first sunsets. The spacecraft is now being plunged into darkness for more than an hour each day. You might call that the beginning of the end for Phoenix -- but the lander should still have at least a month, probably more, of hefty arm operation, and will be reporting on the weather and working steadily on its "Happily Ever After" panorama through much of November. 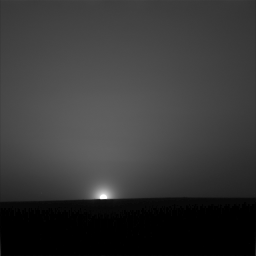 On sol 86 of Phoenix' mission to Mars, the Sun disappeared from view for the first time, vanishing behind a slight hill to the north of the lander. This image shows the sun rising on the morning of sol 90, Aug. 25, 2008, the last day of the Phoenix nominal mission; it was taken about 51 minutes after local midnight. The sunrise came after a 75-minute-long "night" of no direct sunlight, although the Sun was near enough to the horizon that the sky was still bright with twilight.