Pictures from the past: Viking 2 approaches Mars

On Monday I pointed to the awesome new website for the VMC instrument on Mars Express and mentioned that the camera can get views of Mars in a crescent phase. I thought it might be the first spacecraft to do so, but a couple of readers wrote in to tell me that they remembered crescent views of Mars from Viking 2. A Google search quickly yielded an image on Astronomy Picture of the Day from 1999, showing a tiny, garishly colored view of a crescent Mars.

This Viking Orbiter 2 image of a crescent Mars, a version posted on Astronomy Picture of the Day in 1999.
So, yes, Viking 2 did take such a photo -- but boy, is that an ugly picture. I thought I might be able to do a little better than that. The Viking 2 data set is pretty easy to get to, on the Imaging Node of the Planetary Data System. I located the original files taken by Viking 2 as it approached (Viking 1 did not take any approach images I am told that it did; I'm looking for them.). The set includes 11 three-color views of a crescent Mars. For the first six, the whole disk of Mars fit in one photo. The last five were mosaics, where Mars was too big to fit into one image.

Raw Viking images contain a lot of speckly noise, random missing lines, and reseau markings, black dots painted onto the camera optics to help the imaging team remove distortion from the images. Thankfully, there is a piece of software that you can download from Peter Masek's website that copes with the first two of these problems. (His site also contains a lot of background information on how the Viking cameras worked.) I used his software to despeckle and convert the original files to a format that Photoshop could read. Then I took the images into Photoshop, combined red, green, and violet filter images into a color composite, and used the Photoshop clone stamp tool to remove the reseau markings by painting over them with bits of color from elsewhere in the image. Voila, a spectacular set of Viking 2 images of Mars' looming crescent.

As Viking Orbiter 2 approached to orbit Mars on August 6, 1976, it snapped many images of Mars' approaching crescent, the first such images ever taken of the red planet.
Those six are all the non-mosaic ones. Ken Edgett (one of the people who originally emailed me about the existence of these photos) helpfully pointed out some surface features on the biggest one. 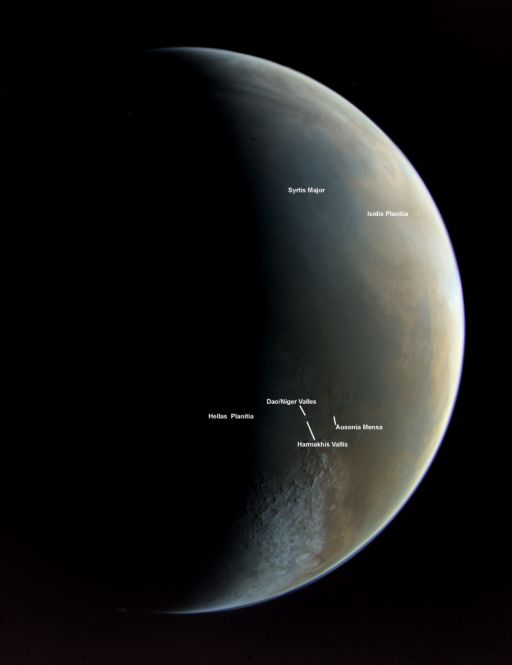 I did take a crack at one of the mosaics, the last one Viking 2 took on approach. The mosaics are not hard to jigsaw together but getting the color to match between the frames was beastly difficult and I'm still not happy with the result. Still, it is a breathtaking view, with the Sun rising on Valles Marineris at the center of the disk. And, near the bottom, there's a great view of Galle, otherwise known as the Happy Face Crater. 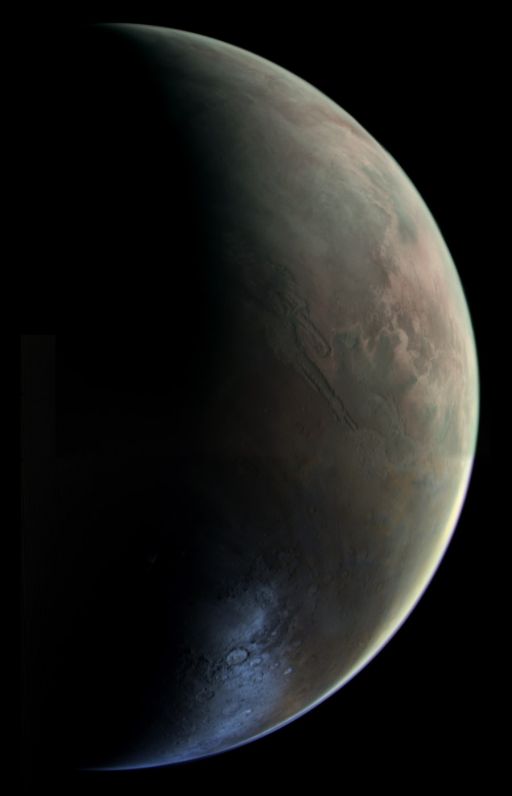 This is the final image of Mars captured by Viking Orbiter 2 as it approached for its orbit insertion on August 6, 1976. It is a two-image mosaic. Valles Marineris is clearly visible at the center of the disk, crossing the terminator. In the south, frost extends up into the Argyre basin; on its edge, with a dark outline, is the crater Galle, famous for the eroded remnants of a central ring that makes it look like a happy face.
I am sure there are many people out there who can do a better job than I can with these color images. Here is a Zip file containing all of the approach images, already despeckled, in PNG format (22 MB); I hope some of you will take a crack at building some of those other mosaics!