Asteroids and comets to scale, as a single image for printing or Powerpoint

After posting the montage of asteroids and comets to scale last week I got a lot of requests for a single-image version of the montage. Your wish is my command! Here is a single image of all of the asteroids and comets that have been visited by spacecraft, sized to be dropped in to a Powerpoint presentation, or even used as a desktop image, at 1600 by 1200 pixels. In the caption I've provided links to a much larger version of the image, a whopping 6000 by 4500 pixels -- that's handily large enough to print as a 16 by 20 inch (40 by 50 cm) poster or even larger. Of course, I'm just going to have to update this in two weeks once Rosetta has returned photos of Steins! Steins, by the way, is supposed to be about 5 kilometers in diameter, roughly the size of Annefrank or Wild 2, so I shouldn't have any trouble fitting it in. But once Rosetta visits Lutetia in July 2010, I'll have to redo the layout -- Lutetia is expected to be about double the diameter of Mathilde. Thanks very much to Joel Parker for correcting some of my numbers on the body diameters. 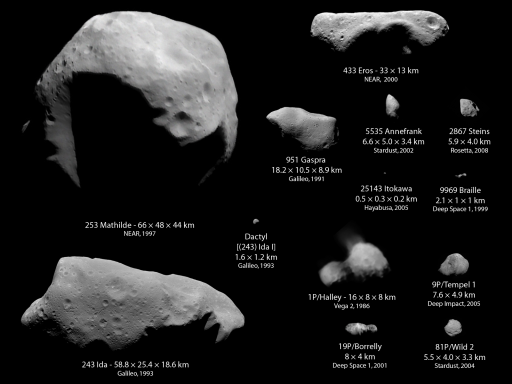 All asteroids and comets visited by spacecraft as of early 2008

The total of four comets and eight asteroid systems (including nine separate bodies) that have been examined up close by spacecraft are shown here to scale with each other (75 meters per pixel, in the fully enlarged version). Most of these were visited only briefly, in flyby missions, so we have only one point of view on each; only Eros and Itokawa were orbited and mapped completely. This image is also available without text. There is also a larger version at 20 meters per pixel (6000x4500 pixels, 4.2 MB), with or without text (3.9 MB).

Credits: All images NASA / JPL / Ted Stryk except: Mathilde: NASA / JHUAPL / Ted Stryk; Steins: ESA / OSIRIS team; Eros: NASA / JHUAPL; Itokawa: ISAS / JAXA / Emily Lakdawalla; Halley: Russian Academy of Sciences / Ted Stryk; Tempel 1: NASA / JPL / UMD; Wild 2: NASA / JPL.While I'm talking about asteroids and comets, I want to remind all of you amateur astronomers out there that the deadline for the next round of The Planetary Society's Gene Shoemaker NEO Grants is in a month, September 30. Get your proposals in!