Well, we had a lovely family vacation at the beach and I managed to keep from doing any work. The same can't be said for my computer: I gave it plenty of work to do, downloading the complete set of Venus Express camera data, which was just last week released to ESA's Planetary Science Archive. It took four days, but it's done! If you don't share my love of raw data, skip the next paragraph...

I have posted a page that serves as an overview of a third of the Venus Express VMC data. These are the images taken through an ultraviolet filter, which nicely showcase Venus' clouds. (Actually, technically, it's taken through the ultraviolet objective -- VMC has four separate objectives, each of which is allotted a corner of a single CCD; the objectives are fitted with four different filters, one in the ultraviolet, one in visible wavelengths, and two in near-infrared wavelengths.) At present this is just a browse page, with thumbnails only (though I do provide the links from which you can FTP individual PDS formatted files, for those of you who know what that means). It will be a few days before I'll be able to convert all the data to a more readily useable format.

A quick view of part of a Venus Express orbit, captured through the Venus Monitoring Camera (VMC)'s ultraviolet channel. The images were taken about an hour apart as the spacecraft approached Venus. Venus Express' orbit is polar and highly elliptical, with its closest approach near the north pole, so it spends a great deal of time over the south pole. The orbit is exactly 24 hours long, which is designed as a cost-controlling measure; Venus Express can always communicate with Earth from the same position on its orbit and use ESA's own deep-space radio communication antenna in New Norcia, Spain.
And while I'm speaking of VMC, there is another VMC instrument sharing data starting last week, this one on Mars Express. This instrument was not intended for science; it was last used to image Beagle 2 separating from the spacecraft, then turned off for three years. It's now on again, returning low-resolution but spectacular images of Mars -- it's the only camera currently capable of capturing a global view of the planet in one image, and the first (as far as I know) to return crescent views of Mars, like the one below. I'll have more to say about this in the future; in the meantime, you can crawl around the Mars Express VMC website, and note that they are seeking amateur help with image processing. 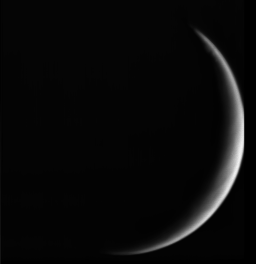 Mars Express captured this unusual view of a crescent Mars on April 21, 2007, using its VMC camera.

Big news to look forward to next week is the encounter of Rosetta to asteroid 2867 Steins, now only 11 days away. The first images resolving the asteroid are expected to be shown on Saturday, September 6, at a press event at the European Space Operations Centre at 12:40 CEST (10:40 UTC); hopefully they'll be released on the Internet concurrently with that. There are already images on Earth showing that Rosetta is tracking Steins just fine. Check the science timeline to see what's happening every day, and watch Daniel Muller's website for a realtime countdown of events.

As Rosetta approached for its Steptember 5, 2008 flyby of asteroid 2867 Steins, its OSIRIS high-resolution camera spotted the faint object against the background of stars. This animation cycles between two images taken on August 7 and 11, 2008.
Hey, my top three news items for the week are from ESA missions! That's a first.Cassini is getting close to the period of Saturn solar conjunction. For a one-week period beginning September 1, there will be little data returned. There's been plenty of raw data to look at from the last two weeks, however, nearly 1000 images. Lots of beautiful rings images, including lots of the G ring; some distant, low-phase, multicolor views of Mimas, Tethys, Dione, Tethys, and Rhea (and I also liked this single optical navigation shot of crescent Tethys; a lovely 5-by-2-frame, true-color mosaic on Saturn, with the ring shadow nearly disappearing now that we're less than an Earth year from equinox; but my hands-down favorite image sequence was the one below, showing Rhea entering Saturn eclipse, taken on August 19. Tomorrow Cassini will reach periapsis (its closest approach) of Rev 82, crossing to the sunlit side of the rings, on Tuesday; rev 82 ends at apoapsis on Friday. Cassini is on a really high-inclination orbit now, oriented nearly 75 degrees above the ring plane. (A polar orbit would have an inclination of 90 degrees, so it's really not far from polar.) We're still on roughly once-per-week orbits, and that's not going to change until late this year.

On August 19, 2008, Cassini observed Rhea as it passed into Saturn's shadow. These eclipses are becoming more frequent as Saturn's equinox approaches. Cassini's science team is particularly interested in using the eclipses to study how the temperature of the icy surface drops after its quick plunge into darkness, and, later, how quickly it heats when the lights come back on again.
On the surface of Mars, it is early winter in the southern hemisphere (Ls 118°). Today is sol 1,651 for Spirit and 1,621 for Opportunity. And, as I write this, the clock has ticked over to sol 90 for Phoenix, the last day of its primary mission. I will have more to say about Phoenix tomorrow (or Thursday at the latest), when I'll get caught up on that mission's progress over the last two weeks; I'll just mention that they did get a sample from the Burn Alive area into TEGA oven 7, the fourth sample for TEGA, which (once it's analyzed) will fulfill the mission success criteria for that instrument. I believe that all that leaves for Phoenix mission success is the delivery and analysis of one more Wet Chemistry Laboratory sample.Spirit is still parked on the edge of Home Plate, in the same position it has occupied since sol 1,464 (February 15), with its solar cells pointed northward toward the winter sun. Opportunity is still driving up the slope of Duck Bay, heading out of Victoria crater; it made major progress last week. There were two interesting milestones this month -- it's now been about one Earth year since Opportunity entered Victoria, and it's been about one Mars year since Opportunity arrived at Victoria. 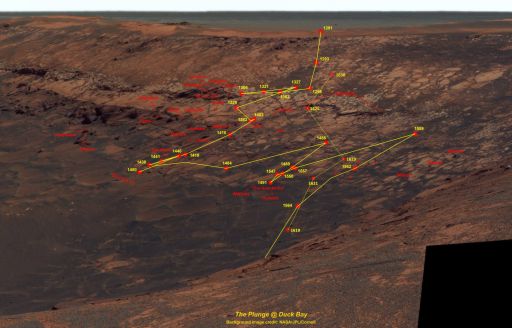 Opportunity's path around Duck Bay as of sol 1630

As of sol 1630 (August 25, 2008), Opportunity had nearly finished its exit from Victoria Crater.
Mars Reconnaissance Orbiter's MARCI imager noted lots of cloudy skies near Mars' volcanoes this week, and also lots of small dust storms, but nothing that threatens any of the three landed missions.

I lack time to explore last week's orbiter releases, so I'll just point you over to the Mars Reconnaissance Orbiter HiRISE and Mars Odyssey THEMIS new image websites.MESSENGER is just 41 days and 41 million kilometers from their second Mercury flyby. New Horizons is 10.4 AU from Earth and 20.8 AU from Pluto. I don't have any news on the activities of Chang'e 1, Kaguya, Voyager 1 and 2, Deep Impact, Stardust, or Dawn. Genesis is in hibernation, and Ulysses appears to still be alive; you can hear an update on that in this week's Planetary Radio.