Beautiful mosaic from the Enceladus encounter

In an amazingly quick piece of work, the imaging team has already assembled the 8-frame mosaic captured by Cassini as it receded from its close encounter with Enceladus last week. This is a really difficult piece of work. There are 32 separate camera images in this mosaic -- 8 high-resolution images taken through a clear filter to get the detail, and 24 taken at half the resolution through ultraviolet, green, and infrared filters to get the color. 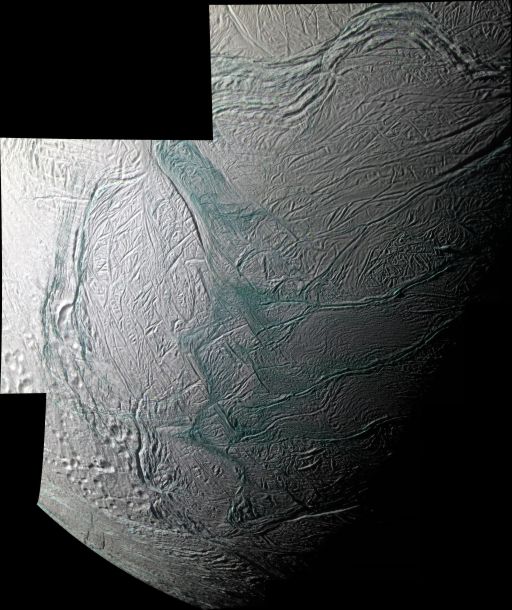 As Cassini receded from its August 11, 2008 flyby of Enceladus, it captured an 8-frame mosaic of the terrain of the southern hemisphere through five different camera filters. Those data have been combined to create this huge mosaic. The south pole is at the right, near the day-night boundary. All four of Enceladus' south polar sulci (or "tiger stripes") are visible: from top to bottom, they are Damascus, Baghdad, Cairo, and Alexandria. Circling around them is a scalloped annulus of deformed material, whose ridges and furrows are thrown into stark relief by the low-angle of the late-summer sun on the southern hemisphere. The sulci and that scalloped annulus are noticeably bluer than the rest of Enceladus in this enhanced-color image, indicating that they are made of solid or coarsely crystalline (and likely fresher) ice. In some places, there are rainbow colors -- these are imaging artifacts. Toward the equator (at the left side of this mosaic), the heavily tectonized terrain gives way to a cratered and therefore much older surface.
Now, the rovers take mosaics of many more images than this all the time; in that context, 32 images doesn't seem like all that much data. But when the rovers take 32 images for a panorama, they're usually doing it from what amounts to a tripod with a pan-and-tilt mount with very accurately known geometrical properties. Take one set of pictures, pan by N degrees, take the next set, tilt by N degrees, take the next set, and so on. Each multi-filter set taken at one "pointing" overlaps perfectly, without any notable registration error.

Cassini, on the other hand, was flying quickly away from Enceladus while Enceladus was moving in its own orbit around Saturn. So, to begin with, all of those multi-filter sets of images aren't correctly registered. For example, the imaging sequence started with a clear-filter photo taken when Cassini was 4,742 kilometers from Enceladus. Then it rotated the ultraviolet filter into place and snapped the next picture, but by then it was 5,800 kilometers from Enceladus. The different distance means that the ultraviolet image is about 35 kilometers across, while the clear image covers much less area, less than 29 kilometers across. To build each color frame, the component color images had to be resized and coaligned. Then that low-resolution color data had to be overlaid on each clear-filter image.

When it came time to assemble the eight color images into a single mosaic, the rotation of Enceladus also had to be taken into account. To do that, it wasn't enough just to stretch the images; the geometric distortion caused by the rotation of the moon during imaging would really create a warped image. So each of the eight frames had to be tagged with geometric information about where each of its corners were, and where the spacecraft was when it captured the images. Then all the images were stretched -- the official terminology is "transformed" or "reprojected" -- to how they would appear to a viewer located a very long distance above Enceladus at 63.0 degrees south latitude, 281.3 degrees west longitude. (Technically, this is called an "orthographic projection" -- it assumes the point of view of a viewer at infinity.) Once they were transformed to a common map projection, they could finally be assembled into a finished mosaic.

It's difficult work and amazing it was done so quickly! Kudos to Jason Perry.

If you'd like to mess about with the images, I've completed updating my Enceladus flyby raw images page. There was an error in the original map showing the footprint locations for this eight-frame mosaic, which I've now fixed. 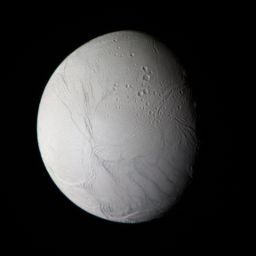 This is a wide-angle shot taken during the July 14, 2005 close encounter with Enceladus through red, green, and blue filters. Gordan Ugarkovic has attempted to process the data so that it appears approximately as it would to the human eye. The tiger stripes or sulci are darker and bluer than surrounding terrain, but the difference in color is much more subtle than it appears in most Cassini color images, which are typically made with ultraviolet, green, and infrared filters (a broader range of the electromagnetic spectrum) and are stretched to enhance color differences.