Enceladus is so close I can touch it

At least that's how it seems -- ridges, valleys, sunlit peaks and shadowed hollows, all covered with boulders, in amazingly sharp focus considering Cassini had to spin at top speed to compensate for just part of the amazing 18 kilometer-per-second relative speed of the spacecraft and the moon at the height of the flyby. Here are four of the amazing photos from the Skeet Shoot. (For more on the Skeet Shoot, read my preview story.) First, the closest, which is also the most enigmatic, because of the low sun angle: 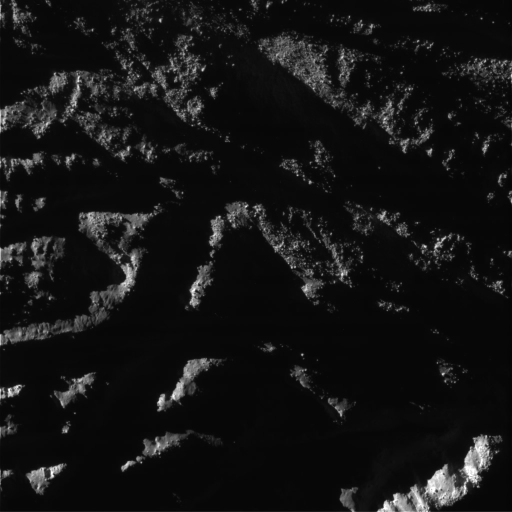 As Cassini receded from its close flyby of Enceladus on August 11, 2008, it took a series of seven images with its narrow-angle camera while the spacecraft spun to partially compensate for the fast motion of Enceladus across the field of view. This is the first of those, taken from closest range (1,288 kilometers), with a resolution of about 10 meters per pixel. The image is taken close to the terminator (day-night boundary), so sunlight coming from the upper left glances across the folded terrain, hiding most of the valleys in shadow. There are large boulders everywhere. This version has been rotated 180 degrees to match the orientation of the flyby preview map.
What I notice most about this photo is the roundish boulders, all over the place. They seem to be of a pretty common size of a small number of tens of meters across (or maybe they have a maximum size of a few tens of meters but go smaller to sizes that are lost at the resolution of this image, which is 10 meters per pixel). And my general impression is that the boulders are brighter than their surroundings, although this could definitely be caused by the illumination angle -- with the Sun coming from such a low angle, the near-vertical sides of the boulders will be more brightly lit than the closer-to-horizontal ground that they sit on. What are those boulders? Impact ejecta? They seem too big to have been tossed out of the vents. Maybe they're big fluffy snowballs? Enceladus' gravity is pretty low. Another very cool thing about this photo is that you can faintly see some details even within the shadows, lit up by light reflected off the sunlit walls.

Next is a lovely overlapping pair, shots numbers 3 and 4. These overlap over one of the large "sulci" that cross Enceladus' south pole, Cairo sulcus. 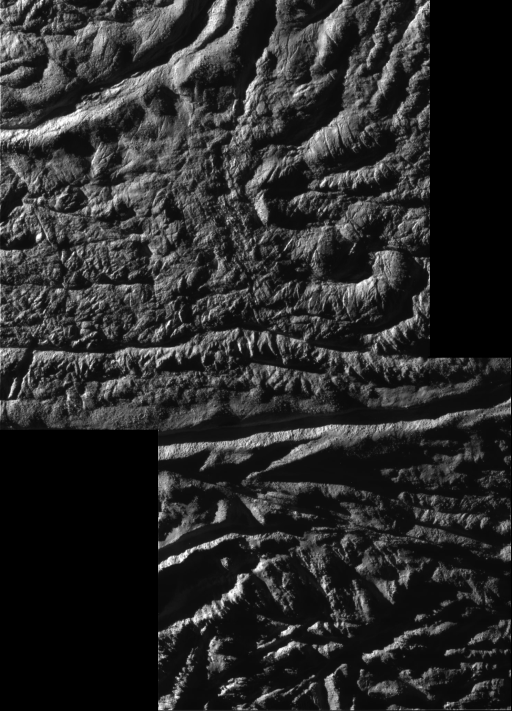 As Cassini receded from its close flyby of Enceladus on August 11, 2008, it took a series of seven images with its narrow-angle camera while the spacecraft spun to partially compensate for the fast motion of Enceladus across the field of view. This is a mosaic of the third and fourth, taken from ranges of 1,567 and 2,621 kilometers. Near where the two images overlap they cross Cairo sulcus, one of four fissures that seam Enceladus' south pole. Near the top of the image, an unnamed sulcus cuts across one corner. This version has been rotated 180 degrees to match the orientation of the flyby preview map.
The lower left corner of shot #3 (the lower of the two frames in the mosaic above) is supposed to overlap one of the "hot spots" seen in the CIRS data. There is one particularly wide valley on the left side of that image -- I wonder if that is it? And what about the strange lumpy circularish hole near the right edge of shot #4, the upper frame in the mosaic? Could that be a vent? At this scale I can still see the boulders -- is it my imagination, or are there more boulders near Cairo and the unnamed sulcus, and fewer in the heavily fractured area between them? Or is it just that the texture of the heavily fractured area makes it hard to see the boulders? I think it's interesting how a lot of the ridges are cut with transverse fractures. Yet if you look at Cairo sulcus itself, no transverse fractures. Is that because it's fresher, it's what's currently accommodating deformation, and the stuff farther away from it is colder, more brittle, older? And what's that very straight fracture cutting across the landscape at an angle to Cairo sulcus, near the bottom of the image? It looks an awful lot like a shear zone to me, I guess because it seems to me that the ridges don't match up very well on each side of that straight fracture.

COOOOOOOOL. There will be much more interpretation to come. In the meantime, I am trying to get a handle on the images that have been released so far, and where they fit on the Enceladus pre-flyby image planning maps; I'm posting my notes here for your enjoyment. Now I must tear myself away from Enceladus and go do mommy stuff for a couple of hours.

By the way, I will have a Ustream chat tomorrow at the usual time (1200 PDT / 1900 UTC) where I will show some of these pictures and talk about them and take questions.