Let's check in on each of the 20 spacecraft actively exploring the solar system.

But first, a calendar reminder: on August 14-15, there is a conference at APL called the Great Planet Debate. As part of this conference, on August 14 at 16:30 EDT (13:30 PDT / 20:30 UTC), there will be a webcast debate between Neil DeGrasse Tyson and Mark Sykes, moderated by National Public Radio's Ira Flatow, on the nature of planets. Again, you need to go to the conference website to register in advance in order to watch.Cassini is just a few hours shy of Enceladus close approach on a 54-kilometer flyby. Check here tomorrow afternoon for news and pictures! Here's the last view of Enceladus taken before they turned to Earth to do radio science and to empty out Cassini's data recorders in advance of today's action: 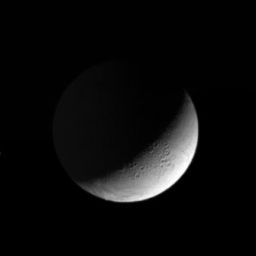 Cassini snapped this image on August 11, 2008, shortly before turning to Earth to empty its solid-state recorders in preparation for its 54-kilometer flyby of the Moon. The view is of the north polar region. The night side of Enceladus, on the left side of this image, is faintly lit by Saturnlight.
In the meantime, enjoy this terrific animation of part of a Prometheus orbit, with a dip into the F ring (Quicktime format, about 5 MB), put together by Gordan Ugarkovic from a set of images returned by Cassini on Saturday. Also, last week, they posted to the Photojournal atlases of Tethys, Enceladus, and Dione. There are also associated map releases for Tethys, Enceladus, and Dione. These maps are created by the United States Geological Survey the German office of the Cassini imaging team at DLR to provide base images for geologic mapping and other research that seeks to understand what the surface of each moon tells us about is interior. (I originally said they were created by the USGS, which is wrong -- they are created to standards set forth by the USGS, in proxy for the International Astronomical Union. Thanks to Preston Dyches for the correction, who also told me "Iapetus is next!") However, they are works in progress; there is already better image data available for some places (especially Enceladus). I think these have existed for a while, but I didn't notice them until they were posted to the Photojournal. Another notable release this week was from the RADAR team, showing bright channels on Titan, off the southwest side of Xanadu. 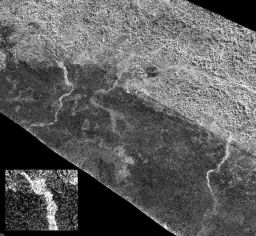 This is a small segment of a long RADAR image captured by Cassini on its May 28, 2008 flyby. It shows terrain to the southwest of the bright region called Xanadu; Xanadu is to the upper right, plains to the lower left. Channels cut across the incised terrain of Xanadu and pour out onto the plains. Source
On the surface of Mars, it is early winter in the southern hemisphere (Ls 111°). Today is sol 1,638 for Spirit, 1,617 for Opportunity, and 76 for Phoenix. Covering that perchlorate hullaballoo on Phoenix last week really set me back in my regular updates of what's been happening on that mission; I will try to bring all my pages back up to date this week, but probably won't get to it until Wednesday. The latest news is that on Saturday, vibration of TEGA got sufficient soil into oven 5 for analysis, so that's good. Baking of that sample is supposed to have started yestersol. At the rovers' landing sites, Mars Reconnaissance Orbiter's MARCI imager is reporting cloudier skies. Opportunity is driving steadily up the slope of Duck Bay, heading out of Victoria crater.

Among last week's Mars Reconnaissance Orbiter HiRISE image release were some nice ones...this one is labeled "layered deposits," and indeed that's what is shown, but more striking visually are the isolated, odd, elliptically-shaped, black sand dunes that dot the crater floor here and there. I also love the bouldery details in the image of the head of Athabasca Valles. There wasn't anything new from Mars Express this week, and nothing from Mars Odyssey THEMIS moved me to write.Rosetta is closing in on asteroid (2867) Steins for its September 5 encounter. Daniel Muller's website tells me it's 25 days and 36 million kilometers away.

The MESSENGER team has released more images from their crop of Science articles. I like last week's feature comparing wrinkle ridge rings (try saying that five times!) on Mars and Mercury. MESSENGER is 56 days and 84 million kilometers away from its second Mercury flyby.

I do have a new news source for Hayabusa updates, this page on "Hayabusa today" from the JAXA website. The site is in Japanese; the link takes you to the Google translation, which doesn't work particularly well for this site, but from what I can understand it seems that Hayabusa is now finishing a period of solar conjunction, when it is on the far side of the Sun as seen from Earth. That geometry makes radio communication difficult for any spacecraft, and I'm sure it was a concern for limping Hayabusa; but according to the page it appears that they've managed to maintain decent radio communications, and Hayabusa is still on track for a June 2010 return of the sample capsule to Earth.New Horizons is 10.1 AU from Earth and 20.9 AU from Pluto. I don't have any more news on Chang'e 1's possible impending data release; there's nothing new from Kaguya or Venus Express either. Deep Impact is continuing its EPOCh observations of extrasolar planets. There have been no new Voyager 1 and 2 status updates since May 30. Dawn and Stardust are in cruise mode, talking to Earth from time to time; Genesis is in hibernation. Also, Ulysses appears to still be alive.