Let's check in on the twenty spacecraft exploring the solar system. First up: I was expecting this morning to find some images from Mars Express' closest-ever encounter with Phobos, but so far there's nothing new on the ESA website. I'll keep checking.

And the other item I've been watching closely is Phoenix' attempt to get an ice-rich soil sample to TEGA. It didn't work out as they had hoped over the weekend, because the sample stuck to the inside of their bucket; new pictures that came down on Sunday show that the sample eventually came loose and plopped onto the top of the MECA instrument. While this is a setback and was not, of course, the predicted result, it is typical of the difficulty of exploring Mars and trying operations that have never been tried before. If I understand yesterday's release correctly, on sol 62 (which is wrapping up now) they were going to try a repeat of the sol 60 acquisition cycle, just with less rasping (to avoid heating up the instrument) and with more scoop-shaking during delivery. There is no word yet on how this went, and not all the images have been downlinked yet, but there is one promising-looking photo that shows, at least, that there is more soil on top of the TEGA screen than there was on Saturday (see below). My robotic arm camera raw images page is updated to sol 62. My hope is that some time this week -- if not yet today -- there will be a successful delivery. At that point I'm sure JPL will call a press conference, and I'll give you a report on that when it happens. 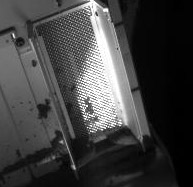 At in the morning of sol 62, Phoenix tried a second time to deliver a sample of ice-rich soil rasped from Snow White to TEGA oven 0.

After a very long lull in targeted flybys, Cassini is finally meeting Titan again on Thursday, zooming in over the south pole, crossing the ring plane, and flying away over the north. One thing that's sort of interesting to note on the tour page is the relative speed between Cassini and the moons during flybys. Cassini flybys of Titan happen at relative speeds of about 6 kilometers per second. Now, this isn't slow by any means, but it's roughly three times slower than the relative speeds at which it encounters Mimas and Enceladus (there's a nontargeted flyby of Mimas coming up a week from today, and the next much-anticipated targeted flyby of Enceladus happens two weeks from today). This has to do with the fact that Cassini is on an elliptical orbit. A consequence of Kepler's second law of planetary motion is that bodies on elliptical orbits travel much slower when they are near apoapsis -- the farthest reach from the body they're orbiting -- than near periapsis. When Cassini is close to Titan, it is also close to apoapsis. Mimas and Enceladus are much closer to Saturn, so when Cassini is close to Mimas and Enceladus, it's also much closer to its periapsis, and is traveling much faster. That higher speed means a much quicker encounter. Add to that the fact that Mimas and Enceladus are about a factor of 10 smaller than Titan, and you can see that there just isn't antyhing like as much time to do good science on an Enceladus flyby as there is on a Titan flyby. 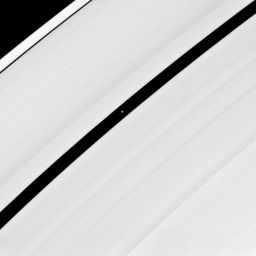 Pan is a tiny, weird, saucer-shaped moon floating in the Encke gap near the outer edge of Saturn's A ring. This photo was taken by Cassini from the sunlit side of Saturn's rings on June 10, 2008.
Cassini just this morning passed periapsis of Rev 78, crossing to the sunlit side of the rings. With the once-per-week orbits, periapsis happens on Mondays and apoapsis on Fridays. Last week was a good one for image releases of moons: there were views of Mimas, Epimetheus, Dione, Rhea, and a particularly nice shot of saucer-shaped Pan in the Encke gap (see at right). Also notable this week was that Cassini took two five-filter, 5-by-2-frame wide-angle-camera mosaics on Saturn and its rings; three of the filters are red, green, and blue (others are infrared). That means that the data exist to create beautiful, high-resolution (roughly 5,000 pixels wide by 2,000 pixels tall) portraits of Saturn and its rings. Unlike many previous portraits of Saturn, these were taken from the southern (sunlit) side of the ring plane, so they show the rings as we typically see them from Earth, lit by the Sun. And the phase is pretty low, a nearly full view of Saturn; all in all, it's promising that these sets of images will allow new, iconic versions of global views of Saturn to be created, once all the processing is done. The processing on these can be kind of a bear, though. I tried to do a quick-and-dirty version of one of the mosaics, just using the red-filter images. The Photomerge utility in Photoshop choked on them, so I tried merging them by hand, and decided to quit fiddling after about 20 minutes of work. Here's my best effort, which still contains obvious seams that I couldn't get rid of (it's beastly hard to make all the different lines and angles line up, especially as Cassini's point of view shifted slightly between each frame). I can't wait to see what one of the amateurs does with these when they get their hands on the data!

On July 23, 2008 Cassini took two five-filter, 5-by-2-frame mosaics on Saturn and its rings from the sunlit (southern) side of the ring plane. This is a quick-and-dirty mosaic of one of the two sets of images (red filter only). Most previously released mosaics of Saturn and its rings from Cassini have been from the northern (shadowed) side of the rings.

On the surface of Mars, it is early winter in the southern hemisphere (Ls 105°). Today is sol 1,624 for Spirit and 1,603-4 for Opportunity. It seems to have been a quiet week for both rovers. The MARCI team continues to report clear skies for Phoenix, with a bit of water ice cloud for Spirit and Opportunity. They say that the north polar ice cap should now be at about the minimum retreat point for the summer, meaning that there's a lot of water vapor circulating around the atmosphere to make those clouds, particularly near the highest volcanoes.

Among this week's Mars Reconnaissance Orbiter HiRISE releases is an eye-straining one that, at first, looks like they forgot to focus the camera; but if you look elsewhere in the picture, you can see it's as sharp as HiRISE ever is. The "out-of-focus" look is caused by an exceedingly dustly landscape, found near the Tharsis Montes; thick dust has piled up and totally obscured the detailed topography of the area. This would be a truly lousy place to send a lander. And there's another very pretty winged Martian crater over at the Mars Odyssey THEMIS website.

At the Moon, Chang'e 1 and Kaguya are currently in orbit, and Venus Express is puttering along. No new releases from any of them last week. The MESSENGER team is trickling out as new releases a bunch of the images that were published as part of their raft of papers published in Science a few weeks ago. MESSENGER is 70 days from its next Mercury flyby; it's presently 175 million kilometers from Earth and 121 million kilometers from Mercury.Rosetta is closing on asteroid (2867) Steins for its September 5 encounter, now 39 days and 58 million kilometers away. You can watch the countdown at Daniel Muller's website. I still have to write up the flyby events for you, and I promise to do that soon. I will mention that the first instrument gets turned on on Monday, August 4 -- that's when the OSIRIS ad optical navigation cameras begin a ling campaign of images (in which Steins will be nothing but a speck) for optical navigation and orbit determination purposes. Images will be taken twice a week until August 25, after which they'll be taken once a day. The rest of the instruments get switched on for the first time on September 1.Deep Impact is continuing its EPOCh observations of extrasolar planets. New Horizons is 9.8 AU from Earth and 21.0 AU from Pluto. They're going to need to widen the view of "where is New Horizons now?" beyond the orbit of Saturn, to the orbit of Uranus, pretty soon. Voyager 1 and 2, Dawn, Hayabusa, and Stardust are all in cruise mode, talking to Earth from time to time; Genesis is in hibernation.