Well, according to a release just posted on the Phoenix website, despite the success of the rasping efforts, not enough sample got in to the TEGA instrument for it to shut the doors over the sample. This time the problem was not with TEGA. The problem was that the sample material stayed stuck on the inside of the scoop. The picture below was taken at 07:55, after the attempted dump. (The dump happened some time between 07:33 and 07:49, according to the time stamps on the pre- and post-dump robotic arm camera images.) 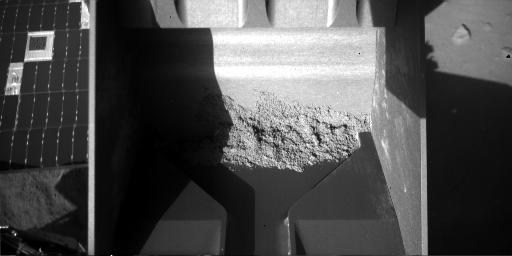 Rasped sample adhered to back of scoop, sol 60

This photo was taken by the robotic arm camera of the interior of the scoop at 07:55 on sol 60, after the scoop had been dumped over TEGA oven 0. It now appears that much of the sample remains adhered to the back of the scoop, and that too little of it fell in to the oven for the oven doors to close and begin the analysis process.
Some did fall out of the scoop (you can see the dusting of soil in the images in my previous post) but evidently it was not enough for TEGA to use. (TEGA hardly needs any -- the oven is a cylinder about 1 millimeter wide by 3 centimeters long -- so it seems most of the sample stuck.) That is a big bummer.

There is one piece of good news: TEGA did vibrate to try to get the sample inside, and the vibration appears not to have triggered the potential "high-side" short that has had the Phoenix team so worried. So this is NOT the last-ever attempt to use TEGA, as had been feared. They get to try again. It was not clear from the release whether they will try again with the open oven. They didn't indicate otherwise.