Today I caught up with Leslie Tamppari, Phoenix project scientist, to get the latest from Mars' north pole. What I was most concerned about was trying to understand the chronology and rationale of all the work they've been doing at their trench site at Wonderland, and where they think they are headed with TEGA. So here's the recent timeline in a nutshell, some of which overlaps with what I talked about from my previous conversation with Ray Arvidson.

Okay, so that covers the chronology; it's all updated on my sol-by-sol summary. I went to the Texas A & M raw images website and downloaded images that were taken by Phoenix every sol after rasping and scraping activity, and selected a few that documented some of the bigger changes to the trench for the animation below. I ran in to difficulty because the images were taken at many different times of day, so sometimes shadows crossed the trench and sometimes they did not. I tried to select and brighten the shadowed areas but didn't have a lot of time to fiddle with it to do the corrections very well, which is why you see weird snaky shadows crossing some of the frames. It's not my greatest work but it shows how things have been changing at Wonderland from sol to sol, and you can clearly see the little holes made in the trench by the rasp instrument, and how they always seem to end up pretty far to the back of the trench.

From sols 42 through 57, Phoenix worked at a trench called "Snow White" within the Wonderland area, alternately scraping the bottom of the trench smooth, exposing fresh material, and attempting to use the rasp tool to acquire samples of icy material. After three tests of the rasp tool the team was satisfied and ready to proceed with an attempt to acquire a sample for the TEGA instrument. These images were taken at a variety of times of day, and sometimes shadows crossed the surface; quick and dirty attempts were made to brighten the shadowed areas to reveal details.
Something that Ray Arvidson didn't tell me about when I spoke with him last week was a little incident with the robotic arm. I had noticed on sol 48 what I thought of as a cool image of the robotic arm scoop buried in the Martian soil. It turns out that those images were taken to document an "oops" with the arm. Leslie explained to me that after doing some measurements with the TECP, the robotic arm had been commanded to move to a different position. But commanding the arm to move actually relies a bit on onboard intelligence. The commands don't include every tiny motion of each motor -- instead, the arm is commanded to go through specific positional waypoints. (The rovers do their driving navigation the same way, moving from waypoint to waypoint.)

The Phoenix team simulates all these moves with software and often using a full-scale mockup of the lander, but there are always slight differences between the real world on Mars and the test world on Earth, and in this case some difference between the two resulted in the arm on Mars attempting to move the scoop through a space that included the ground and the rock they named Alice. This wasn't a big deal -- the lander could tell when the arm contacted the ground, and it quit executing its sequence, and waited for further instructions from Earth. The circumstances were just like any number of aborted drives that have happened with the rovers. And in the end it got me a neat picture of the arm buried in the soil. They took sol 48 to look at where the arm was, and then moved on with their work. 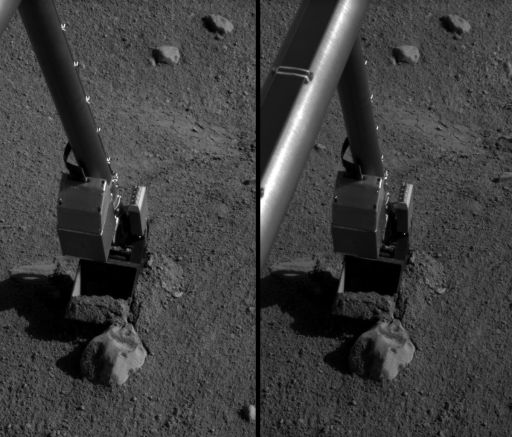 Phoenix runs in to Alice, sol 48

On sol 47, Phoenix accidentally ran the robotic arm scoop into the ground and the rock called "Alice." Sensing the contact, it paused and waited for instructions from Earth. Phoenix was commanded to take photos documenting the arm's position on sol 48, after which the team could proceed with science. This image is a crossed-eye stereo presentation of two photos taken from the right and left eyes of the mast-mounted camera; cross your eyes to overlap the images and the view should come into 3D focus.
Hopefully, next week's update will cover triumphant news of a successful sample delivery to TEGA oven 0!