A great view of the Phoenix lander

Last week the HiRISE team released a new view of the Phoenix lander on Mars, one taken from a particularly good geometry. There really aren't words to describe what a revolution HiRISE images mean for mapping landing sites. I'll let the photos speak for themselves. The colors are a result of my fiddling and are not necessarily representative of what the landscape would look like to human color vision; in any case HiRISE sees in a range of wavelengths pushed a bit into the infrared from what human eyes see. 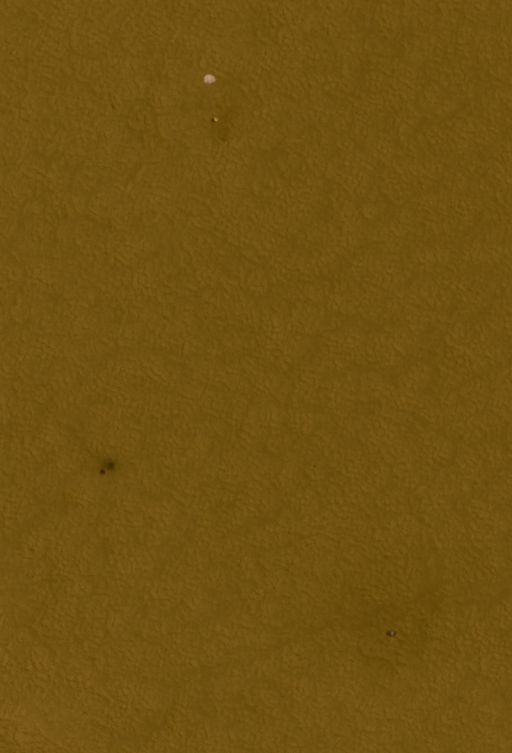 The Mars Reconnaissance Orbiter HiRISE camera captured this view of the Phoenix lander sitting on Mars on June 16, sol 21 of the lander's mission. Three components are visible: the backshell and parachute at the top of the image; the blackened heatshield (and bounce mark) at center left; and the lander itself at bottom right. Some of the amazing details visible in this image are the parachute's shroud lines, the stripes on the parachute, and the pattern of color on the lander's fan-shaped solar panels, with more reflective metal in the center and more dark blue solar cells toward the edge. 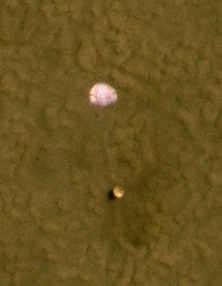 The Phoenix backshell and parachute

This one I'm showing a factor of two bigger than its actual size.

If you would like to monkey around with the images, you can use the IAS viewer to browse the original on the University of Arizona website, but because the lander (and especially the parachute) are so much brighter than the surrounding terrain, the detail was washed out in those versions. Daniel Crotty was kind enough to download the 1-gigabyte full-size images and crop out small areas covering the three pieces of hardware, sending them to me as 16-bit TIFFs: there's one for the RED channel image, and separate TIFFs for the red, green, and blue channels of the "IRB" image. You can download them here; each is about 10-12 MB: