Welcome to the Solar System, Makemake

Actually, Makemake has (probably) been in the solar system for billions of years, long before there were ever humans around who cared about how to name them. But there are humans now, and we care a lot about names, so it's a great relief that the trans-Neptunian object formerly known as 2005 FY9 now has a name: "Makemake." Makemake is the creator of humanity and god of fertility in the mythology of the South Pacific island of Rapa Nui, known to most speakers of English as Easter Island. In the three years since its discovery, its discoverers (Brown, Trujillo, and Rabinowitz) have been referring to it as "Easterbunny" (it was discovered shortly after Easter) so the official name pays cute homage to that. "Makemake" is pronounced phonetically, if you speak Spanish or Italian, or, to transliterate it for English speakers, "MAH-kay-MAH-kay." 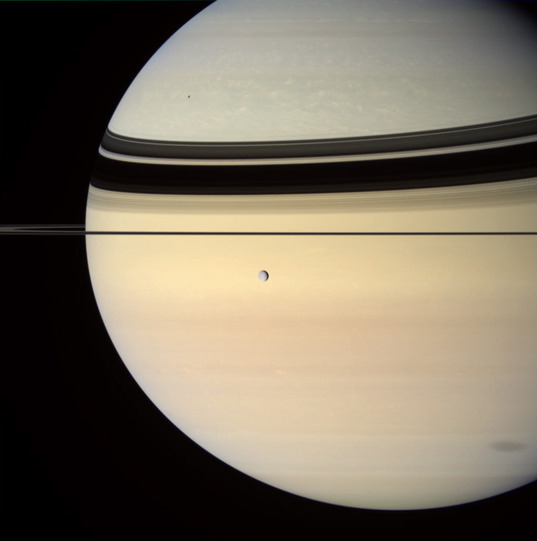 Just below Saturn's equator, the gray globe of Rhea hovers against the yellow background. The equator is marked by a thin dark band, a highly foreshortened view of Saturn's ring system. Saturn's rings cast shadows on the northern hemisphere; these shadows are dropping in latitude as the seasons proceed toward northern hemisphere spring. Above the ring shadows is a tiny dark dot, a shadow cast by one of Saturn's small moons. To the lower right of the image is a dark smudge, a shadow cast by Iapetus, Saturn's outermost large moon.

Makemake is the next brightest object in the Kuiper belt after Pluto, bright enough for astronomers to be confident that it's big enough (approximately 1,600 kilometers, roughly the same size as Saturn's second largest moon, Rhea) to become spherical under the force of its own gravity (in scientific parlance, it has likely achieved hydrostatic equilibrium). Now that it has a name, Makemake is therefore the fourth dwarf planet in the solar system, according to this page on the United States Geological Survey's Gazetteer of Planetary Nomenclature (the others being Ceres, Pluto, and Eris). I've updated our "Notable Trans-Neptunian objects" page to reflect the new name.

Mike Brown has an enlightening blog entry on the naming of Makemake here.