A very long time ago a reader wrote to me to point out that my Images of Earth from Planetary Spacecraft page was lacking most of the photos taken by the Zond program (the unmanned Soviet lunar program that was flying at the same time as the American Apollo program). I have (finally) taken many photos from Don Mitchell's excellent page on Soviet Moon images and updated my page. Here's a gem, from August 11, 1969. Since that time, world population has increased by more than three billion... 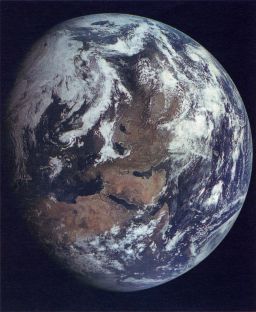 Zond-7 photographed Earth on August 9 and performed two photo sessions at the Moon on August 11, 1969. It shot 35 pictures with the SKD camera and 300 mm objective, on 5.6 by 5.6-centimeter frames of color and panchromatic film.
P.S. HiRISE Investigation Scientist Nathan Strange pointed out that I was missing Mars Reconnaissance Orbiter's views of Earth and the Moon as well, so those are now added to the page, too.