What's new in the solar system this week?

As has been the trend for the last few weeks, there aren't a lot of close encounters planned for the Cassini mission, which continues its stable once-per-week orbits of Saturn; it just this morning passed periapsis (its closest approach) of Rev 76, crossing to the sunlit side of the rings. With the once-per-week orbits, periapsis happens on Mondays and apoapsis on Thursdays. However, even if there aren't a lot of flybys happening, Cassini is very busy. I have a new resource for checking up on what Cassini is doing: this page put together by "jmknapp." He takes data that is provided to the public describing Cassini's trajectory (so-called "SPICE kernels") and spits it out as tables describing Cassini's science plans. This information is probably a bit technical for some of you, but here's one exercise you can do: 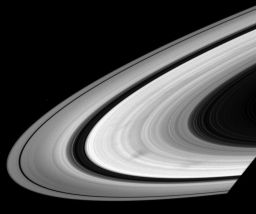 Spokes in the B ring

Spokes were not visible in Saturn's rings when Cassini first arrived, but as the planet's equinox approached they became much easier to spot, as in this image from June 3, 2008. The outer F ring shepherd moon Pandora is a tiny speck above the rings to the left.
Follow the link on jmknapp's page to "miscellaneous science activities." The page is ordered by date. You can scroll down it to today's date and see what kinds of activities Cassini is currently participating in. For instance, I'm checking at about 14:30 on July 14. Scrolling down, I find that Cassini has been commanded to observe Mimas, doing some optical remote sensing work ("ORS") with the CIRS spectrometer and ISS camera, and watching as Mimas enters Saturn's shadow. At the same time it's using its RPWS and CAPS instruments to study the energetic particles and plasma in Saturn's environment. So I know I can come back to the Cassini raw images website maybe tomorrow to find some images of Mimas, and I should check the last couple to see if they were snapping the shutter on the camera after Mimas went in to Saturn's shadow. I can also use jmknapp's page to learn more about why certain images were taken. For instance, from last week there are two sequences up on the raws page of Enceladus on July 7 and Dione on July 8. I find that the Enceladus photos were taken with CIRS being in charge of pointing but with all the other remote sensing instruments riding along (that includes ISS, UVIS, and VIMS), and that they watched it enter Saturn's shadow, and that the Dione images included only ISS and UVIS observations. Neat. Incidentally, there were also spoke observations at the same time. Cassini has been doing a lot of those. One of last week's releases from the imaging team was the spokes one at right, which looks so much like the Voyager shots -- we're getting to about the same point in Saturn's season that it was when the Voyagers passed by.

On the surface of Mars, it is early winter in the southern hemisphere (Ls 99°). Today is sol 1,610-11 for Spirit and 1,589-90 for Opportunity. Not a lot of action happened on either mission last week, as far as I can tell. The MARCI team continues to report clear skies for Spirit, Opportunity, and Phoenix, but more water ice clouds elsewhere on Mars.Phoenix is just starting sol 49. If you use Mark Lemmon's raw images pages to follow the mission you would have been frustrated over the weekend, as his site was down; it's back up now, but he still can't edit it, so the pages are only up-to-date as of sol 45. There have been lots and lots and lots of images taken since then though, so Phoenix has been busy. I've updated my robotic arm camera raw image pages to sol 48. It looks like on sol 46 and 47 there were lengthy measurements by TECP -- that's the instrument at the end of the arm that sticks prongs into the soil to measure its temperature and electrical conductivity -- and there's a neat pair of images from sol 48 showing the scoop buried in the soil, ready to dig. I will do a more thorough update on Phoenix status tomorrow or Wednesday (or after Mark gets his site working again). Oh, and James Canvin completed his work on his version of the Phoenix mission success panorama.

This is James Canvin's version of Phoenix' Mission Success Panorama, which includes 150 separate camera pointings taken from sols 13 to 43. Canvin produces his mosaics using software he developed for Mars Exploration Rover panoramas. The "click to enlarge" version is a quarter of the full resolution; click here for the full-resolution version (25 MB).
The Mars Reconnaissance Orbiter HiRISE team released a new image of the Phoenix lander on Mars last week (I'll do a separate post on that later). This one was much better than the first, which was taken under less-than-ideal conditions with HiRISE being forced to point unusually far off to one side; resolution is much better when HiRISE is looking closer to straight down. I also really like the Multiple Generations of Slope Streaks image (see below). Over at the Mars Odyssey THEMIS website, it's been a week of "THEMIS As Art," images, in which the team highlights images that contain unusual, abstract textures. And, just as I was getting this entry ready to post, the Mars Express team came in with a new image, a beautiful one of Echus Chasma. 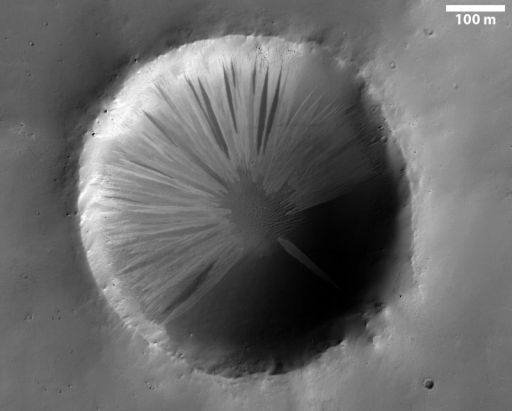 Slope streaks in a little crater in Arabia Terra

Slope streaks are thought to be caused by dust avalanches that strip away layers of dust to reveal a darker underlying surface. Here, a 600-meter crater's walls are striped by slope streaks. This is a detail from a much larger HiRISE image containing a great many slope streaks.
At the Moon, Chang'e 1 and Kaguya are currently in orbit, and Venus Express is puttering along. No new releases from any of them last week.

The big news on MESSENGER this week is that they have released to the Planetary Data System all the data from their flyby of Mercury! I will be writing more about that later this week, but if you can't wait I strongly recommend you check out Jason Perry's mosaics of the flyby images. is cruising toward its second encounter with Mercury on October 6, 84 days away. It is 182 million kilometers from Earth and 141 million kilometers from Mercury. Deep Impact is continuing its EPOCh observations of extrasolar planets. Rosetta is closing on asteroid (2867) Steins for its September 5 encounter. New Horizons is 9.5 AU from Earth and 21.1 AU from Pluto. Voyager 1 and 2, Dawn, Hayabusa, and Stardust are all in cruise mode, talking to Earth from time to time; Genesis is in hibernation.