Water on the Moon, a big impact on Mars

Analyses of orange volcanic glass brought back by the Apollo astronauts show a lot of water in the little glass spheres. They also show that the water in the lunar samples is buried too deeply within them for it to have come from Earthly contamination, or from water in the solar wind. The water had to have been in the volcanic melt from which the glass formed. But it's long been thought that the Moon never had much water, because, the theory goes, the Moon formed when a Mars-sized body slammed into Earth, seding a huge molten mess into orbit that eventually coalesced into the Moon. The process was pretty violent and they thought that pretty much everything volatile went away -- and, under those conditions, elements like sodium and potassium were considered volatile. So how can there still be so much water on the Moon? 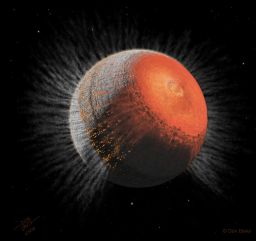 Geophysical modeling suggests that a Pluto-sized body may have slammed into Mars early in its history, erasing the cratering record of half the planet and leaving behind the low-lying, flat volcanic plains that now form the northern lowlands of Mars.
It's a stumper. And it's not the only recent big-impact story. There was also one a couple of weeks ago that invokes a huge impact to explain the Martian crustal dichotomy. If you look at topographic maps of Mars, its shape is very strange. The whole northern hemisphere is several kilometers lower in elevation than the southern hemisphere, so Mars is sort of pear-shaped. And the northern hemisphere is also incredibly smooth, in contrast to the lumpy and heavily cratered south. Now, Earth has a similar kind of crustal dichotomy; in fact, back when all the continents were clustered into one supercontinent, Pangea, it probably looked a lot like Mars, with a lumpy and bumpy highstanding continent and a much smoother, lowstanding ocean. So it's natural to assume that Mars' dichotomy arose the same way. The problem is that apart from the topographic dichotomy there is basically zero evidence for the process that produced Earth's topographic dichotomy, plate tectonics -- a combination of seafloor spreading and subduction of oceanic crust.

There is another possibility: that the northern lowlands are actually an impact basin, the largest known in the solar system. This idea has been proposed, but the evidence has also been lacking. Crucially, the basin seems misshapen, and it's certainly not circular. But other huge impact basins in the solar system, notably the South Pole - Aitken basin on the Moon, are elliptical, not circular, probably the result of glancing impacts. And new evidence on the force of gravity felt by Mars Reconnaissance Orbiter as it circles over the boundary between north and south has shown that the lumpiness of the boundary results from huge volcanoes that have erupted in the billions of years since the putative impact happened. If you correct for the shapes of the volcanoes, you wind up with a nice elliptical basin, which is pretty strong evidence for the impact theory.

One thing they didn't mention in the press release about that story is that the northern lowlands didn't have to be in the north when this whole scenario unfolded. Mars has this weird pear shape, and on top of that it has an enormous lump on one side -- it's really quite far from spherical in shape. If you model the basic characteristics of its shape, you find that it's pretty rotationally unstable unless its crust is in the current position, with the highlands and lowlands oriented on opposite hemispheres along the spin axis and the enormous bulge of the Tharsis volcanic complex aligned along the equator. No matter where with respect to the spin axis the crust was when Tharsis first formed, the whole crust probably rotated over time until it was in this rotationally stable configuration. (It is, however, an accident of history that the lowlands wound up in the north; they could just as well have wound up in the south.)