Eduardo Tesheiner was kind enough to send me an updated version of his route map for Opportunity so we can get a sense of just how close the rover is getting to Cape Verde. If you look at the map below, you can see that the Cape now stretches across a substantial portion of Opportunity's field of view -- by my measurement, roughly 150 degrees. What's going to be interesting to see as Opportunity gets closer is how high above the rover the Cape appears to stretch. Most of the rover's images are parts of "panoramas," where it has to pan its camera -- move it right to left -- to capture its surroundings. Being close to Cape Verde might require it to capture something different a mosaic where lots of vertical motion of the camera is required. If you pan your camera to make a panorama, do you tilt your camera and make a tiltorama? Sounds good to me. (Props to Andy for coining the term in this context.) 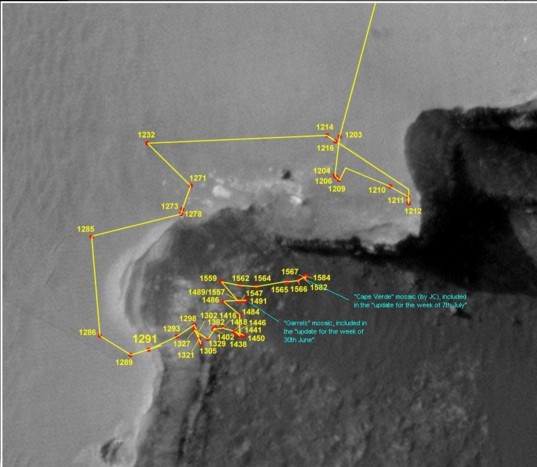 Here's a newer version of James Canvin's Cape Verde panorama, with foreground cropped and sky filled in with some artistic license. Compare the position of the rover on the map above with the view below.

This version of Opportunity's Cape Verde panorama from sols 1,570 to 1,578 has received the artistic stylings of unmannedspaceflight.com member "Astro0."

Finally, I thought this might be a useful reminder. One concern about going close to a cliff is whether the cliff is going to throw shadows that might endanger the rover's power supply by shading it from the Sun. Doug Ellison created a nifty animation that shows how the shadows move across Victoria crater as the Sun marches across the sky (Quicktime format, 2.5 MB). The animation runs twice, once with the sky directly overhead, and once with the sky at a maximum elevation of 63 degrees, which is closer to what it is right now, near the southern winter solstice. If Opportunity gets much closer to the Cape it's going to begin to get into an area where there will be some morning shadow -- I'm sure that's something the rover drivers have on their minds. The shadow situation isn't too terrible because Cape Verde strikes roughly east-west; if it were north-south, it'd throw a long shadow on one side or another of noon. It's unfortunate, though, that the cliff doesn't face north. Since it faces south, the Sun is permanently over the top of the cliff face, which means the cliff is always in shadow, and that during the middle part of the day when the rover is most active, the Sun is often lurking just above the camera, glaring balefully into the rover's eyes without doing anything useful to illuminate the cliff face. 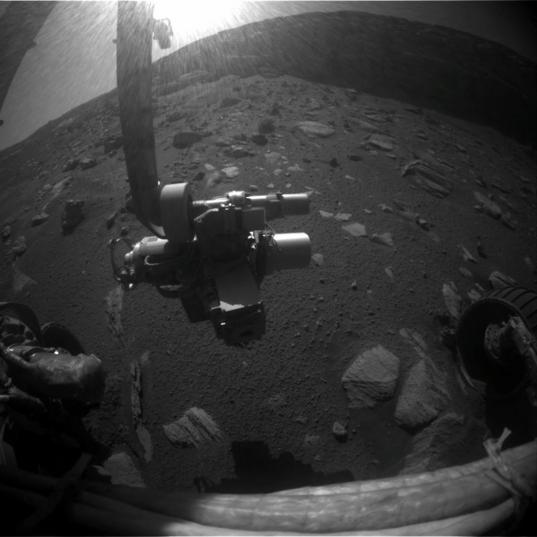 Opportunity took this image from its spot within a few meters of Cape Verde on sol 1,584. The Cape stretches to the north of Opportunity, so the Sun is constantly near Opportunity's field of view.