A summer of fun for space students

When you were in college, what did you during the summer? I got a summer job as a camp counselor a couple of years, and traveled a bit. If you are the kind of kid who won a position as one of the Red Rover Goes to Mars Student Astronauts, however, you might spend your summer at the "Ames Academy," at NASA's Ames Research Center. I probably shouldn't call Courtney a "kid" anymore -- it always irritated me when one of my former professors used to call us all "kiddo" -- but I'll have to admit it's going to be hard for me ever to think of those guys as anything but kids. Anyway, for those of you who've been wondering whatever happened to the Student Astronauts, here's one answer! 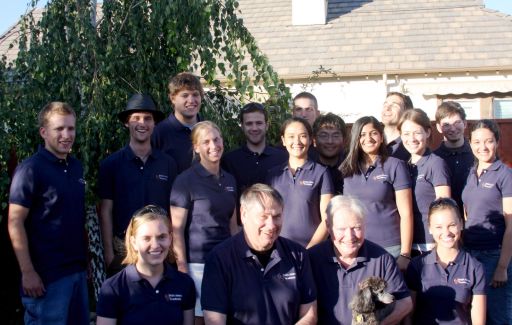 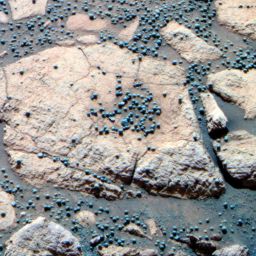 This false-color composite image, taken by Opportunity in a region close to its landing site dubbed "Opportunity Ledge," shows finely layered sediments that have been accentuated by erosion. The sphere-like grains, or "blueberries," distributed throughout the outcrop are geologic features called concretions that form in preexisting wet sediments. By studying the berry bowl scientists found that much of the hematite at the Opportunity landing site was carried in the "blueberries."
Courtney Dressing wrote to me: "I'm working with Nathalie Cabrol and another student to measure the size distribution of blueberries in Opportunity Microscopic Imager images to test the hypothesis that the spherules were formed in an aqueous environment. Our work is part of a larger analog study comparing the spherules found at Meridiani to spherules found in three locations in Chile [that is, on Earth] with different formation histories (aqueous, volcanic, or impactic). Later this summer we're going to use sieves to establish the size and morphology distributions of particles found at Salar Grande, where the spherules are believed to have formed via aqueous interactions.

"The whole Ames academy is also working on a group project trying to recreate the soil clumping observed by Phoenix by mixing different types and concentrations of salts with Mars soil simulant and water and changing the temperature from -80 C to -30 C [-110 to -20 F]. In the second phase of the project we plan to simulate the scooping process as well and hopefully run the experiment at Martian pressure if we can get access to a pressure chamber."

Courtney notes that among the members of this summer's Ames Academy, she's the only college junior; everyone else is either a rising senior (presumably their work will go toward a senior thesis) or a first-year grad student. Well done Courtney!