Emily is on vacation until June 16. In the meantime, James Canvin is providing updates on the status of Phoenix. James used to work as an extragalactic astronomer, but recently switched fields to terrestrial weather. In his spare time he works in between these two fields, following and processing data from planetary spacecraft, in particular the near-real-time raw data from the Mars Exploration Rovers and Phoenix.

As planned for sol 17, the robotic arm sprinkled a small amount of soil into the microscope and then successfully observed the fine particles.

Image of Martian soil under the optical microscope

The particles in this image are scattered across a blue sticky silicone base just 3 millimeters (1/10 inch) across. The irregular, orange-ish particles, common across the image are actually clumps of even smaller particles that still look like unresolved specks even at this resolution. It is thought that these particles are clumping together in the same way as seen at much larger scales and which caused problems getting material into TEGA. The scale bar at the lower left is just 1 millimeter long, which is the same size as each hole in the TEGA screen. I find it amazing that none of these tiny particles would go through such (relatively) huge holes; this stuff really does have odd properties.

On sol 18 the first TEGA oven was closed and the sample baked for the first time. This is a process that will take several more sols to complete and longer until we here the results, but it's great news that a sample is now being analyzed after the problems that the TEGA team have had up to now.

Sol 18 also saw the first trenching activity with the arm. Up to now all the digging has used the robot arm in 'sample acquisition' mode, where a sample is picked up in the scoop leaving a small trench as a by-product. Tosol however saw the first use of another mode where the scoop is pulled across the surface to move a lot more soil in one go and make much bigger trenches quickly. The two existing trenches have been significantly enlarged in length during this activity. However after the loose surface soil, the ground underneath is hard and the scoop is not making much headway, next week the team is planning to use the rasp tool on the back of the scoop to try and grind into this layer. 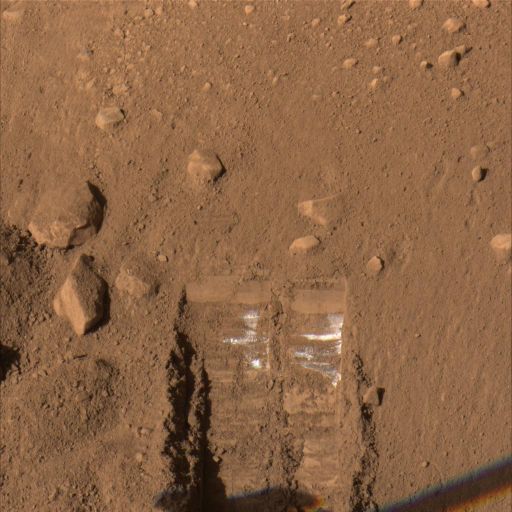 Extended trenches at Dodo and Goldilocks

The two trenches, Dodo on the left, Goldilocks on the right, were extended on sol 18 uncovering more of the white material that many believe is water ice.

inally of note, Phoenix continued to take sections of a 360 degree color panorama named The Peter Pan. In tosol's instalment some distant hills can be seen through the hazy Martian atmosphere. Nearly everybody expected the landing site to be totally flat so hills like this are nice bonus.

Hills in the distance

Part of The Peter Pan taken on sol 18 facing toward the south-west. Some beautiful distant hills appear through the hazy atmosphere.