Emily is on vacation until June 16. In the meantime, James Canvin is providing updates on the status of Phoenix. James used to work as an extragalactic astronomer, but recently switched fields to terrestrial weather. In his spare time he works in between these two fields, following and processing data from planetary spacecraft, in particular the near-real-time raw data from the Mars Exploration Rovers and Phoenix.

On the seventh and final attempt to try and shake some of the material dumped on the TEGA instrument on sol 12 down into one of the tiny ovens it worked! The team had all but given up hope that this method would be successful and were surprised when the shaking sequence ended early. Worry that something could be wrong quickly evaporated as they realized that Phoenix had terminated the shaking correctly after sensing that the oven was full. The news brought cheers and a standing ovation for Dr. Bill Boynton the TEGA lead scientist when he gave a surprise announcement at a team meeting this morning.

Phoenix also continued to take more images as part of a large color panorama named Peter Pan. The section taken tosol turned out to be a beautifully composed photo that any professional photographer would be proud of. 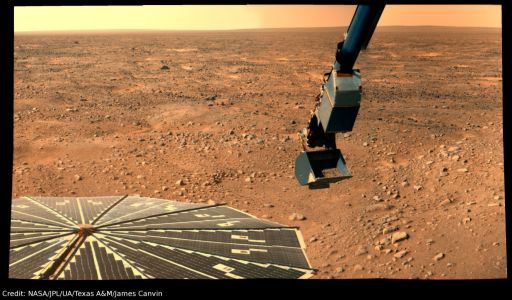 A postcard from Phoenix

This beautiful photo taken as part of The Peter Pan shows the polygon terrain to the west of Phoenix stretching off toward some low hills on the horizon. In the foreground is both the west solar array and the robot arm with the scoop in which a sample of Martian soil destined for the optical microscope can be seen.

Looking ahead, the analysis of the sample now inside TEGA will start the sol after next. The news that a sample had been successfully delivered to an oven arrived too late in the day for any work with the sample to take place nextersol. So sol 17 will focus on getting some of the material currently in the scoop to the microscope as previously planned. After experiencing the unusual and unexpected properties of the soil over the last few sols the team is looking forward more than ever to getting these samples analyzed using the array of instruments on Phoenix.