Phoenix made the all-important first grab for a sample of soil yesterday, sol 11, at a site named "Baby Bear." This dig wasn't really any different from the first dig it made at Dodo -- the trench seems to be about the same size -- but this time, they didn't dump out the scoop; they tilted the scoop upward to let the sample slide into the back, and then rotated the arm to position it over TEGA. And that's where Phoenix left things yesterday. Here's the three press-released images today, which ably document the activity. First, the new trench site: 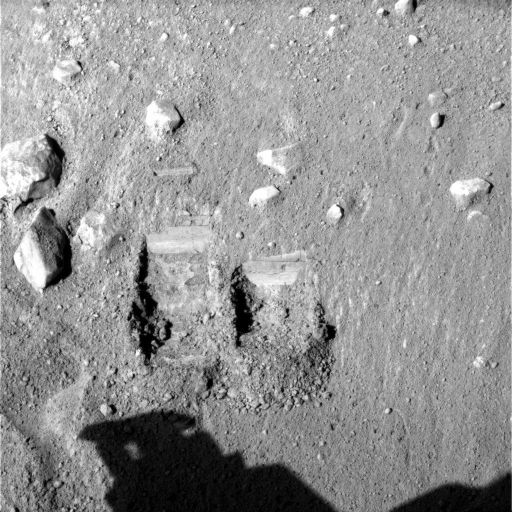 The trench on the left is named "Dodo" (for the character in Alice in Wonderland, the site of Phoenix' first two dig-and-dump tests on sols 7 and 9. Next to it is "Baby Bear," dug on sol 11 in order to collect the first sample for the TEGA instrument. The same trench will be used to acquire a sample for the optical microscope, and then a new trench at a site named Mama Bear, immediately to the right, will be dug to acquire a sample for the we chemistry laboratory.
Next, a view inside the scoop: 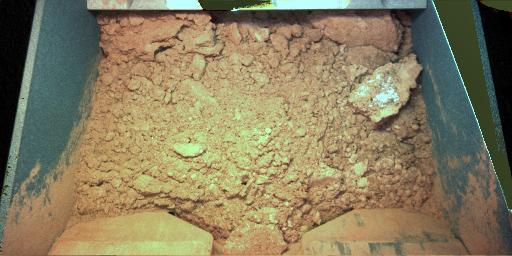 After digging up a sample at Baby Bear on sol 11, Phoenix shot a photo of the interior of the scoop with its robotic arm camera. Note the large clod of soil to the right, which appears to be white under a coating of dirt. For scale, the whole scoop has a width of 8.5 centimeters (about 3.5 inches).
Here's a shot from the mast-mounted camera of the arm with its scoop of soil, poised over the rooftop shape of the TEGA instrument, with the doors on TEGA oven #4 open on the far side, over the roof. You can see that the left-hand door still has not come all the way open. You can also see the Phoenix DVD in the background. 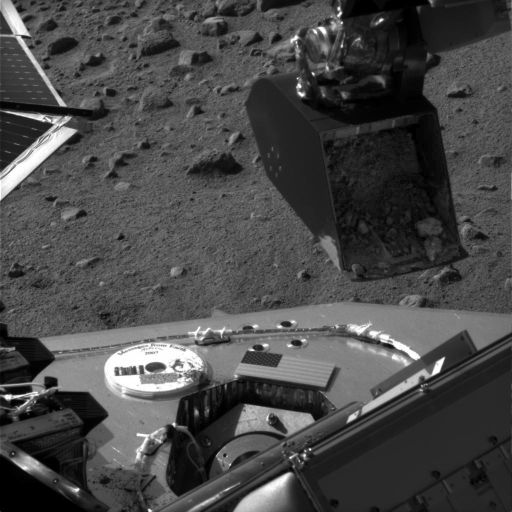 On sol 11, Phoenix gathered its first scoopful of soil from the Martian surface and brought it over the TEGA instrument. One set of TEGA's doors is open and waiting to receive the sample. Note the large clod of soil at the right edge of the scoop; in closeup views from the Robotic Arm camera, this clod had whitish features. TEGA's ovens are protected with a one-millimeter mesh, allowing only smaller soil particles to enter. After the scoopful of soil has been dumped onto TEGA, the hopper inside will vibrate, shaking soil bits down into a sample oven about two millimeters wide by three centimeters long.
Finally, here's a raw image, evidently taken by the robotic arm camera after moving the scoop into position over TEGA; the bucket is tilted further away from the camera than it is in the image above (the camera is fixed to the robotic arm's "forearm", while the bucket can pivot back and forth at the wrist). You can see that one big white clod has rolled to the front of the bucket. 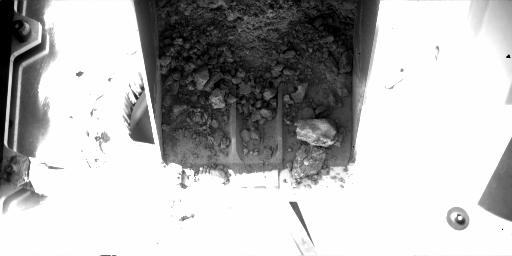 View inside Phoenix' scoop, ready for delivery to TEGA

The Robotic Arm Camera shows what the inside of the scoop looks like as Phoenix is poised to dump its first sample into the TEGA instrument.
Matt Robinson, the team lead for the robotic arm flight software, said that they scooped a rather large sample filling a quarter to a third of the scoop to make sure they had enough to drop through the partially-open door on the oven, but not so much that they buried TEGA in dirt. He was ecstatic that they got exactly as much dirt as they wanted to on their first try. The robotic arm can't "see" the ground -- it's commanded from Earth to move a certain distance, rotate the scoop at a certain point, all based on digital elevation models of the terrain derived from camera images plus ground truth derived from their first two practice scoops. The fact that they got exactly as much sample as they wanted says their computer models of the world around Phoenix are spot-on. That they also managed to dig very close to the original site, Dodo, without any cross-contamination between the two trenches was an accomplishment to be proud of too.

So now the plan is to deliver the sample to TEGA tosol, and then wait for verification from TEGA that the sample was collected successfully. Over the next few sols, they'll grab a second sample from the same Baby Bear site, a much smaller one this time, and deliver it to a fresh Optical Microscope slide. Then they'll go next to Mama Bear to grab a sample for the wet chemistry lab. This is all an arduously slow process. Dig, photo the scoop, move the scoop over the instrument -- that's one sol. Deliver the sample, and check the scoop to make sure it's empty, and find out if the instrument is happy with its sample -- that's another sol. Start up the analysis -- that's a third sol. For TEGA at least, the analysis then takes a minimum of four sols, and probably more. One complete sampling cycle, delivering samples to all three instruments, is supposed to take eight sols; it might be more if there are anomalies, and less if they don't use all the instruments. (There are eight TEGA ovens but only four wet chemistry cells.)

That's about it for today. I do want to announce that, with a lot of help from Michael Howard, the author of the fabulous Midnight Mars Browser software, I'm now producing my own set of browse pages for the Phoenix raw image data, sorted by sol, and delivered with a lot of "metadata" describing the timing, pointing, filter choices, and other facts for each of the images. I hope people find these pages useful! Today, in addition to the photos I posted above, they also downlinked a massive quantity of data from Sol 10, the "runout" sol. It was much more productive than the first runout sol, sol 2 -- looks like the Phoenix team has been hard at work building extra sequences to take full advantage of the occasional communications problem.