Report on Phoenix Sol 9 activities: Ready to get samples; but Odyssey is in safe mode

BREAKING NEWS: Mars Odyssey has gone into safe mode, which does happen from time to time so is not, in itself, alarming; however, because of the ongoing problems with Mars Reconnaissance Orbiter's radio, Phoenix has been reliant only on Odyssey for communications. So Phoenix did not receive its sol 10 instructions today, and will be doing a "runout" sequence instead. According to a press release I just received, "That sequence includes instructions for the lander to continue taking images required to assemble a full-color 360-degree high-resolution panorama."

The good news is that Mars Reconnaissance Orbiter can be used again for communications, and is ready to receive tonight's downlink. Further good news is that Mars Express is still in occasional radio contact with Phoenix, for the purposes of testing its orbit-to-ground radio (my understanding was that it was originally planned for Mars Express to be talking with Phoenix occasionally for at least the first two weeks of the mission.) Perhaps (and this is just me musing here, I have no official information on this speculation) it may be able not just to test the link but actually serve in a communications capacity for Phoenix.

oday was the first televised Phoenix press briefing since last Friday. I can't say they had a lot of news to report, beyond "all's well." Actually, the best news I heard from yestersol came not from the press briefing but from the Phoenix Twitter feed, which reported that Phoenix' working hours had been upped by fully 50 percent. Until now Phoenix has been operating from 09:00 to 16:00 local solar time, but the power situation has been good enough that they've extended operating hours from 08:00 to 18:30. That's a huge deal; I hope it gives them lots more time for imaging, in addition to all the preplanned arm-related work.

Peter Smith reported that all instruments are checked out and ready to receive samples, which I guess means that Phoenix has successfully completed the "characterization phase" and is on to the science phase of the mission.

On sol 9 they retried their dig-and-dump operation and they seem to be pleased with how it went. A second dig at the site they dug yesterday has widened that faint whitish streak into a veritable whitish swath within the trench: 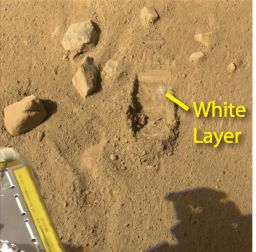 After a second dig attempt at a trench site called "Dodo," Phoenix' robotic arm uncovered a wider swath of white material, which could be ice, salts, or some other, more exotic material.
This stuff could be ice, but it's about equally as likely to be salts. It could even be something else; Spirit uncovered white material just below the surface within Gusev crater that turned out to be silica. However, Peter said it was very doubtful this was silica, because the geologic context of this site is so different. Spirit is in a volcanic environment; the origin of the material at Phoenix' site is more likely to be sedimentary, so if it's not ice, it's probably salt. Peter said that the science team has been having "impassioned discussion" about what exactly it is. Regardless of which it is, the Phoenix team can't wait to get this stuff into their analysis instruments, TEGA and MECA.

So tosol, sol 10 tomorrow, sol 11, Phoenix will finally gather its first sample of material, to be delivered to TEGA. My understanding is that Phoenix will take the sample tosol and take photos of the sample inside the scoop, which will be downlinked tonight. If they like what they see, they'll command Phoenix to deliver the sample to TEGA tomorrow the day after tomorrow. Unfortunately, despite Peter's confidence yesterday, it looks like the TEGA door didn't snap completely open. Still, he thinks they can get a good sample inside even with the door only partially open.

They did get a much better look at Holy Cow yestersol. 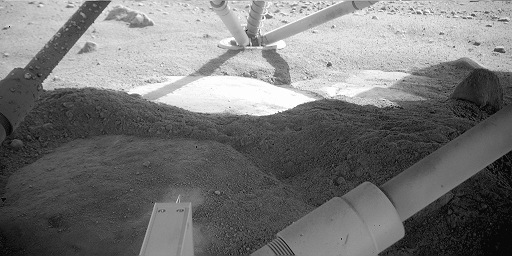 On sol 8 Phoenix used its robotic arm camera to acquire a set of images on "Holy Cow" with a variety of exposure times. These images were merged, to permit better views on the possibly icy material found there, in both the shadowed regions under the lander in the foreground and sunlit regions in the background. The new images reveal that the flat layer continues underneath each of the lander thrusters, and that the thrusters have built a ridge of dirt between them.
For comparison, here's the sol 5 image, which is saturated at both ends of the spectrum, so you can't see much detail either in the shadows or in the bright areas. Now that you know what details are visible based on the above image, you can see those details in the image below, but it sure helps to have the better exposed view. 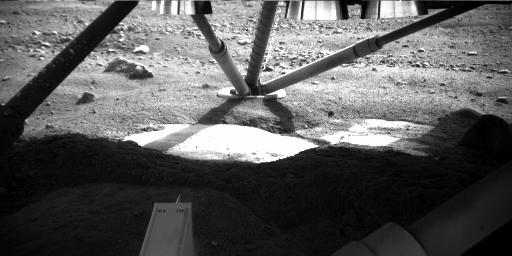 This image was acquired by Phoenix' robotic arm camera on sol 5 at 14:47:02, and shows some smooth, relatively bright material located beneath the lander. Could this be ice?
Another cool image they released today is this "reachability map," showing the regions in which the arm can be operated safely. 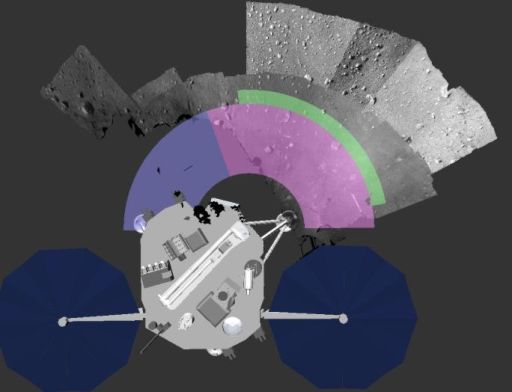 Phoenix' robotic arm can dig within all the locations in the pink area on this "reachability map". The arm can reach slightly farther to place the soil conductivity and temperature sensor within the green area. Phoenix can dump soil into the purple area, but cannot dig there. The dark blue regions are the solar panels.
Note that Snow Queen is not even within the purple dumping area; it's on the other side of the lander footpad from the dumping area, underneath the lander deck. So you can see why it's impossible for them to scrape Snow Queen with the arm, and why it may be impossible to get any closer than they've already gotten to try to take color pictures.

On the panel today was one Haraldur Gunnlaugsson, who provided the "telltale" windvane to the meteorological experiment. He said that although it's still early in the mission they've already noticed a definite pattern to the winds: in the beginning of the day the wind comes from the south, but by midday the wind has rotated 180 degrees and is coming out of the north. By the afternoon, the wind is out of the south again. He said that knowing this would help their digging strategy -- that they would time digging so that any dust lifted up by the digging process would blow away from the work volume rather than into it. Neat. He did not comment on what many of you readers have noticed, that the telltale appears to be bent, so that it leans to the east; I've got an inquiry in on that question.