Report on Phoenix Sol 8 activities: An extra day to learn how to use the arm

I've generally been posting twice a day on Phoenix: one post about the morning press briefing, which is based on the night's work done by the science team and which includes information about the commands that have been sent up to Phoenix for its day of operations, and then once in the evening, when Phoenix' images hit the ground. But with the Mars day being 40 minutes longer than the Earth day, that evening downlink has been getting later and later. I did see new images last night, but not until nearly midnight, way too late for me to think coherently about them, much less write. So, for a while anyway, I'll be seeing Phoenix' downlinked images for the first time in the morning, rather than in the evening.

The slipping of Mars time means that today the science team is reporting for the day's duty at 10:45 pm local time. That's gotta be hard on the brain. Today's press briefing featured only Peter Smith, and he sounded upbeat and excited but also made several remarks indicating that he's suffering the kinds of problems anyone has when they are sleep-deprived -- such as more trouble with recall, both short- and long-term. I hope Peter plans to take a couple of days off soon -- Phoenix must go on but he won't be doing any service to the mission by working himself into incoherence. Back when they were preparing for the Mars Exploration Rovers to land, Steve Squyres required all the mission personnel to take seminars about sleep issues, how to deal with sleep deprivation, and what happens if you don't, and he instituted fairly draconian policies to require people to take time off to get proper rest. I hope they are doing the same for Phoenix.

Anyway, getting on to today's activities. It's sol 9 for Phoenix now. Yesterday, they had said their sol 8 plan included the completion of the opening up of the TEGA instrument; the first sample acquisition; and stereo imaging of "Holy Cow," the bright, white, tabular material that might be ice seen underneath the lander. Well, after seeing the downlink from yesterday, they changed their minds a bit. They decided, Peter said, that "the team is not yet comfortable with the digging and dumping process." He said they want to do another test dig and dump and document it better with the camera this time, "so we feel more comfortable with how material is interacting with the scoop, and how the scoop is interacting with the soil." I asked about the clod of dirt seen above the TEGA instrument on the deck, and he said that that was part of the issues that they were working out. Apparently, Peter said, after their test dig and dump, some dirt remained (unbeknownst to them), lodged in the scoop. Then, when they moved the arm into position for the arm camera to photograph the opening of TEGA, and they moved the scoop out of the way in order to take pictures, the dirt fell out onto their deck. "We need to be more careful when we take pictures" of stuff on the deck, Peter said.

Another thing he mentioned is that after they did their test dig and dump, they had a terrible time locating the dumped pile of sediment in their images; it was only after they'd made a blink comparison image that they could spot the new little pile.

A blink animation, before and after, shows the spot on Mars where Phoenix dumped its first scoop of soil.
The TEGA ion source issue seems to have worked out well. Peter said that the backup filament turns out to be even more sensitive than the primary filament. He remarked that Bill Boynton, the lead scientist for TEGA, "was trying to explain to me how that works, and I couldn't explain it to you." Which I thought was funny.

However, there was a new, minor problem with TEGA today. The last step in preparing TEGA to receive a sample is to open the doors, like a set of shutters, over one of the sample ovens. When they got their picture back, showing TEGA after the door opening command, one of the doors had clearly failed to open completely. Peter said that this is "not what we expected" but that he had every reason to expect that once the lander warmed up during the day, the spring mechanism should pop the door completely open. Even if it doesn't, he said they tested the sample delivery process (presumably using the engineering model in their sandbox at Arizona) with partially open doors, and "we know we can get a sample into our oven even with the doors partially open." He stated that "this is not a serious problem." 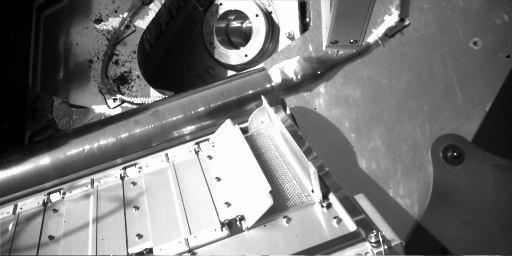 On sol 8, Phoenix was commanded to open the first of eight sample ovens on the TEGA (Thermal and Evolved Gas Analyzer) instrument. The shutters covering the first oven only partially opened: the right side shutter opened completely, but the left side shutter opened only partially. The team believes that even if the doors remain only partially open, they are wide enough for a sample to be delivered successfully to the sample chamber, which is covered by a screen.
He said that the comm problem with Mars Reconnaissance Orbiter has not yet been solved. Electra, the UHF radio system that the orbiter uses to communicate with the ground, works "90% of the time." He said that "What the problem is, is an area of intense investigation." So they're still on Odyssey only for communications.

Here was an interesting one. Remember that spring or pin visible lying on the ground near one of the footpads? Peter said that they haven't figured out what it is yet. "Nobody's laying claim to it. It obviously came from the spacecraft. Spacecraft are usually designed not to drop things. We've asked the spacecraft team where it came from; they say it probably came from the science payload." And, conversely, the science team is saying, no way that the object could possibly have come from any of their instruments. "We're trying to get someone to fess up here, but they're reluctant."

Many people have asked me where the temperature measurements are coming from -- the deck? The mast? The surface? So I asked Peter that question and he said, "We have not measured the surface temperature. There's three thermocouples [on the mast] from about a meter above the surface to about two meters over the surface, and the temperature at the top of the mast is coldest and bottom is hottest. The hottest temperature is next to the deck itself, extra heat coming from the spacecraft. We see a gradient. Late in the afternoon there's a lot of fluctuation, as cells of heat blow by the lander, hot - cold - hot - cold very rapidly. You're heating the surface, hot air is rising, cool air is coming down to replace it. The surface temperature we are anxious to determine."

One more fun picture came down last night. Captured on Sol 8, it shows part of Mars, the lander deck, the robotic arm scoop, a bit of solar panel, and the DVD. And, if you look closely at the DVD, you can see that the messy robotic arm has dropped a clod of dirt on it, too. Stuart Atkinson joked that "our names are on Mars, and now Mars is on our names!" 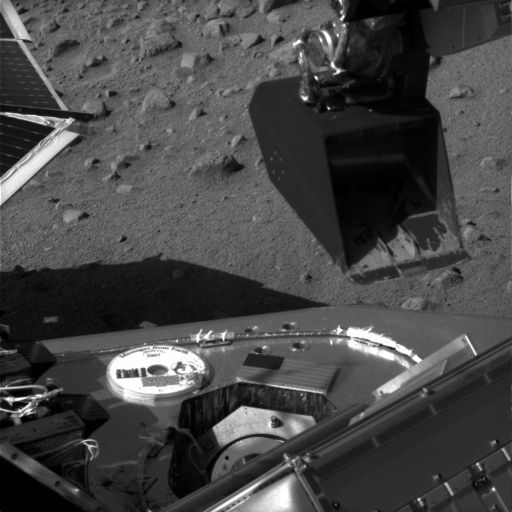 This image, from sol 8 of Phoenix' mission to the Martian northern plains, shows the Phoenix DVD sitting on the deck of the lander. The robotic arm scoop, visible in the top of the image, has inadvertently dropped a clod of dirt onto the DVD.