Phoenix digs into the dirt

Tonight's downlink from Phoenix proves that the lander has dug up a scoop of dirt from the surface of Mars for the first time. Here's a crossed-eye stereo view, similar to the one I posted earlier today of Yeti -- you can see many of the same rocks. But the Yeti's footprint has been replaced by a squarish scoop cut in to the Martian soil.

Site of Phoenix' first scoop into the Martian dirt

On sol 7 of its mission to the Martian northern plains, Phoenix dug in to the Martian soil for the first time. This is a crossed-eye stereo view, taken through the left and right eyes of the mast-mounted camera; cross your eyes until the two images overlap to make it appear three-dimensional.
And, just to prove it worked, here's the inside of the scoop! That robotic arm camera is handy. 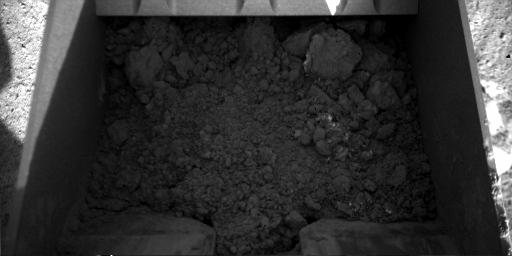 On sol 7, Phoenix dug into the Martian dirt, and captured a photo of the soil sample with its robotic arm camera.
If I'm not mistaken, this operation was supposed to include a "dump" of the soil inside the scoop, but I'm not confident I can identify an image chronicling that -- so for that I'll have to wait until tomorrow's briefing.