Jason Perry's sharp eyes have caught Phoenix' blackened heat shield and bounce mark in the panoramic view released by the Phoenix team today. Compare this view to the ones taken from above by HiRISE. They confirm that the large "splat" seen from space is a bounce mark, and the sharper circle is the heat shield. 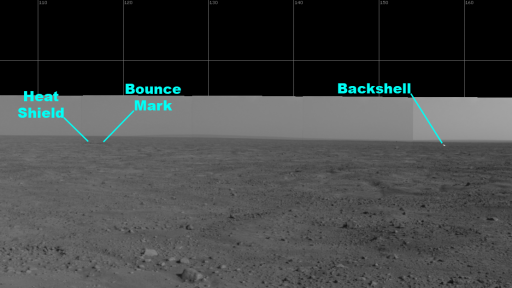 The first panorama taken by Phoenix includes sightings of the hardware that helped protect it during its trip to the surface of Mars: the backshell and parachute, which had already been spotted as a bright spot in the distance, and the blackened heat shield and bounce mark. The low-angle perspective helps to confirm which of the two objects is the heat shield and which is just a bounce mark, which was ambiguous in the bird's-eye view photo taken by Mars Reconnaissance Orbiter.
Also, for the 95% of the world that uses the metric system, here is a version of the panorama they released today with rock measurements in centimeters instead of inches. The fact that they'd initially released it in inches only is why I didn't post it earlier. Science is done using metric units, so metric units should be used to report on science. I'm perfectly capable of using both -- I use inches for sewing and home improvement and centimeters for science, and I'm not at all confused by it!

Dimensions of some rocks in the Phoenix workspace

This panoramic view shows the Phoenix "workspace," the area within reach of the robotic arm.