A full panorama and an unstowed arm

A late-night check of the Phoenix image website shows that not only did Phoenix succeed in acquiring all the rest of the images for its first full panorama today, but it also successfully downlinked them all to Earth. Without further ado:

By the end of its third day of operations on Mars, Phoenix had assembled a complete panorama of its surroundings. This image was automatically assembled from many individual frames, so there are seams between images and mismatches where lighting conditions and filter choices were not identical from frame to frame. The image also shows that the robotic arm has been successfully unstowed; the scoop is poised in the air.
The completeness of the panorama is not the only good news. This image makes it abundantly clear that the unstow of the arm is successful. They didn't belabor this point in this morning's press briefing, but the Phoenix mission would have been a scientific failure if that step had not worked. Remember, this mission is not about roving around the countryside; its journey will be a vertical one, exploring Mars from the surface downward. The unstow of the arm was the most critical event remaining for the mission, and this image shows that they can now proceed.

Also, I think that the full-pan view of the one solar panel is very pretty. There's something aesthetically pleasing about the fan-shaped panels. The rovers have their bat wings, and Phoenix has its Asian-inspired fans. Very nice.

Here's an alternative view of the same image, reprojected so that we are looking down on to the lander. You can see how the camera's mast is off-center from Phoenix' deck, so it gets a better view down into the arm's work volume than into the area underneath other parts of the lander. This is the projection you would want to use if you wanted to compare the polygonal patterns in the terrain around the lander to the views from above, from Mars Reconnaissance Orbiter. 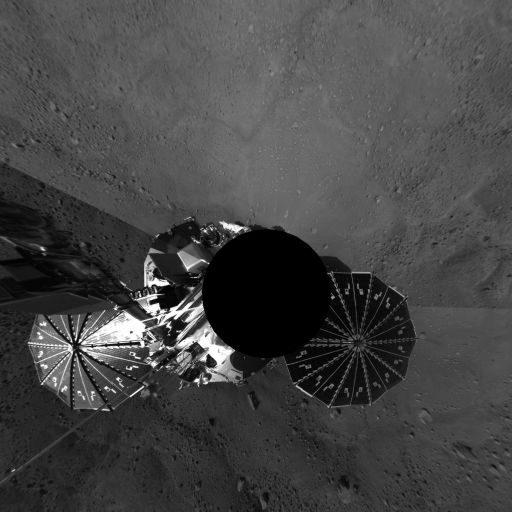