When -- if -- Phoenix lands safely on Mars, it will carry with it a mini-DVD, provided by The Planetary Society. The DVD, titled Visions of Mars, contains hundreds of thousands of names, sent by people who are moved by the idea of their names landing on another planet. But in addition to that, the DVD contains works of art, literature, and spoken word, all inspired by Mars (as it exists, or as it was once imagined), as well as recorded greetings from space visionaries. I encourage you to check out its contents.

There is also more Martian art to be found at the spacEurope blog, where Rui Borges has today announced the results of a contest he ran for Mars visionaries to imagine how the landscape will appear to us when Phoenix returns its first postcards Sunday night or Monday morning. Here's the winner: "So few rocks," by Doug Ellison. 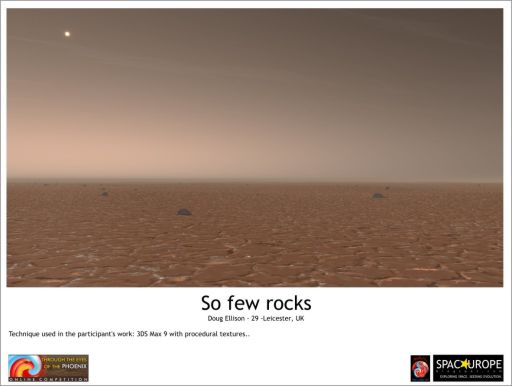 One vision of what the landscape will look like to Phoenix when it lands on Sunday, May 25, 2008.